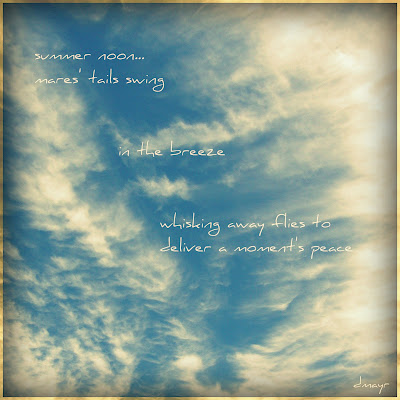 © Diane Mayr, all rights reserved.
Posted by Diane Mayr at 6:54 AM No comments: 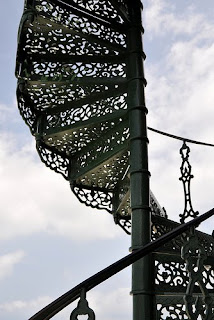 Here's a love poem, a simple expression of one person's desire to be nearly invisible to her beloved, yet always there as a measure of security and steadfastness.

A Petition
by Amy Lowell

I pray to be the tool which to your hand
Long use has shaped and moulded till it be
Apt for your need, and, unconsideringly,
You take it for its service. I demand
To be forgotten in the woven strand
Which grows the multi-coloured tapestry
Of your bright life, and through its tissues lie
A hidden, strong, sustaining, grey-toned band.
I wish to dwell around your daylight dreams,
The railing to the stairway of the clouds,
To guard your steps securely up, where streams
A faëry moonshine washing pale the crowds
Of pointed stars. Remember not whereby
You mount, protected, to the far-flung sky.

Don't you just love this line--"The railing to the stairway of the clouds"?

Visit the Book Aunt for this week's Poetry Friday Round-Up.

Photo by Kevin H.
Posted by Diane Mayr at 6:56 AM No comments: 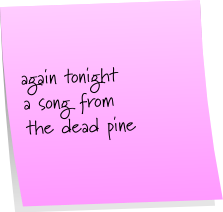 © Diane Mayr, all rights reserved.
Posted by Diane Mayr at 6:29 AM No comments: 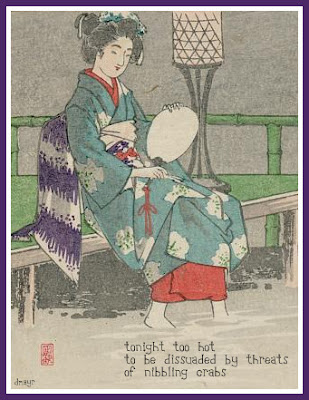 As you can see, it is in two languages, French and English, which only adds to the exotic feeling I get from visiting it. So what does it have to do with poetry? Nothing other than it could provide a great writing prompt--or two or three. Write about lost items from your past (and please resist the urge to write about the time you "lost" your heart). Write about one of the lost items on the site. Select a few of the French words and work them into a poem. Take a walk, or a ride, purposefully looking for objets perdus. Snap a photo with your camera or cell phone and write about the photo, rather than the item itself.

Oh, I almost forgot to mention that each objet comes with GPS coordinates, which you can plug into Google Maps and be introduced to new places. Then you can people these places with your poetic imagination!

I tried a few exercises, and through a combination of things, I came up with: 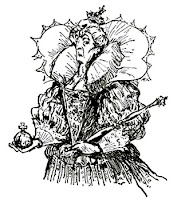 On eBay I bid on a
box of old photographs
and win not knowing
the lives of someone's
lost relatives would
become mine by default
to shape and direct,
destroy, resurrect, to
manipulate. A world
conquered by the
queen of words who
has no life of her own.

The Poetry Friday Round-Up is being hosted Tabatha Yeatts: The Opposite of Indifference.
Posted by Diane Mayr at 12:01 AM 7 comments: 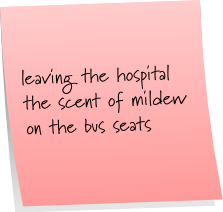 © Diane Mayr, all rights reserved.
Posted by Diane Mayr at 6:59 AM No comments: 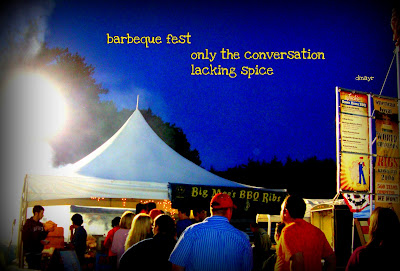 © Diane Mayr, all rights reserved.
Posted by Diane Mayr at 6:40 AM 2 comments:

Poetry Friday--What Are You Doing Instead?

Regularly writing poetry is a hard routine for me to maintain. I did well for nearly two years then fell off. Now, if I write it's generally on the weekend. I'm not sure what's gone, but something has left the building.

Grace Paley tells us what she has done instead of writing a poem;

this does not happen with poems

[I tried to preserve, as best I could, the spacing between words. An odd use of space and no punctuation! It does, however, make it more interesting since I have to wonder why she chose to lay out the poem this way?]

What do you do instead of writing poems? Can you write a poem about not writing a poem? Give it a shot! Here's one from me:

With skies clear
a passel of sparrows
swooping past the open
window singing, the
frenzy of one fat
cat invalidates proposed
phrases of pastoral
beauty. Nothing now
but to watch life
unfold before my eyes.

Spend the morning at A Year of Reading where Mary Lee is gathering armsful of poems for this week.
Posted by Diane Mayr at 12:01 AM 1 comment: 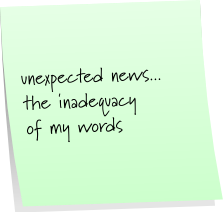 © Diane Mayr, all rights reserved
Posted by Diane Mayr at 6:10 AM 1 comment: 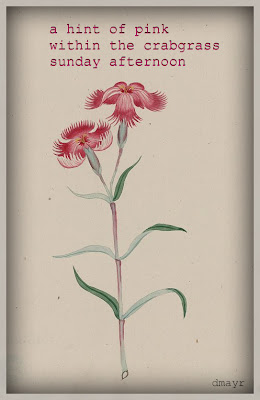 © Diane Mayr, all rights reserved. Image courtesy Library of Congress.
Posted by Diane Mayr at 6:26 AM No comments:

Perhaps somewhere in the recesses of your mind, the pair, Archy and Mehitabel, ring a bell. A musical duo? The tap-dancing sensation from the 1930s? A cockroach and a cat?

If you said "a cockroach and a cat," you are correct. Archy and Mehitabel were the creation of the humorist and newspaperman, Don Marquis.

THEY ARE THE MOST UNLIKELY OF FRIENDS: Archy is a cockroach with the soul of a poet, and Mehitabel is an alley cat with a celebrated past--she claims she was Cleopatra in a previous life. Together, cockroach and cat are the foundation of one of the most engaging collections of light poetry to come out of the twentieth century.

You may have heard Garrison Keillor read one of the 500 sketches that Marquis wrote about the characters, on The Writer's Almanac (Minnesota Public Radio). Here he reads "the lesson of the moth," which begins:

'Tis the season for moths and porch lights, go outside and enjoy it!

Head over to Wild Rose Reader for this week's Round-Up.
Posted by Diane Mayr at 12:01 AM 2 comments: 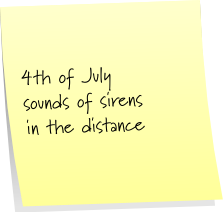 © Diane Mayr, all rights reserved
Posted by Diane Mayr at 6:52 AM No comments: 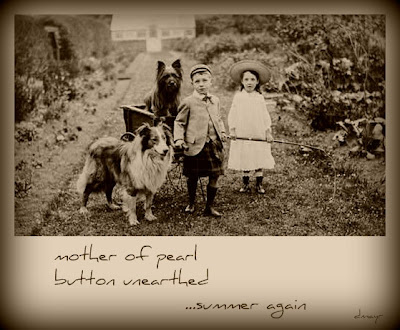 I've seen slugs, but up until 2000 I had never seen a living land snail! When I finally saw one, I was intrigued by the delicateness of its shell as compared to the slimy nakedness of the slug.

Here is a pretty snail poem by Thom Gunn:

The snail pushes through a green
night, for the grass is heavy
with water and meets over
the bright path he makes, where rain
has darkened the earth’s dark. He
moves in a wood of desire,

pale antlers barely stirring
as he hunts. I cannot tell
what power is at work, drenched there
with purpose, knowing nothing.
What is a snail’s fury? All
I think is that if later

I parted the blades above
the tunnel and saw the thin
trail of broken white across
litter, I would never have
imagined the slow passion
to that deliberate progress.

The most recent issue of Haiga Online, "Iris Fields," issue 12-1 June 2011, is now available and it includes the results of regular feature of the journal, "Haiku this Haiga!" For this issue contributors were presented a snail painting by Mary B. Rodning and were asked to come up with a haiku to pair with the picture. From all the entries one by Michael Dylan Welch was chosen as the winner. His haiku was translated into Japanese and calligraphed; bamboo flute music was added. A slideshow of all the haiku entries, including mine, is included also. You can view the slideshow by going to this page, then clicking on "Traditional Haiga." Enjoy!

Although I've titled this post, "Snails," I would be remiss if I neglected to mention the rhyming picture book by David Greenberg, illustrated by Victoria Chase, Slugs. My kids used to love the book when they were in elementary school! I think it may still be available in paperback. A word of warning, it is not for the faint of heart! The humor is very black.

Stop by A Wrung Sponge for the first Round-Up of the new 6-month Poetry Friday schedule.
Posted by Diane Mayr at 12:01 AM 7 comments:

A discussion of George Orwell's "Six Rules for Writing" is found here.

When we’re dancing with the angels, the question we’ll be asked: In 2019, what did we do to make sure we kept our democracy intact? Did we stand on the sidelines and say nothing?
~Elijah Cummings

What is a cherita? A haiku-like poem of three stanzas that tells a "story." The first stanza is one line and sets the scene. Stanza two is two lines, stanza three is three lines.