When I read the July 28 headline, "It's so hot in New York that manure is bursting into flames," my mind immediately went to the presidential candidate born in that state. Wow! Someone better start worrying about climate change! I thought. I amused myself greatly with imagined headlines from the supermarket tabloids: "Melania's desperate 911 call" "Gone! In a puff of smoke! Maid reports"

The statement above, if combined with today's haiku, would qualify as a haibun (prose + haiku). Instead I used the haiku for a haiga. The photo is from the NYPL Digital Collections, it was taken in 1936. 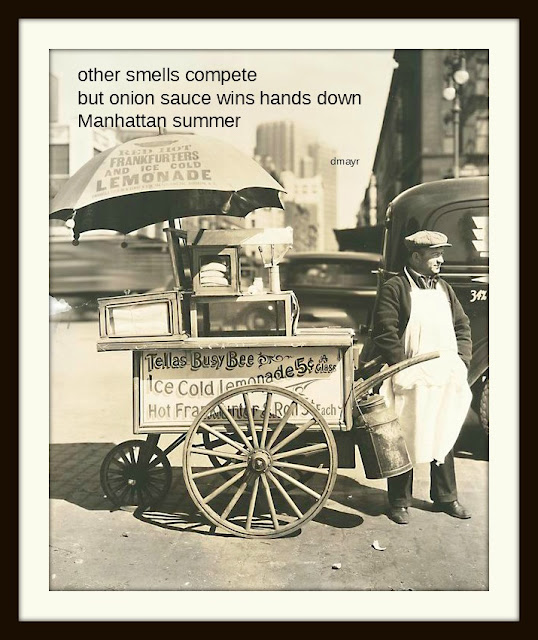 In the early 70s I worked for a year and a half in Manhattan, I commuted from the Bronx by subway to Columbus Circle. On days in the summer, exiting the station, the air was redolent with the smell of onions being prepared for hotdog vendors. One of my favorite gustatory memories is of steamed hotdogs covered in tomato onion sauce. Normally steamed dogs are unappealing to me, but dowse one in the onion sauce and it's to die for (at least in my memory).

Despite your political affiliation, if you're a woman, you have to agree that this has been a historic week for women. A woman from a major party has been nominated to run for President of the United States. It took almost a century from the time women got the right to vote, but we're finally catching up to the rest of the world! Hillary Clinton, you go girl!

With hope for a brighter future and sustained progress for America's girls, I'm sharing this smile-inducing poem by Janet Lewis (1899-1998): 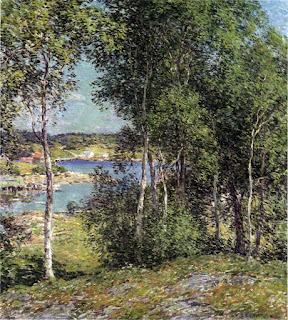 The axe rings in the wood,
And the children come,
Laughing and wet from the river;
And all goes on as it should.
I hear the murmur and hum
Of their morning forever.

The water ripples and slaps
The white boat at the dock;
The fire crackles and snaps.
The little noise of the clock
Goes on and on in my heart,
Of my heart parcel and part.

O happy early stir!
A girl comes out on the porch,
And the door slams after her.
She sees the wind in the birch,
And then the running day
Catches her into its way.

"A Family of Birches" by Willard Leroy Metcalf (1907), courtesy The Athenaeum. 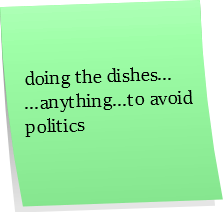 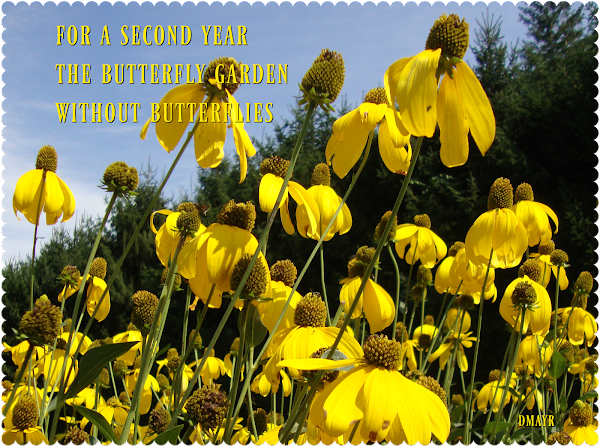 An overt message in a poem will always have me rolling my eyes. Yet, I seem to have written such a poem. My only excuse? One doesn't ignore glitter. And so, feel free to groan or roll your eyes--I won't be offended. 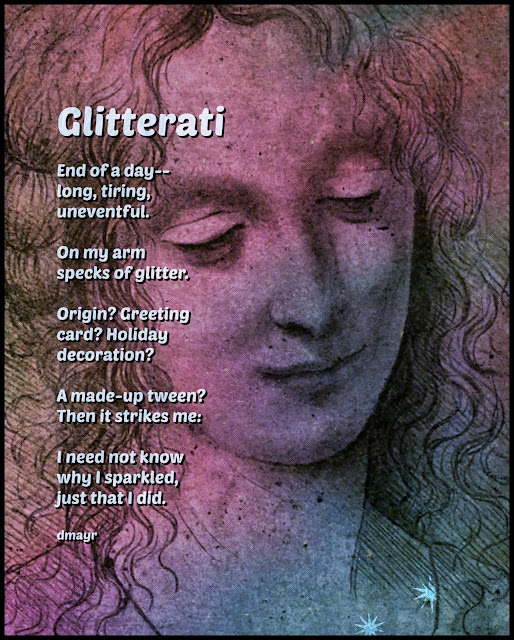 As I said above, one doesn't ignore glitter. When I came home from work one day last week I had silver glitter on me. I had no clue where or when it had attached itself, but it brightened my mood! Then I found a lovely Leonardo da Vinci lady and put her together with some oversized "glitter" and a small poem.

Books4Learning is the place where you'll find this week's Poetry Friday Round-Up. Be sure to stop by! 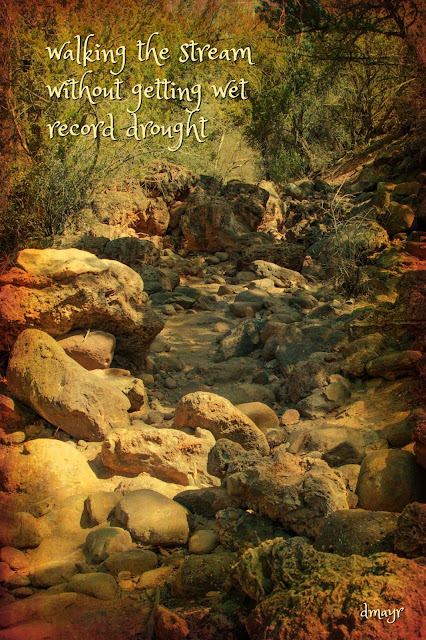 As hinted at last Friday, I have some bunny haiku! There are quite a bit it seems due to the rabbit's role as Easter symbol, but I've left out the holiday ones. 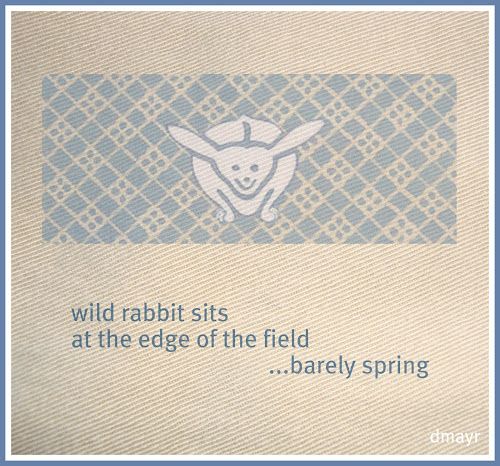 early spring...
a rabbit where the garden
used to be


This one I wrote last year after attending a Red Sox game in Boston. We parked near the Pru and walked to Fenway. On the way I was totally surprised to see baby rabbits! In the middle of the city!

church in the city
behind the iron fence
three rabbit kits


For today, in response to last week's positive reaction to my haibun, I've written another:

My idea of caring for a yard is to allow it to return to nature. Unfortunately, the tired old lawn does need mowing if I'm not to be condemned by the town. Aside from that, though, it's benign neglect all the way. As a result I've got bizarre weeds and bushes that have taken root. My backyard has become a haven of sorts for a variety of suburban creatures. A woodchuck family has maintained a network of tunnels for a number of years. I have chipmunks, squirrels, and rabbits as permanent residents. The occasional skunk or turkey passes through. Something that I hadn't heard before last year was a tree frog. It's back this year to brighten my evenings.

my door opens...
the crisscrossing paths
of two cottontails

The following is an image that contains a rabbit, but no poem. It was submitted as an art inspiration piece for a Spark challenge in 2015. It is titled, "Crepuscular." 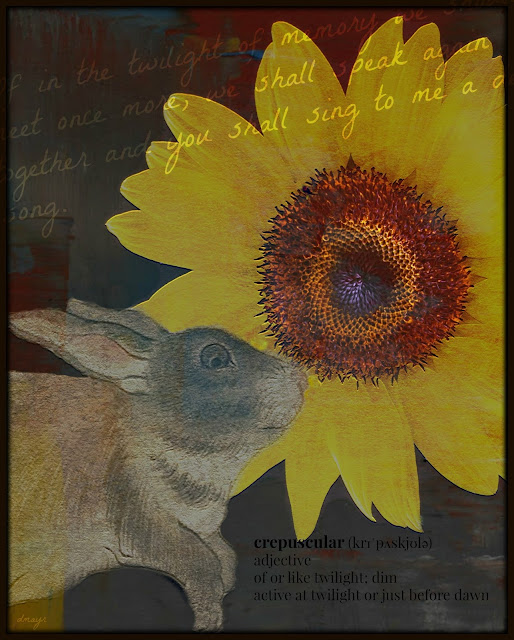 Head over to A Year of Reading where Mary Lee is hosting the Round-Up. 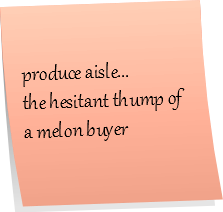 An illustrated poem rather than a haiga. 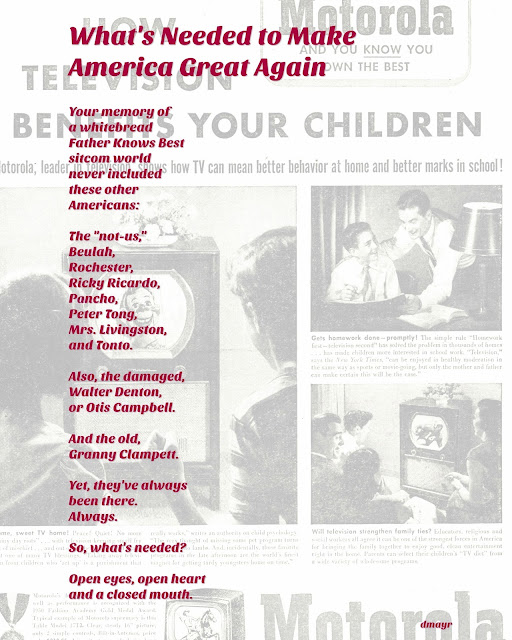 I went back and forth on the "closed mouth." I'd like to think open hearted people wouldn't be afraid to speak out, so, in that case it should be "an open mouth." But, this is for the likes of Mr. Trump. He and his ilk need to open their eyes and keep their mouths closed.
Posted by Diane Mayr at 6:00 AM No comments:

Poetry Friday--Haibun (No, It's Not a Rabbit Haiku!)

I love the way ideas fall into my lap sometimes. On Sunday, I received a Google Alert for "haiku," which provided a link to a post from India titled "You know the haiku? Now meet the haibun, the other Japanese form." I found it is a good introduction to haibun. If the term is new to you, haibun is prose interspersed with haiku. Please take a few minutes to read the post for more information.

I found it fortuitous that the article ended up in my inbox this week because I had no ideas for today's post. Without taking on a Sketchbook project, and, without participating in this year's Summer Poem Swap, I've written/shared almost nothing besides haiku for the past two months.

Over the years, I've written a handful of haibun, but the form never held much interest for me. As a matter of fact, a quick search of Random Noodling posts reveals only one from 2011, which you can read here. However, the article inspired me to revisit haibun and to try my hand again:

My late mother used to say, "The best laid plans of mice and men do oft go awry." The fact that she quoted Robert Burns* so often, was indicative of how things generally went in our lives.

Not much has changed over the years. My plans are almost always more grandiose than what can be fulfilled in the time allotted or with my particular skill set. So, when the library staff finally, after a year, determined to do something in memory of our co-worker, Jena, I was ready with ideas, plans, and schemes. Not all were executable, but, I was determined to show that we put some effort into the long overdue tribute. Our goal? To create a fairy village.

My personal goal was to complete a post office to provide a place for children (and adults) to leave messages for the fairy folk. I completed it, yet it is nearly nothing like the structure I had imagined. If my mother were here today, I would tell her, "Those mice and men plans sometimes turn out okay."

an envelope
left behind in a drawer
...the stamp missing

*The exact line, from "To a Mouse," by Robert Burns is, "The best laid schemes o’ Mice an’ Men/Gang aft agley." You can read the complete poem here.

A few weeks ago, I wrote about the project for a Poetry Friday post that included a fairy poem from Shakespeare. After work on Friday we had plans to add a few more items and try to put some finishing touches on the project. New England weather doesn't care about our best laid plans, and with rain expected, we'll be postponing the work.

As I wrote above, I finished the post office. I collaged animal and flower stamps to the interior because Jena used to collect pretty or unusual stamps to share with her granddaughter. Several of us saved stamps for her over the years. Here's a photo, which shows the front and the stamps on the inside, taken prior to the installation of the roof: 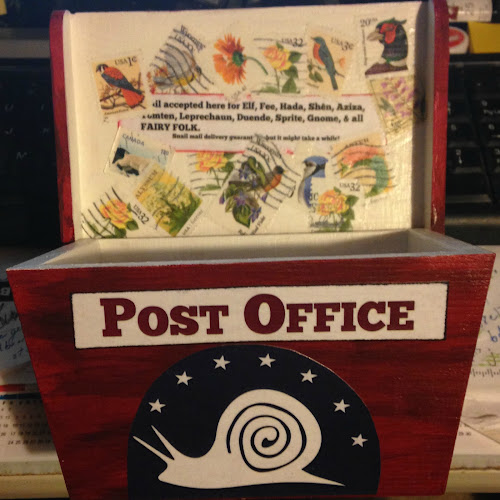 I'm adding a link to a new Facebook page I set up for the library's "Pixie Place." I'll be posting new photos as items are added, so visit the page! And while you're out visiting, also stop by The Logonauts, where Katie is hosting this week's Round-Up. 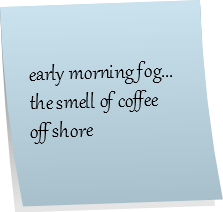 It's a tough time for dogs and cats. Keep yours indoors this holiday! 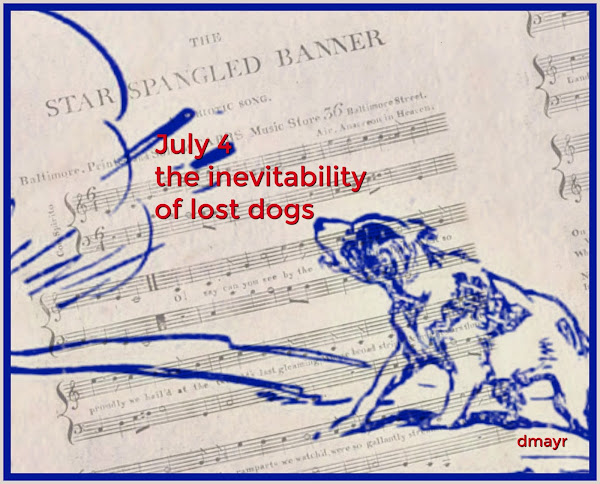 Poetry Friday--It's All About the Frogs!

So far this spring/summer, I've posted two haiga that had to do with frogs, although last Sunday's was indirectly related to frogs. Since my Happy Haiga Day! posts don't get a lot of readers, I'll repost those two, as well as three older frog haiga. 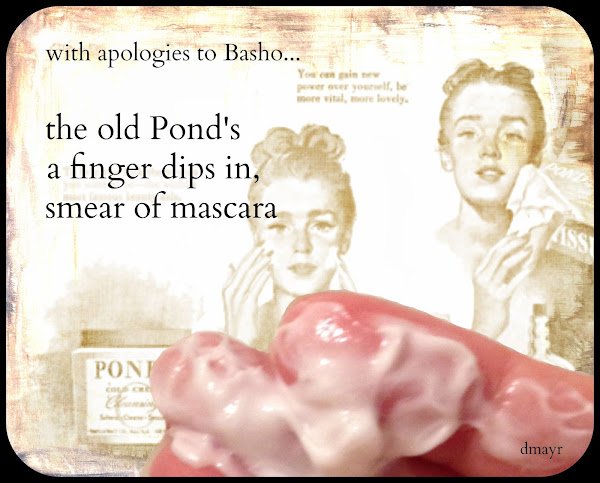 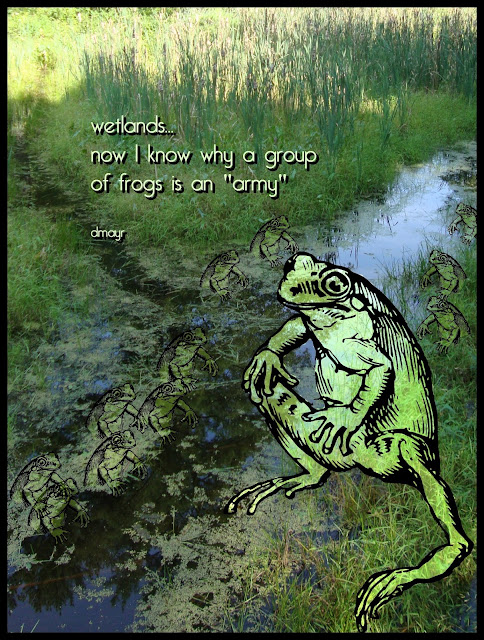 The ones that follow are from prior to August 2013: 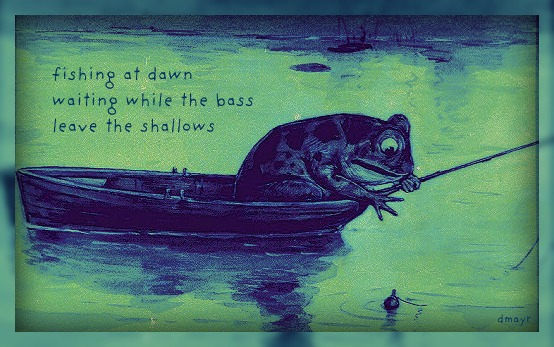 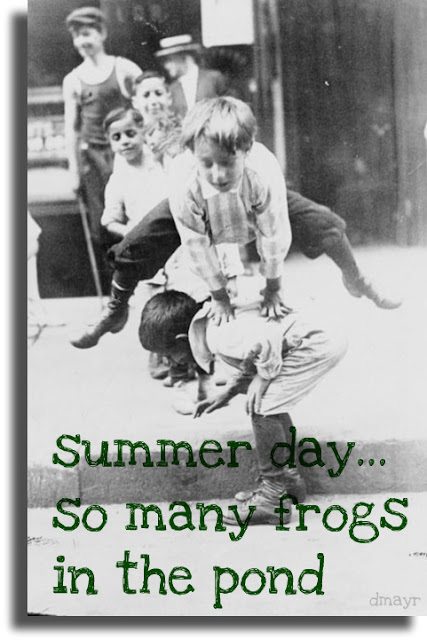 The last one you may have seen before since I quite like it! It is from the time when I used to submit to online journals that took haiga. Oddly enough, it was rejected with an explanation that led me to say, "Really, that's the best you can come up with?" The reason, I was told, is because the font was too big and not acceptable for haiga! Ha!

This first Friday in July you'll find Tabatha rounding up the poetry links at The Opposite of Indifference. Have a safe holiday weekend!