This is wishful thinking. I'm hoping to be finished by December 1 with the large batch of turkey chili made with the Thanksgiving turkey carcass! (Actually, some went into the freezer, so it may be months!) 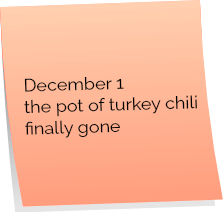 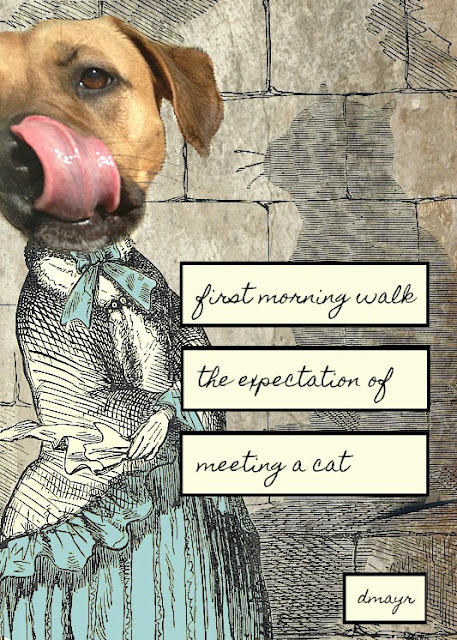 first morning walk
the expectation of
meeting a cat
Posted by Diane Mayr at 6:00 AM 2 comments:

Paula has a point. Americans are gullible consumers. This led me to thinking about how corporations can change Americans' thinking about what is good and what is good-for-you. They wheedle us into thinking that what is good can also be good-for-us. For corporations, it's all about the bottom line. They exist to make money, not to make us healthy. If they make a product cheaply, sell it to a gullible population, and get that population to crave the product so that they buy more, then the corporations' bottom lines increase.

When I was young, not many outside of immigrant communities had ever heard of yogurt--a fermented dairy product. In New York where I grew up, Dannon made simple yogurt products--plain, strawberry, prune (don't turn up your nose, it was my favorite), and that was about it. Then in the 1980s yogurt started to take off. Flavors were added. Its popularity grew. One day, 8 oz. containers turned into 6 oz. containers and were sold for the same price. Then 6 oz. was reduced to 5.3 oz. The flavored yogurts soon came to include choices with chocolate bits, candies, crushed cookies, and other add-ins. A whole new market was added for even smaller, "baby-sized portions" for babies and toddlers made with "organic" ingredients. When the initial yogurt market was saturated, "Greek-style" yogurt came to light. Twice as much in price, but Americans were getting more protein! Any potential protein benefit, though, was negated by upping the sugary add-ins.

As I said, corporations are out to make money. So, here we are, you're privy to yet another rant. I've also ranted in poetry, below, and you can blame it on Paula Poundstone!


The corporate monster,
spying a borderline
healthy food, rejiggers
it with sugars and corn syrup.

Markets it as good-for-you.

The food, in a mere
twinkling, has been turned
into candy--highly addictive.

The granola bar was
festooned with caramel,
spangled with chocolate bits.

Reintroduced as The Energy Bar.

Sugar too, has a new first
name--Organic. Therefore,
it must be good for you!
Cravings need not be denied.

The Bottom Line loves it, too.

The Black Friday edition of the Poetry Friday Round-Up is taking place at Carol's Corner. Be sure to stop by!
Posted by Diane Mayr at 12:00 AM 26 comments: 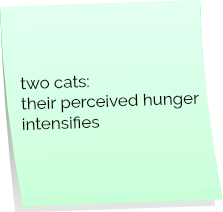 two cats:
their perceived hunger
intensifies
Posted by Diane Mayr at 6:00 AM No comments: 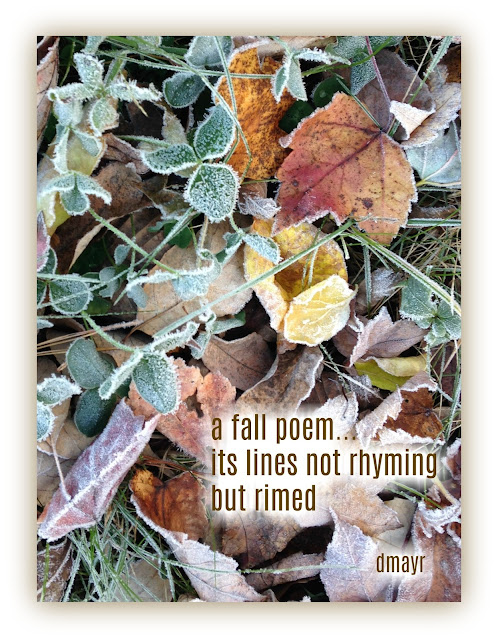 a fall poem...
its lines not rhyming
but rimed
Posted by Diane Mayr at 6:00 AM 2 comments:

In 2010 I did a post on the women of the Mayflower, and then in 2013, I posted an ekphrastic poem inspired by an iconic painting of the "The First Thanksgiving, 1621" by Jean-Leon Gerome Ferris [circa 1915]. I'm going to post the painting and poem again today so that we don't forget the women of history. Of the 30 adult women who traveled on the Mayflower, only four survived the first winter! 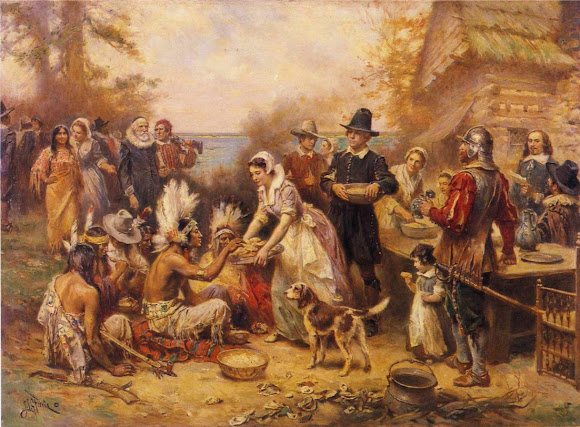 Re: your painting titled
"The First Thanksgiving, 1621"

We, the women of Plymouth
were not glowing with health.
Nor, were we given to smiling.
Yet, you portray us as robust,
clean, and gracious hostesses.

Rather, viscera from all manner
of wild creatures stained our dress.
Our scarred hands were burned,
swollen, cracked and bleeding.
We silently wept with pain, fatigue.

We cooked and served as was
our lot, while the stink of bear-
greased savages filled our noses
making us gag. Our own men, too,
had a noxious stink about them--fear.

Some may have given thanks
that day, but it was not the women.
Therefore, we write to urge you to
take up brush and palette once more.
Do not give us beauty, give us truth.

Signed,
The four who had the misfortune not to
have perished in the year of our Lord, 1621

Visit Jane at Raincity Librarian for this week's Round-Up.

Have a Happy Thanksgiving!
Posted by Diane Mayr at 12:00 AM 17 comments: 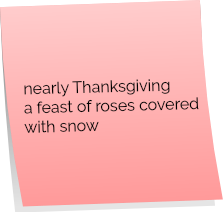 nearly Thanksgiving
a feast of roses covered
with snow
Posted by Diane Mayr at 6:00 AM No comments: 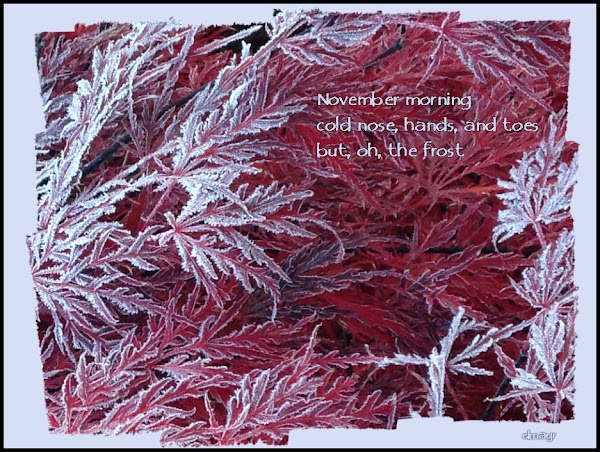 November morning
cold nose, hands, and toes
but, oh, the frost
Posted by Diane Mayr at 6:00 AM 1 comment:

For the month of November, at The Haiku Foundation website, my haiku with illustrations are featured in the THF Haiga Galleries. I want to thank Jim Kacian and The Haiku Foundation for allowing me to share my work with an audience different from my Poetry Friday peeps.

Here's one of the haiga that is a favorite. Why? Because I can imagine a man and his dog, outside after a long winter, meeting up with other fresh-air starved people and dogs. It is a colorful and playful scene that makes me happy! 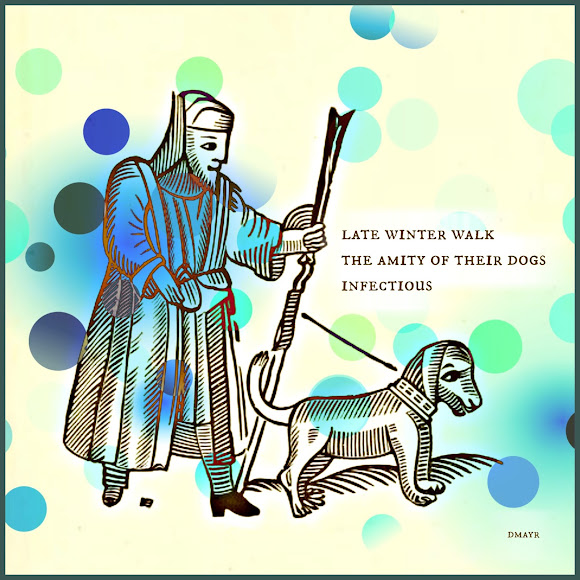 On The Haiku Foundation home page the announcement went:

This is the first public recognition of my work having been done by an "artist," despite the many times I've said it myself in an effort to boost my confidence. Believe me, the outside acknowledgement is sweet.

So, how did I win this honor of being featured? I read the following in the Gallery section, "Would you like us to consider your work for a Haiga Gallery? Contact us for details." I had amassed a fair number of haiga, so I thought I'd email and see what was involved. I was certainly surprised when I got a reply that basically said, "we have an opening in two months." OMG! I was only inquiring! Now what? I would need to submit about 30 haiga. Do I turn down the invitation? Right away, the devil on my shoulder started whispering, "What a fraud, you are. The jig is up!"

It sure seemed that the jig was up, but I wasn't going to miss an opportunity that fell into my lap. I told the shoulder guy to put a sock in it!

I've never assembled a collection. How would I organize it? Was there a specific topic I could build upon? Many, many haiku collections are arranged seasonally, but I didn't want that to be the only theme. Could I do one season--autumn--since the collection would be posted in November? Nope, I didn't have enough.

I spent a lot of time going through my files and trying to find something to pin a theme on. After a while, it was obvious--animals. I had cat haiga, dog haiga, bird haiga, bug haiga, etc.

The THF Haiga Galleries collections aren't titled other than with the poet's name, but for myself I titled the collection, "Feline, Canine, Equine, Swine (and More)."

Since it is The Haiku Foundation's gallery, I eliminated small poems, but I did pick a few related forms like tanka and cherita.

I narrowed it down to about 50 possibilities.

I tried to keep a balance of animals, but of course, cats and dogs had a tendency to dominate. I wasn't always successful with the balance in the gallery. In spots you will notice I have two insect haiga together, two bird ones, two ones on walks, etc.

I tried to arrange them following the passage of a year, that is, January to December. That was a little easier, except for the ones that really didn't have a particular place in the year.

I finally asked two co-workers to pick out their favorites, so I could get an idea of what had general appeal.

It was tough making all the decisions needed! I have a heightened appreciation for anthologists like Lee Bennett Hopkins who deal with such decisions on a daily basis!

Make sure you visit Jama's Alphabet Soup and catch this week's Poetry Friday Round-Up.
Posted by Diane Mayr at 12:00 AM 24 comments: 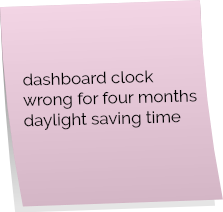 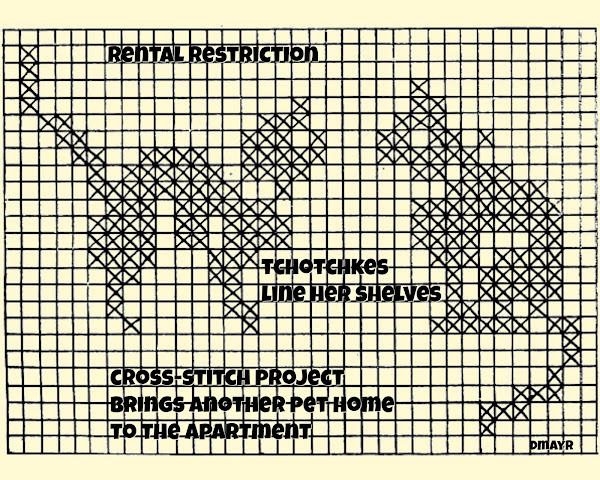 cross-stitch project
brings another pet home
to the apartment
Posted by Diane Mayr at 6:00 AM No comments:

In a flash, October has come and gone. Before we move on into November, I wanted to share the postcards I sent to four people in Amy Souza's October Spark postcard challenge. (To learn more about Spark, click here.)

We were free to create an art postcard of our choosing. No topics were assigned, but, I like to work around a theme. I think I'd have to say that the results are all about ORANGE, although they began as an exploration of the topic of "pumpkins." 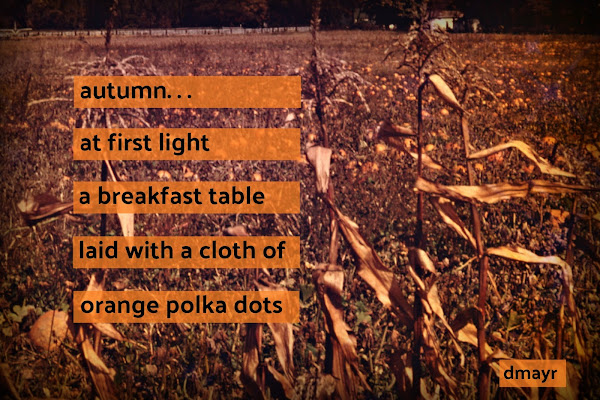 autumn...
at first light
a breakfast table
laid with a cloth of
orange polka dots 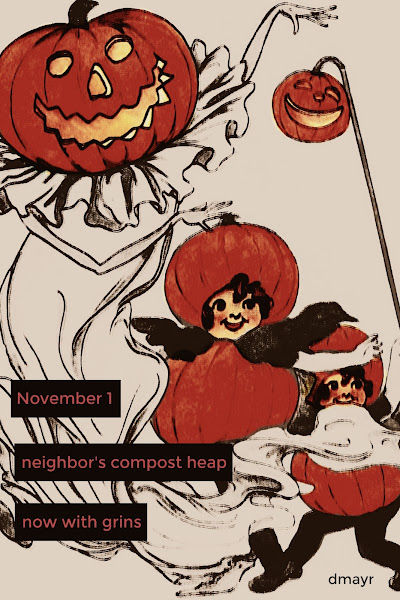 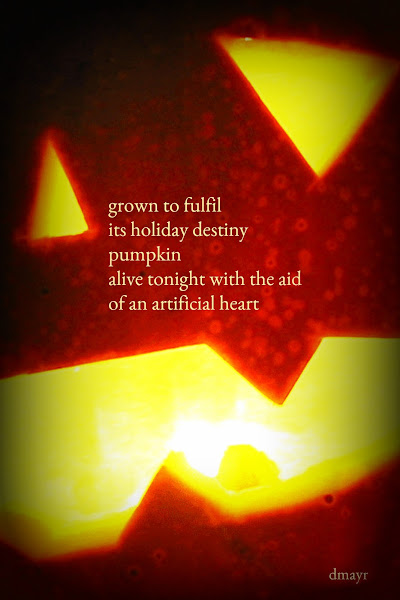 This next haiku was inspired by a favorite old picture book, Mousekin's Golden House, by Edna Miller: 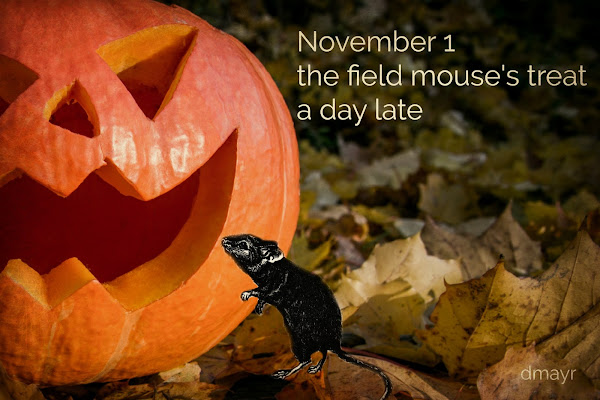 I hope I haven't hurt anyone's eyes or sensibilities with all the orange! I can guarantee I will never use orange in quantities such as this ever again!

Head over to Teacher Dance where Linda is hosting the Round-Up this week. Linda had posted a photo on Facebook last week of a squirrel nibbling on a jack-o-lantern. Old pumpkins can provide a treat for many little creatures.