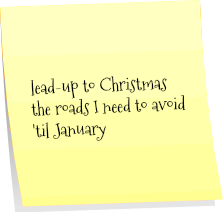 lead-up to Christmas
the roads I need to avoid
'til January
Posted by Diane Mayr at 6:00 AM No comments:

Trying to work my way through the election--still... A poem for today (possibly more hopeful than I feel). 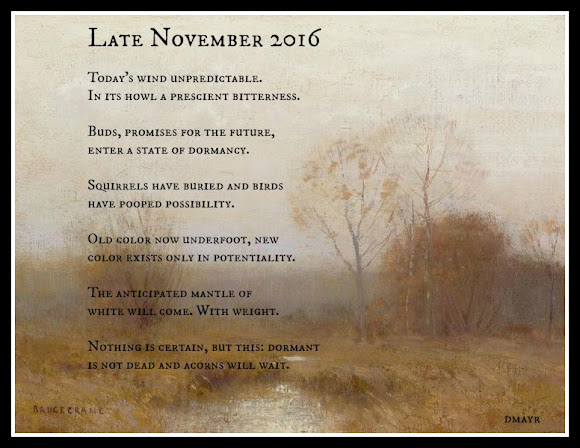 Today's wind unpredictable.
In its howl a prescient bitterness.

Buds, promises for the future,
enter a state of dormancy.

Squirrels have buried and birds
have pooped possibility.

The anticipated mantle of
white will come. With weight.

Nothing is certain, but this: dormant
is not dead and acorns will wait.

Last Friday, Michelle Barnes announced the publication of her The Best of Today's Little Ditty anthology. Think Christmas, or any holiday or gift-giving occasion--it would make a great stocking stuffer!

Also with her announcement, Michelle held a "Five for Friday" ditty writing exercise. We were instructed to write a five word poem (plus title) about "the best thing that happened to you this week."

Being that the assignment came so soon after the election, it took a bit of thought to come up with something that I considered a "best thing." (I'd been stewing in doom and gloom.) 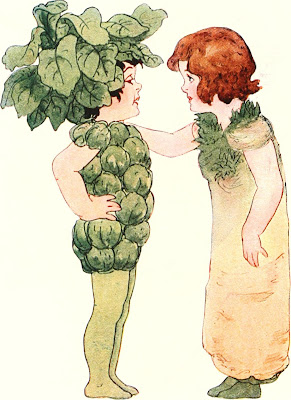 Illustration from Mother Earth's Children: The Frolics of the Fruits and Vegetables by Elizabeth Gordon [1914].
After a little thought, I came up with Brussels sprouts. I figured people would think I'm weird, so I did a bit more pondering and remembered my doctor visit where I found I hadn't gained any weight. That was pretty good until I also remembered I hadn't lost any weight either. Still, I thought it was a reasonable thing to write about, and so I did. (Read my twin ditties here.)

You may be thinking, "But what about the Brussels sprouts?" The best thing that happened to me early last week was that I roasted a pan of Brussels sprouts. I had marinated them in olive oil vinaigrette and roasted them at 375 degrees until nicely browned. They were delicious. I thought about them for days after.

I grew up never having been exposed to Brussels sprouts, and when, as a young adult, I was served them, they had been boiled. They were, quite frankly, awful. About eight years ago, a co-worker told me that Brussels sprouts were tasty roasted and I should try them again. I did, and I've been a Brussels sprouts fan ever since. Here's my five word ditty on the subject:

I checked through my files and found that I've written about Brussels sprouts before!

The tanka came about as a result of my first success with roasting sprouts. I never did make roast beef. Spending big bucks on a roast beef and then risking overcooking it didn't appeal to me. I no longer have an appetite for roast beef, so I will probably finish my life without ever making one!

Quite a few, as it turns out! There seems to be a Brussels sprouts affinity among Poetry Friday participants! 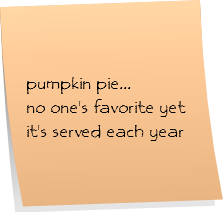 Thanks to my friend, Janet, now a resident of Ireland, for the photo! 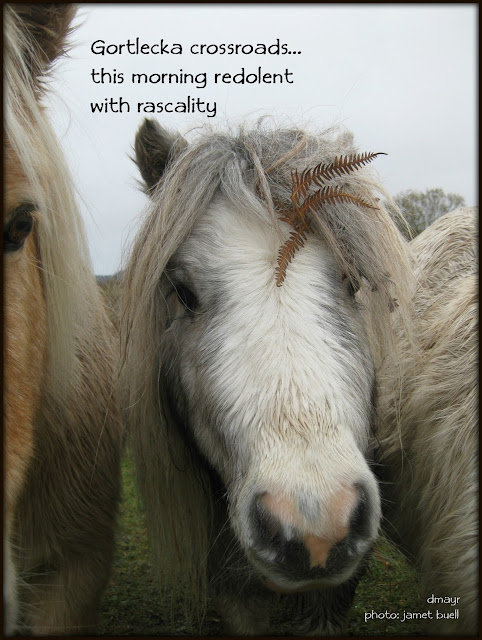 A few days before November 8, I was full of hope about the presidential election. I was also almost giddy at the idea of finally devoting my time to reading something other than political articles. Then November 9 came and I quickly came to realize that I am obligated to continue with my reading. It's depressing and so exhausting. I'm tempted to leave everything behind, since, the effects of the next four years may not be undone in my lifetime. But, where to go? 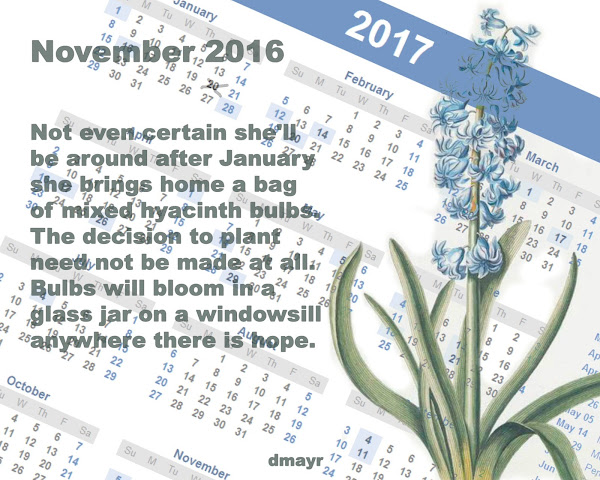 Brenda at Friendly Fairy Tales is waiting for you to stop by for the Round-Up! She also made me aware that screen readers for the visually impaired cannot "read" the text within a jpg, so, I will have to remember from here on in to also include the text.

Not even certain she'll
be around after January
she brings home a bag
of mixed hyacinth bulbs.
The decision to plant
need not be made at all.
Bulbs will bloom in a
glass jar on a windowsill
anywhere there is hope.

And, if you're looking for something to do with the kids this weekend, Run, Turkey, Run!: The Musical is being performed at 10 AM Saturday and Sunday at the Seacoast Repertory Theatre in Portsmouth, NH.
Posted by Diane Mayr at 12:00 AM 25 comments:

Email ThisBlogThis!Share to TwitterShare to FacebookShare to Pinterest
Labels: haiga, hyacinths and other flowers, original poem 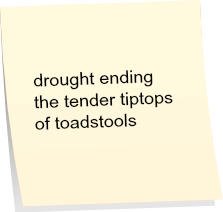 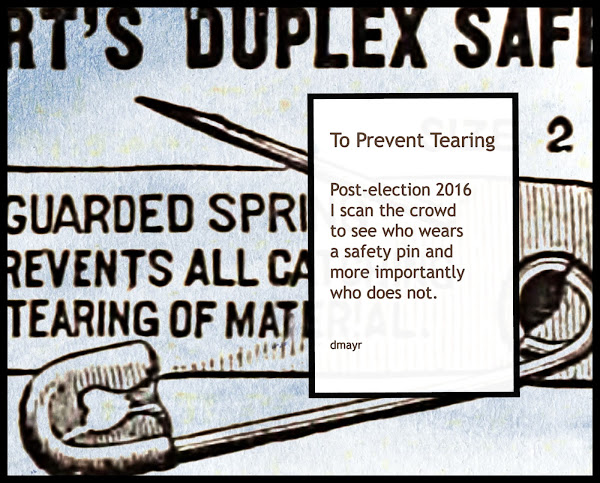 If you haven't been on social media in the last few days, you may have missed the safety pin movement. It seems that a large number of incidents have occurred since November 9 that leave many feeling fearful, so, if you are ever in a situation where you fear for your safety or someone is making you uncomfortable, look around for a person wearing a safety pin. By wearing a safety pin that person has agreed to stand by you or anyone else in need of a friend.

In looking for an image of a safety pin, I also found the ad below. I decided not to use it with the poem because I think it's interesting to read in its entirety. I find it strangely ironic. 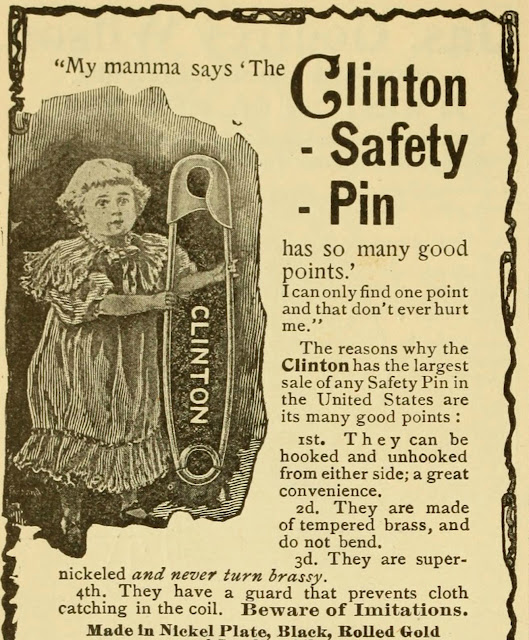 Last Friday, Tara Smith, at A Teaching Life, shared an autumn poem, "Toward the Solstice" by Mark Perlberg. The poet wrote:

We raked the leaves into shifting piles on the lawn,
scooped them into deep round baskets
and spilled them in the street against the curb.

When I read these lines I remembered the bushel baskets that were standard in everyone's garage in the 1950s. Some may have known them as peach baskets, but they were used for carrying apples, corn, and all sorts of other things. Where I grew up on Long Island, NY, they were used for clams or crabs. And, of course, for moving raked leaves to the burn pile.

"scooped them into deep round baskets" What a forgotten memory the line brought back to me. No black plastic in those days. I can only imagine the poets of today writing about leaves in garbage bags:

scooped them into heavy-duty trash bags
lined them up against the curb
like a wall on the Mexican border
discouraging kids from taking that leap...

Of course, when I wrote the comment last week, the election was still foremost in my mind, but, I also got to thinking about other ways to describe ugly black plastic bags full of leaves and thus embarked on a fun afternoon of similes.


scooped them into heavy-duty trash bags,
knotted their convenient red drawstrings
so they looked like a row of be-ribboned
black cats on a vintage Halloween postcard

The first one is obvious. Does anyone know about the second one? Babci (pronounced Bop-chee) is grandmother in Polish. Kiszka (pronounced keesh-ka) is a Polish blood sausage (something I never would touch, but that my father loved--I shudder to remember the look and smell of it).

Here's a postcard to illustrate the third (but has only one be-ribboned cat): 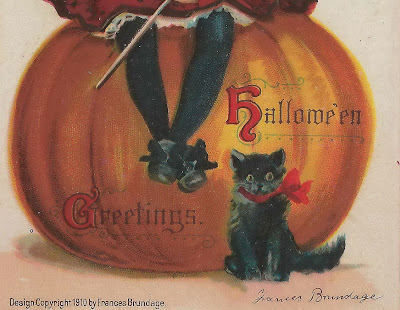 After four similes, I ran out of ideas. Metaphors didn't seem right at all for plastic trash bags. That's an exercise for another time and another topic. Neither similes nor metaphors appear in my poems, for the most part, I'm a haiku person after all. In haiku a trash bag is a trash bag. Period.

trashbags at the curb
the annual blister
on my palm

Jama is the Poetry Friday Round-Up host this week, so I'll meet you at Jama's Alphabet Soup.
Posted by Diane Mayr at 9:00 PM 30 comments:

No haiku for today! How about a poetic note? 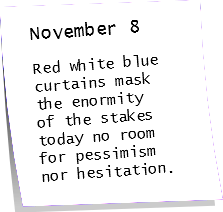 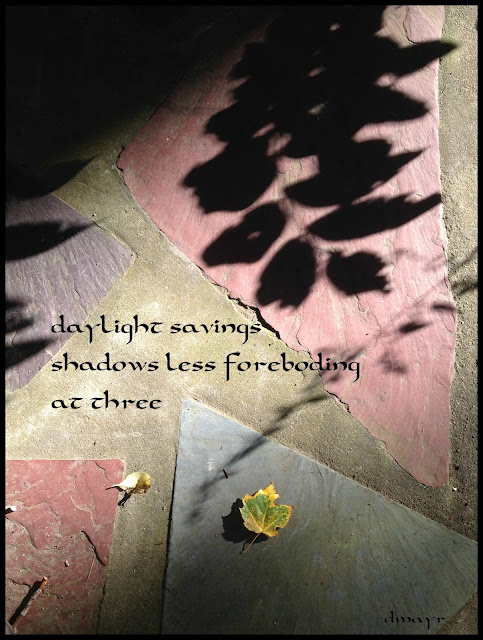 Amy Souza, the originator of the Spark: art from writing: writing from art exchange, also holds a postcard exchange between the Spark challenges.

October was my third time participating. For my postcard, I illustrate a haiku or small poem that I write for each person in my group of exchangees. There were only three people in my group this time so I only needed to create 3 art postcards. In April I used a bird theme, in July I used "endless summer heat." This time I made it even easier on myself by making my theme simply October. 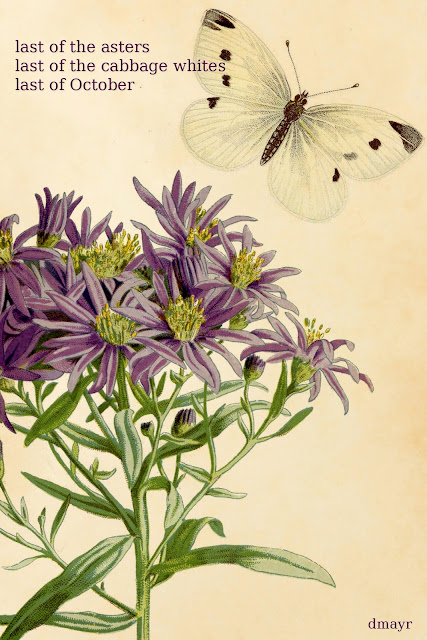 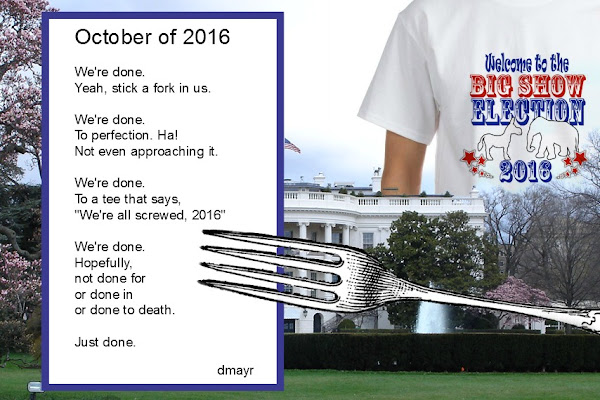 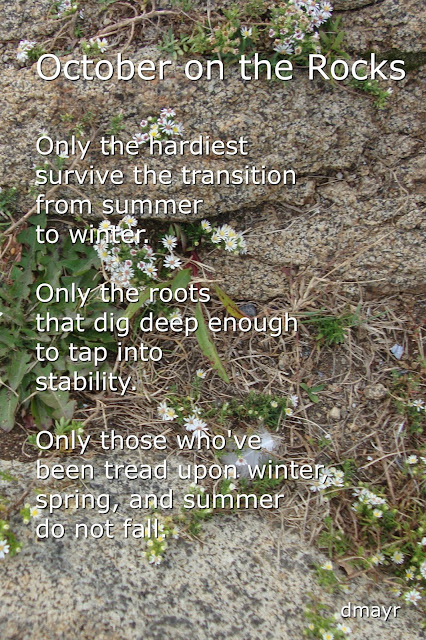 Head over to Writing the World for Kids where Laura is hosting the Poetry Friday Round-Up.

© Diane Mayr, all rights reserved. The tee-shirt in the middle image is found at CafePress.
Posted by Diane Mayr at 12:00 AM 29 comments:

Email ThisBlogThis!Share to TwitterShare to FacebookShare to Pinterest
Labels: haiga, haiku, hyacinths and other flowers, Spark 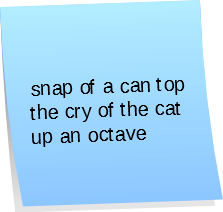