The Ripple site is now closed and more than $11,000 has been raised to address the destruction of Gulf coast wildlife as a result of BP oil spill. Many thanks to one committed artist, Kelly Light, who took an idea and ran with it. Brava!

I hope what we've done leaves behind the inspiration and the belief--That anyone can do something to help--no matter how small--when faced with what seems like an insurmountable problem. It just takes one voice--one person to create a space for hope and action...

Brava, Kelly, you are an inspiration to us all!
Posted by Diane Mayr at 2:10 PM No comments: 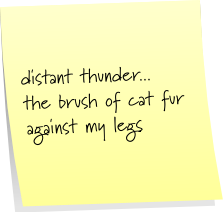 © Diane Mayr, all rights reserved
Posted by Diane Mayr at 5:01 AM 1 comment:

In the olden days, teachers used to collect toilet paper tubes to use in crafts projects. Germophobia and mysophobia have put an end to the use of t.p. rolls in schools, but, artists have found a use for these simple thin cardboard tubes as canvases.

I thought I'd share the work of one t.p. roll artist--and the use of the term "artist" rather than "crafter," is certainly not misapplied--Anastassia Elias. Check out more of her "rouleaux" creations here. 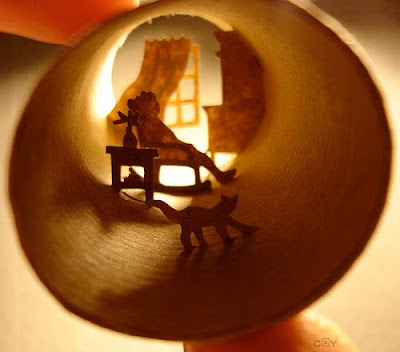 Photo by Chadou Yama
Posted by Diane Mayr at 6:38 AM 2 comments: 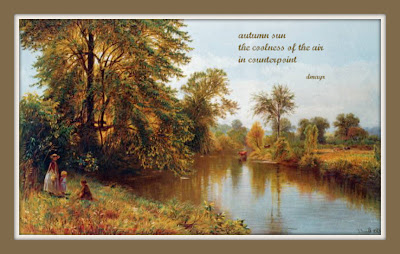 © Diane Mayr, all rights reserved. Currier & Ives print courtesy Library of Congress.
Posted by Diane Mayr at 7:16 AM No comments:

For many years I've written little poems about people (mostly unknowns), places, and events in history. I've decided to call them "poehistry" (not a term that originated with me). I use old photographs for inspiration (see a post I did at The Write Sisters) two years ago on the subject).

Now that I've become comfortable with a few photo editing techniques, I've started melding the photos with the poems. Since I don't know if the term haiga fits, I'll simply call them "illustrated poehistry." Here's one: 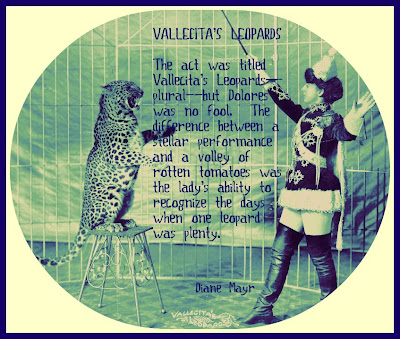 Check in at Karen Edmisten: The Blog with the Shockingly Clever Title for another fabulous Poetry Friday!
Posted by Diane Mayr at 12:01 AM 3 comments:

Yet Another September Announcement! 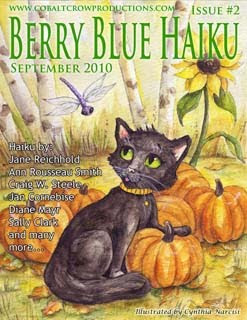 The new issue of the children's haiku magazine, Berry Blue Haiku, is now available. I'm happy to say I have two haiku in this issue! For more information, click here.
Posted by Diane Mayr at 10:27 PM 4 comments:

Not a haiku, but rather a tanka for today: 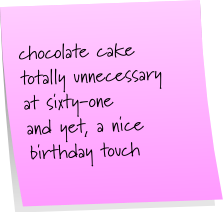 © Diane Mayr, all rights reserved
Posted by Diane Mayr at 6:07 AM No comments:

Haiku from the Runway

This is Fashion Week in London, and a writer for London Fashion Week Daily, Brix Smith-Start, is reporting from the front row. Here's the twist--she does it through haiku, and calls it "Haiku-ture."

Surprisingly, Smith-Start's poems are not written in the typical 5-7-5 format. That's good. But, Smith-Start begins every line with a capital, and the poems end with a period. That's not so good. That's as far as I'll go on the critique. Simply enjoy this sample from day 2, it is quite amusing:

They float and scratch and stamp,
And fringing turns to
Self flagellation.

The poems from day 1 are not nearly as successful as haiku, but I'll let you be the judge.

So, would you like a challenge? Come up with your own haiku/senryu for this fashion statement from long ago: 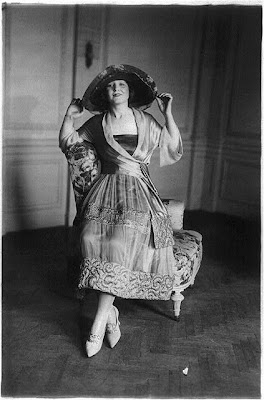 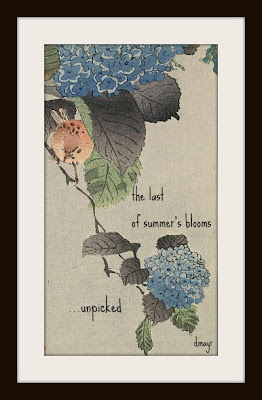 © Diane Mayr, all rights reserved. Image courtesy Library of Congress.
Posted by Diane Mayr at 12:37 AM No comments:

Earlier this week Catzilla!: Tanka, Kyoka, and Gogyoka About Cats edited by M. Kei, was released.

I have two Catzillas in my house, so when a call came for tanka (short poems of 5 lines) about cats, I jumped at the opportunity to send in a few of my poems, most of which were inspired by my own two beasts. I was lucky enough to have two accepted, and they appear in the new anthology along with poems by 40+ other cat people.

I'm sorry, but if you want to read my two tanka, you'll just have to buy the book! To make up for my little bit of meanness, I'll let you read one that was rejected:

spring morning...
cat at the window
claws her way
up the screen to put
the birds in their place
© Diane Mayr, all rights reserved

The cat on the cover of Catzilla! is Timmynocky, a sea cat aboard the Kalmar Nyckel, whose adventures have been chronicled here.

Visit Elaine at Wild Rose Reader and enjoy this week's Poetry Friday Round-Up.
Posted by Diane Mayr at 12:01 AM 4 comments:

Email ThisBlogThis!Share to TwitterShare to FacebookShare to Pinterest
Labels: tanka 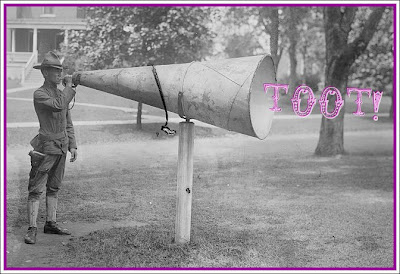 Announcing the latest edition of Sketchbook: A Journal for Eastern and Western Short Forms! I have several haiga in this edition! Check it out!

September has been a great month for me, publication-wise, and it ain't over yet!
Posted by Diane Mayr at 6:14 PM No comments: 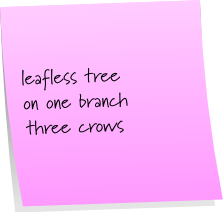 © Diane Mayr, all rights reserved
Posted by Diane Mayr at 6:18 AM 2 comments: 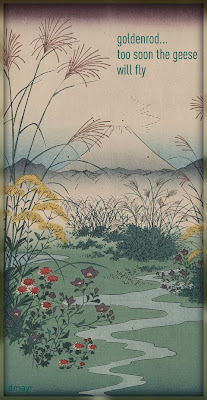 © Diane Mayr, all rights reserved. Image by Hiroshige courtesy Library of Congress.
Posted by Diane Mayr at 6:42 AM 4 comments: 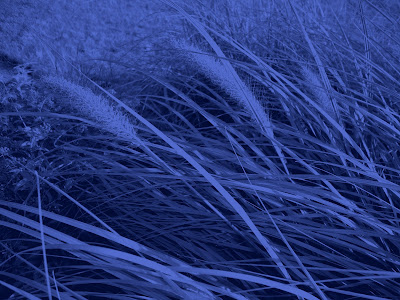 Already it is upon me, the melancholia of September. We're barely passed Labor Day! Oh, well. To fit with my mood, here is "September Midnight" by Sara Teasdale:

Lyric night of the lingering Indian Summer,
Shadowy fields that are scentless but full of singing,
Never a bird, but the passionless chant of insects,
Ceaseless, insistent.

The grasshopper’s horn, and far-off, high in the maples,
The wheel of a locust leisurely grinding the silence
Under a moon waning and worn, broken,
Tired with summer.

Let me remember you, voices of little insects,
Weeds in the moonlight, fields that are tangled with asters,
Let me remember, soon will the winter be on us,
Snow-hushed and heavy.

Over my soul murmur your mute benediction,
While I gaze, O fields that rest after harvest,
As those who part look long in the eyes they lean to,
Lest they forget them.

This Friday's Poetry Round-Up can be found at Picture Book of the Day. Stop by for some fabulous links!
Posted by Diane Mayr at 12:01 AM 3 comments: 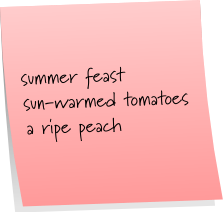 © Diane Mayr, all rights reserved
Posted by Diane Mayr at 6:54 AM 2 comments: 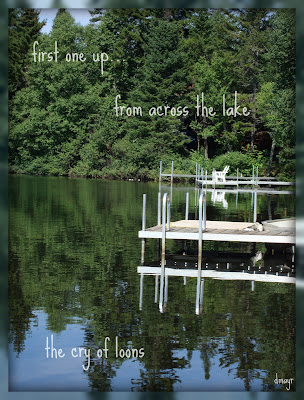 © Diane Mayr, all rights reserved
Posted by Diane Mayr at 6:06 AM 2 comments: 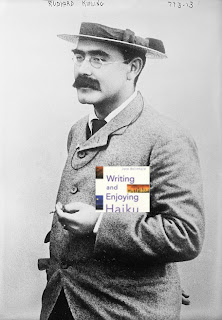 No, of course, he didn't, but there is yet another crazy internet site, Hiddenhaiku.com, which creates fake haiku--this one takes sentences from the works of famous writers, like Kipling, and divides them into three lines of 5-7-5 syllables. Here's an example of a Dickens "haiku" from A Christmas Carol:

It was clothed in one
simple green robe, or mantle,
bordered with white fur.

And another from Lewis Carroll (can you guess the source?):

It's the stupidest
tea-party I ever was
at in all my life!

And a third from Treasure Island by Robert Louis Stevenson:

And then, all of a
sudden, a shrill voice broke forth
out of the darkness

Always one to look on the bright side of things, even things that annoy the hell out of me, I decided to make some use of these fake haiku. For instance, the one from Dickens, I used as a prompt that resulted in:

october snow--
the white cat not white
for long

And Stevenson's I re-imagined as:

the dream ends
with a shrieking jay
...summer dawn

Hey, they ain't great, but I think it's safe to say they're closer to haiku than the originals!

And by the way, the book I tucked under Kipling's arm is Jane Reichhold's Writing and Enjoying Haiku: A Hands-On Guide (Kodansha, 2003).
Posted by Diane Mayr at 12:02 AM 4 comments:

Today's a banner day for me!

When I found out that I had won the Mayor of Nagasaki City Award (haiku in English on the topic "atomic bomb"), I announced it in a post and promised I would let you know when it was published in World Haiku Review. It is now online and you can read it here. Please enjoy the rest of the Review, too!

And, that's not all! The latest issue of The Heron's Nest is out and I have a haiku there, too! Click here.

But, wait--there's more--I have a haiku and TWO haiga in the September issue of Notes from the Gean!

Wow, a plethora of good news! So, if you hear me tooting my horn, please forgive me--I'm tickled fuchsia (that's BEYOND pink!)
Posted by Diane Mayr at 4:59 PM No comments: