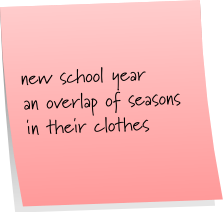 © Diane Mayr, all rights reserved.
Posted by Diane Mayr at 5:31 AM No comments: 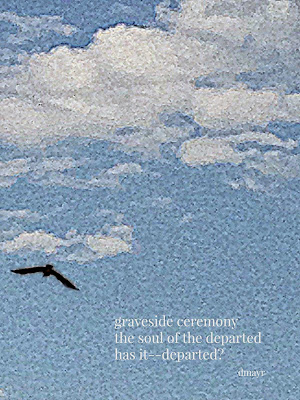 Click on the image to enlarge for easier reading. © Diane Mayr, all rights reserved.
Posted by Diane Mayr at 5:44 AM 4 comments: 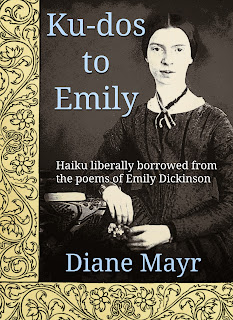 This cover has changed about a dozen times, and it'll probably change again before I decide which version I like the best!

Now that I've basically completed the Sketchbook Project poems, I'm getting back to another of my projects, Ku-dos to Emily. Read more about it here.

This project is slow going because I have to put together an illustration to go with either the original poem, or the response haiku, or both. It's not easy! So, there's only one pairing for today. (I'm taking a few days of R & R--maybe I'll be able to cobble together a few more for next time.) 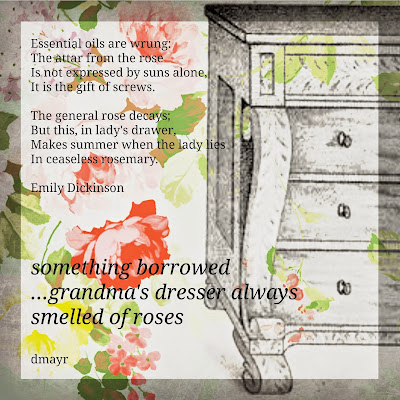 Click on the image to enlarge for easier reading. Poem by Emily Dickinson, haiku and haiga © Diane Mayr, all rights reserved.

[A little aside: I'm reading Close Your Eyes, Hold Hands by Chris Bohjalian, which I'm enjoying. (The premise, however, is deeply disturbing, a nuclear meltdown at a power plant in Vermont!) The main character, Emily Shepard, is a big Emily Dickinson fan. At one point, she tells the reader that many Dickinson poems can be sung to the tune of "Gilligan's Island."

Do you know how hard it is going to be to read the poems now, without trying to sing them? Damn you Chris Bohjalian!]

Laura Salas is the Round-Up hostess this week at Writing the World For Kids.
Posted by Diane Mayr at 9:30 PM 18 comments:

I have no idea what business the crow had being up at barely the crack of dawn, but there was obviously something of interest to him/her! 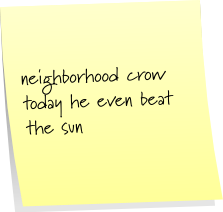 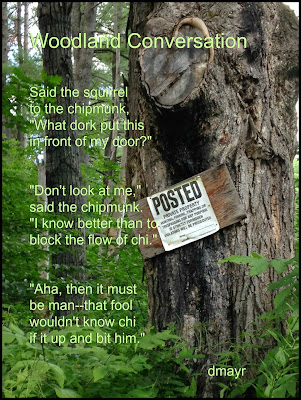 © Diane Mayr, all rights reserved.
Posted by Diane Mayr at 6:00 AM 8 comments:

This may be the last poem in my Sketchbook Project series. I hope I have captured the voices of those children who, in the first two decades of the 20th century, were forced by circumstance to work at an age when they should have been playing or attending school.

We take too much for granted nowadays, including child labor and workplace safety laws. Not to get political, but, there are some people who think the government should be limited in its oversight of business and labor. If a country without governmental regulation were to evolve, how long do you think it would take before children were back at work in the factories, fields, tenements, or on the street? (In case anyone has forgotten, in the debates leading up to the 2012 presidential election, there was one candidate who thought children should/could replace janitors in schools.) 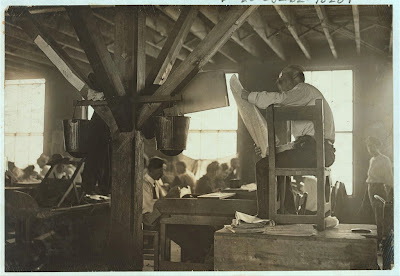 Caption: A "Reader" in cigar factory, Tampa, Fla. He reads books and newspapers at top of his voice all day long. This is all the education many of these workers receive. He is paid by them and they select what he shall read. Location: Tampa, Florida. Date: January 1909. Photo by Lewis Wickes Hine, courtesy Library of Congress.

We have a man
here who reads
to us all day long.

train wrecks, jail
breaks, disease...
It's almost like being

out in the real world
except sometimes
here we get poetry.

I have been using my imagination to fill in the stories untold by Hine's photographs, there's a man in Massachusetts who has been piecing together the stories in another way. Click here for a short video.

The Poem Farm is where you should head for this week's Round-Up. 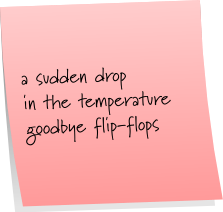 See Tuesday's note for background on this insect. 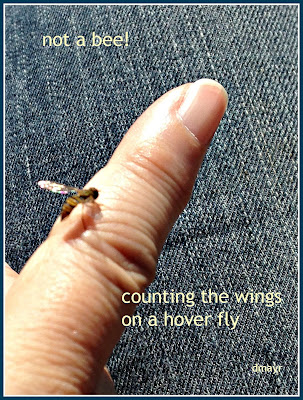 I'm back today with another Sketchbook Project poem. This makes thirteen. The sketchbook is 32 pages. I see page 1 as the title page, pages 2-3 as information about the National Child Labor Committee Collection at the Library of Congress, and Hine's work as photographer, then 14 photo/poem spreads, with a final page of information about the result of the NCLC's investigation.

I have one more poem to go. I think the hardest part of the project will be writing the factual material and assembling the book. I have to determine the order, and maintain a balance of girl-boy voices. A significant portion will be mill worker poems, and the rest will be a mix of other child laborers--newsies, pickers/packers, home workers, etc. If everything doesn't flow, then I may have to write a few more to substitute. 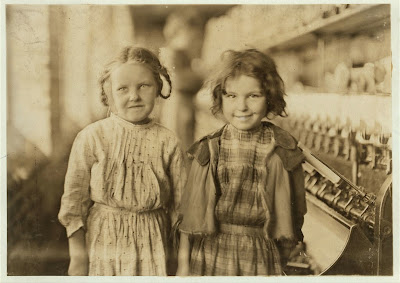 Sister told me, "Cherish that friend."
When I asked her what that meant,
she said, "Keep smiling for Eddie."
We must laugh together. Sing while
we work. At break, whisper silly

words and secrets. And, I'm 'sposed
to listen when Eddie whispers in my ear.
Most of all, Sister told me to remember
the feelin' of her hand in mine--the
tangle of our sticky little-girl fingers.

"The Lord don't promise us nothing
here on earth but heartache and pain!"
she hollered at me. Hollered loud!
I was put in mind then--Sister
once had a friend, too, jus' like me.

Last year Sister stopped talking
bout her mill friend, Carrie, and I
figured she didn't like that girl
no more, but I think maybe she
'jus didn't hold on tight enough.

Interestingly, the little girl on the right was Eddie Lou Young, the name of the one on the left is unknown. You can read all about the search for Eddie Lou's mother's identity, here. I gave the voice of today's poem to the unknown child.

Renee at No Water River is awaiting your arrival for this week's Poetry Friday festivities.

On Sunday, while watching an outdoor performance, we were plagued by a bunch of little bee-like flying insects. Come to find out (after a little online research) that these are hover flies (Sphaerophoria philanthus). At one point, I had them on four fingers of one hand. In the brilliant sunlight, their wings sparkled. I'm making this haiku into a haiga for next Sunday, so come back to see a real hover fly! 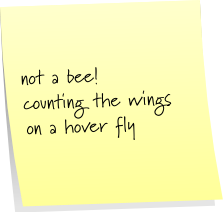 © Diane Mayr, all rights reserved.
Posted by Diane Mayr at 5:55 AM No comments: 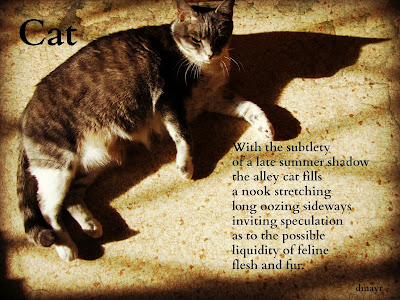 Click on the image to enlarge. © Diane Mayr, all rights reserved.
Posted by Diane Mayr at 6:00 AM 4 comments: 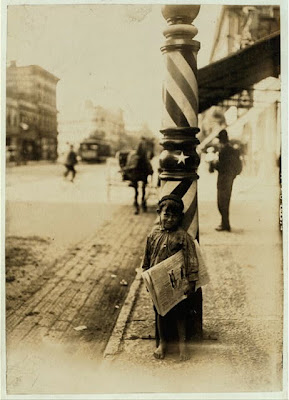 When I get bigger I'm
going to be a barber.
A barber makes people
look good, smell good,
and willing to part with
two pennies for a paper.
And another one for me.

Laura at Author Amok is doing Poetry Friday Round-Up duty this week--stop by! 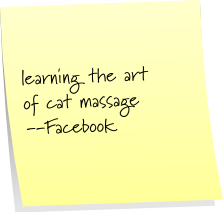