This is my third year participating in a nengajyou, a Japanese style New Year's card exchange. I wrote about my first two experiences here and here. This year I sent cards to multiple recipients in 12 states, D.C., India, Romania, United Kingdom, Ireland, Trinidad & Tobago, and Canada!

The past two years I have used photos of my cat and my son's rabbit* to illustrate the card. The animals were in keeping with the symbols of the zodiac, in Japanese known as Juni Shi: 2010 was the year of the Tiger, 2011 was the year of the Rabbit. As 2012 will be the year of the Dragon, it wasn't possible to find a dragon around the house! I went to the Library of Congress for my illustration, a star map created in 1825, which shows the Dragon constellation, Draco, and Ursa Minor.

The haiku uses a kigo, that is, a seasonal word that provides an imagistic shortcut to the reader. A haiku poet uses a kigo as a way of saving words, which is important in a poem that is typically about 11 or 12 syllables long. [For those wishing to learn more about kigo, please visit the World Kigo Database. It is not easy to navigate if you're looking for something specific, it is better to browse.]

"First" indicates the New Year, as in "first dawn" or "first bath." "First wish" serves not only as the first wish (on a star) of the year, but also as a wish for the entire year ahead. I probably could have left out the word "winter," but, it is an indication that for us in the northern hemisphere that New Year's comes in the winter. This would have been important if any of my cards were sent, say, to Australia or South Africa.

2013 will be the year of the Snake. I found a delightful old photo on the Library of Congress site, so come back next year at this time. For now, you should head on over to The Drift Record, where Julie will round out 2011's great poetry offerings!

Here's wishing everyone a year of health and happiness--and the world a year of justice and peace. Akemashite Omedetou Gozaimasu (Happy New Year)! 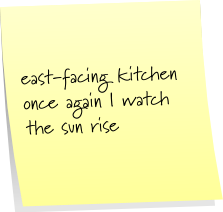 © Diane Mayr, all rights reserved.
Posted by Diane Mayr at 7:50 AM No comments: 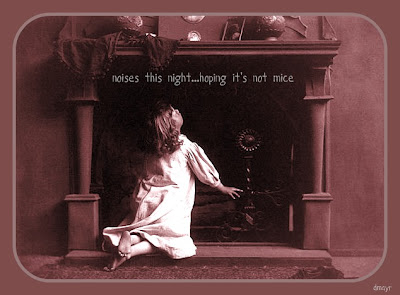 © Diane Mayr, all rights reserved. Photo courtesy Library of Congress.
Posted by Diane Mayr at 12:05 AM No comments:

Poetry Friday--It's In the Air! 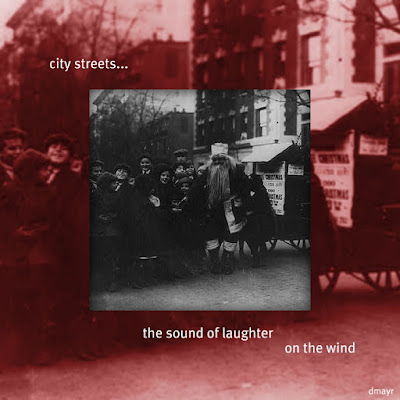 The Library of Congress has been like Santa Claus to me with a goody bag overflowing with copyright-free photos. I have another holiday haiga using a Library of Congress photo, which I posted last year, click here to see it. There will be yet another one on Sunday, so come back again.

Head over to Dori Reads for the holiday Poetry Round-Up, then settle in for a wonderful holiday weekend! Peace to all.
Posted by Diane Mayr at 12:01 AM 6 comments: 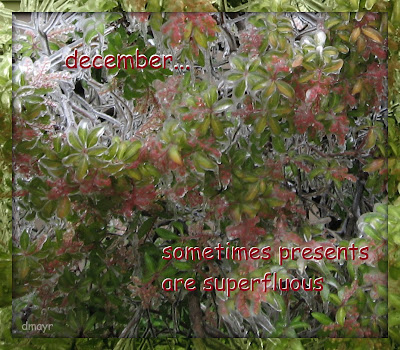 © Diane Mayr, all rights reserved.
Posted by Diane Mayr at 7:01 AM 5 comments:

There is absolutely no other response to the following except a big smile!

The Cure
by Ginger Andrews

Lying around all day
with some strange new deep blue
weekend funk, I'm not really asleep
when my sister calls
to say she's just hung up
from talking with Aunt Bertha
who is 89 and ill but managing
to take care of Uncle Frank
who is completely bed ridden.
Aunt Bert says
it's snowing there in Arkansas,
on Catfish Lane, and she hasn't been
able to walk out to their mailbox.
She's been suffering
from a bad case of the mulleygrubs.
The cure for the mulleygrubs,
she tells my sister,
is to get up and bake a cake.
If that doesn't do it, put on a red dress. 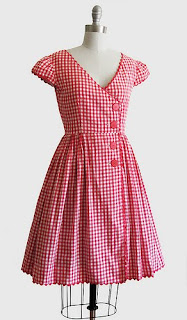 I think most readers will figure out what "the mulleygrubs" is from the context, but, if you'd like to learn more about the word, click here. It's the perfect word for this poem, and isn't a red dress the perfect cure? I love this poem, it is so down-to-earth!

Now go have a piece of cake, then visit your favorite Book Aunt, Kate, for the Poetry Friday Round-Up. 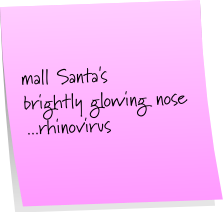 © Diane Mayr, all rights reserved.
Posted by Diane Mayr at 6:30 AM No comments: © Diane Mayr, all rights reserved.
Posted by Diane Mayr at 6:12 AM No comments: 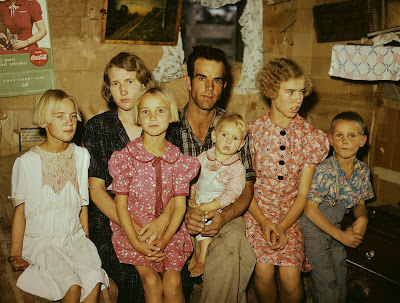 Five clean-faced young ones
and their parents
sit for the portrait.
The oldest, perhaps twelve,
looks away from
the camera. Distracted?
Or merely not wanting
to be part of this world
where Mom and Dad,
barely beyond childhood
themselves, raise a family
in a shack with cardboard walls
taped, nailed, and stained.

Yet, if you look deeper,
there on the cardboard wall
is a framed print and
a Coca-Cola advertisement.
The makeshift shelf is
covered with a cloth.
Now seventy years
removed, the viewer
can only hope
that those odds and ends
of color against
the brown pasteboard
had been enough.

Pie Town, New Mexico was probably one of the last experiments in homesteading. You can read about it in an article from Smithsonian.

I discovered Pie Town during one of my browsings of the Library of Congress's photography collection. The photos are poignant, yet also show determination and community spirit. I hesitated about writing a poem about the family in the photo above, because some of the people in the picture are probably still living! Imagine finding a photo of yourself online with a poem by a stranger--one who knew nothing of your real life and family.

This week's Poetry Friday Round-Up can be found at Read, Write, Howl.

Photo by Russell Lee courtesy Library of Congress.
Posted by Diane Mayr at 12:01 AM 8 comments: I don't really damn the cookie makers, but they sure make it hard on us weak-willed ones!
Posted by Diane Mayr at 6:22 AM No comments: 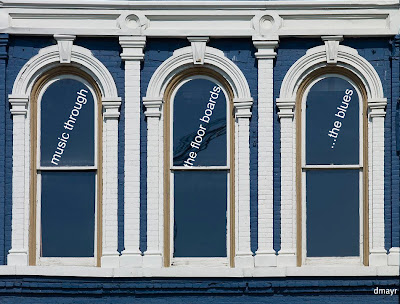 © Diane Mayr, all rights reserved. Photo by Carol M. Highsmith courtesy Library of Congress.
Posted by Diane Mayr at 5:53 AM No comments:

Yesterday I was interviewed by Linda Crotta Brennan at Lupine Seeds primarily on my WW II poems. If you missed it, click here.

Since next Wednesday marks the 70th anniversary of the Japanese invasion of Pearl Harbor, and the entrance of the United States into the war, I thought I would mention a book in the "American Poets Project" series, Poets of World War II, edited by Harvey Shapiro (Library of America, 2003). The collection covers 62 American poets, with 120 poems dealing with the war. In honor of Pearl Harbor Day, I'd like to share this poem by Howard Neverov:

The War in the Air

For a saving grace, we didn't see our dead,
Who rarely bothered coming home to die
But simply stayed away out there
In the clean war, the war in the air.

Seldom the ghosts came back bearing their tales
Of hitting the earth, the incompressible sea,

But stayed up there in the relative wind,
Shades fading in the mind,

Who had no graves but only epitaphs
Where never so many spoke for never so few:
Per ardua, said the partisans of Mars,
Per aspera, to the stars.

That was the good war, the war we won
As if there were no death, for goodness' sake,
With the help of the losers we left out there
In the air, in the empty air.

(Note: the Latin phrases can be translated as "through adversity" and "through hardship." The motto of the RAF was Per ardua ad astra. "Through adversity to the stars.")

This week's Poetry Friday Round-Up is found at Carol's Corner.

I was interviewed at Linda Crotta Brennan's blog today! Check it out here.
Posted by Diane Mayr at 5:14 PM No comments: