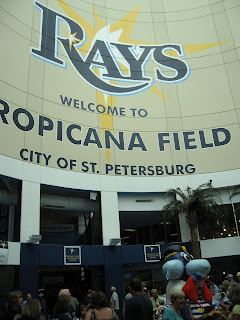 I got back last night from a short family holiday in Florida. One of the highlights of the trip was taking in a Red Sox game! I can't afford to go to a Sox game in Boston--the tickets are hard to come by and well out of the range of a librarian/children's writer. Surprising, though, it was easy to get a ticket to see them play against the Tampa Bay Rays.

My daughter and I went out for dinner on Friday night. We didn't want to go to any of the gazillion chain restaurants that blanket the Orlando area, so we looked for something unexpected. We drove by an Irish/British/Scottish pub. The parking lot was full. There were people sitting at tables outside. We knew there'd be something besides Bud Light on tap, so we turned around and pulled in.

Our waitress WAS Irish. The food was fantastic. The beer was, too. The Sox and the Bruins were on the TVs! We found out that the Sox had games yet to play in St. Petersburg before leaving the area. We were told that tickets, although harder to get since the Rays won the AL pennant last year, would still be available. When we got back to a computer later that night, we found that indeed, there were tickets, and that St. Petersburg was about 1 1/2 hour's drive from where we were staying. It seemed that it would be possible for us to drive there on Sunday morning, attend at least part of the afternoon game, then drive back to Orlando to make our evening flight to Boston. When we discovered we could purchase a ticket for $16.00, that clinched the deal!

Tropicana Field is no Fenway Park, but, it is larger, and thus can hold more attendees at more reasonable prices. It seems a shame that a New Englander has to travel out of the area to see a Sox game live. How many Boston kids, although living in the shadow of Fenway, will never see a game?

Attending the game at Tropicana Field was reminiscent of a NH Fisher Cats game in that there were lots of families in attendance, there were amusingly corny activities taking place between innings, and parents could treat their kids to a second bag of peanuts because they hadn't spent a fortune to buy tickets.

Now for some photos-- 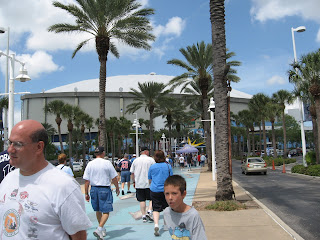 Approaching the domed stadium. That blue beneath everyone's feet is a mosaic pathway of aquatic creatures. 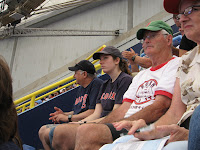 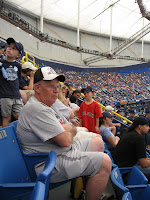 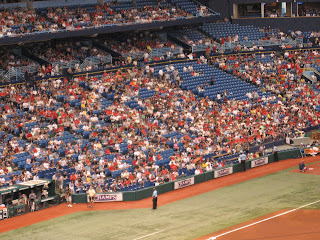 What do you think? Do the Red Sox fans outnumber the Rays fans? Considering that Sox fans' shirts also come in white, gray, and navy, it looks fairly certain to me! 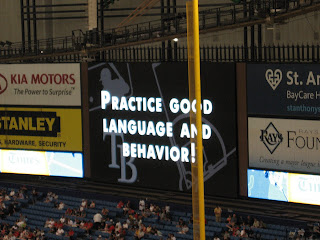 Okay, I admit, I had some trouble obeying this rule--especially after the little blunders at second base!
Posted by Diane Mayr at 7:37 PM