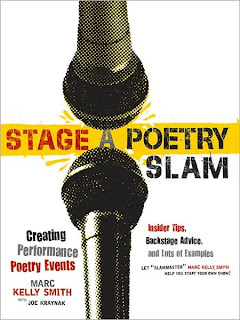 Today's New York Times has an article on the popularity of poetry slams. Now that the general population is taking notice, the art of the slam is going downhill, according to some. Susan B. A. Somers-Willett, author of The Cultural Politics of Slam Poetry: Race, Identity, and the Performance of Popular Verse in America (U. of Michigan Pr., 2009) offered this, "This is something that started in Chicago as a group of oddballs who wanted to do some pretty avant-garde things, but over the years, as it entered the commercial sphere, it has gotten more and more homogenous and started catering to a demographic mainstream."

The article also discusses the disdain academics have for those who participate in slams. It sounds like snobbishness all around! Read the article here, and judge for yourself.

The author of the book pictured above, Marc Kelly Smith, is the acknowledged originator of the poetry slam and is quoted in the New York Times article. The book is published by Sourcebooks and was released in April.
Posted by Diane Mayr at 6:02 PM