Several weeks back, my friend Barbara introduced me to the poem, "Refugio's Hair," by Alberto Ríos. I was quite taken by it's magical realism (I hate terms like "magical realism," but I'm using it here because there's no other way to describe it). I became interested in learning more about the poet. I looked up Alberto Ríos and had one of those "duh" moments when I realized he had written a poem that is tacked on the wall above my desk at the library!

I had done a display for "April is Poetry Month" many years ago and put "Teodoro Luna's Two Kisses" in the display case with other poems and LOTS of books (it is a library, afterall). When May came along I reshelved the books, but I decided to keep "Teodoro Luna's Two Kisses" nearby. Its main character, Teodoro, uses his brows to tell his wife he loves her--a visible yet highly private gesture. I love the idea of little "secrets." What tickled me the most, though, is the last line, which for me, says all you need to know about a good relationship--it's one in which both parties can laugh together.

I received Mr. Ríos's permission to share "Teodoro Luna's Two Kisses" with you, for which I offer my thanks.

Mr. Teodoro Luna in his later years had taken to kissing
His wife
Not so much with his lips as with his brows.
This is not to say he put his forehead
Against her mouth--
Rather, he would lift his eyebrows, once, quickly:
Not so vigorously he might be confused with the villain
Famous in the theaters, but not so little as to be thought
A slight movement, one of accident. This way
He kissed her
Often and quietly, across tables and through doorways,
Sometimes in photographs, and so through the years themselves.
This was his passion, that only she might see. The chance
He might feel some movement on her lips
Toward laughter.

Below is the picture that is tacked up next to the poem on my wall. 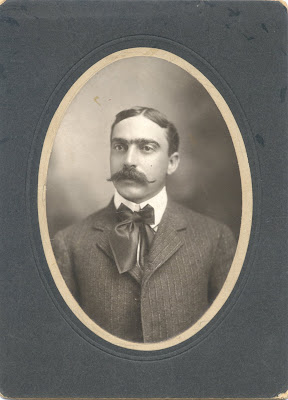 I have no idea who this gentleman is, but I always think of him as Teodoro. (One day soon, I'll tell you how I came to be in possession of Teodoro's portrait.)

Don't forget to check out the Poetry Friday Round-Up being held this week at The Miss Rumphius Effect.
Posted by Diane Mayr at 12:02 AM