Reading Rainbow--No Pot of Gold at Its End

I didn't even realize Reading Rainbow was coming to an end until my daughter sent me a link to a story on NPR.

Wow, has it been 26 years? I watched many an episode with my two kids, and, many an episode on my own--it was such a good show! For years, at the library, we had all the Reading Rainbow books marked and shelved separately because the demand created by the program was so great. But, little by little, public interest waned and we reintegrated the books. We eventually stopped keeping up with the new shows' featured books when it seemed that the local schools were no longer involved in showing the program to their students.

I suppose Reading Rainbow's demise is one more reason to hate the prior administration. The NPR piece inteviewed John Grant, one of those involved in the production of RR, who saw a change in educational philosophy that:

wanted to see a much heavier focus on the basic tools of reading-- like phonics and spelling.

Grant says that PBS, CPB and the Department of Education put significant funding toward programming that would teach kids how to read--but that's not what Reading Rainbow was trying to do.

Anyone who ever watched knows what RR was trying to do--show kids that reading can not only be informative, it can be fun! Why are we no longer teaching kids that reading is fun? [Imagine me letting out a primal scream here.]

Another thing that will fall by the wayside is the "Reading Rainbow Young Writers and Illustrators Contest" that has been held annually for 15 years. I'd been involved with the contest for about a dozen years acting as a judge at NHPTV's studios in Durham. Every spring I'd join others in reading, discussing, and voting on the entries from a particular grade to designate a winner to go on to the national judging. To see one of the winners, from two years ago, that I loved, loved, loved, click here. 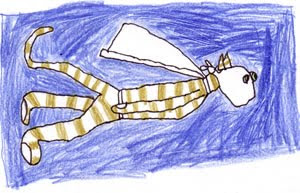 Isn't this cover fabulous? Especially when you consider it was created by a second grader!

Over the past few years many states' public television stations stopped participating in the contest, but New Hampshire continued its partnership. As a result, the number of entries increased with kids sending their stories from states far away. One of my special RR contest memories is attending the awards ceremony and seeing a little boy who had traveled all the way from Brooklyn, NY to receive his certificate. He wore a little suit and tie and the BIGGEST SMILE!

One more thing--several years back the RR website had a recommended list that included books other than those that were featured on the various episodes. I happened upon my picture book, Littlebat's Halloween Story, on the list. What a thrill that was for me.

So, thanks, Reading Rainbow, for everything you've done for me, and the millions of kids you touched over the years.
Posted by Diane Mayr at 9:56 AM