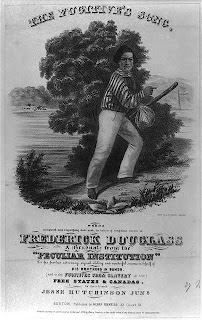 One hundred seventy years ago this month, on September 3, a 20 year-old slave, Frederick Douglass managed to make his way to freedom.

From the Narrative of the Life of Frederick Douglass (published in 1845):

It is impossible for me to describe my feelings as the time of my contemplated start drew near. I had a number of warmhearted friends in Baltimore,--friends that I loved almost as I did my life,--and the thought of being separated from them forever was painful beyond expression. It is my opinion that thousands would escape from slavery, who now remain, but for the strong cords of affection that bind them to their friends. The thought of leaving my friends was decidedly the most painful thought with which I had to contend. The love of them was my tender point, and shook my decision more than all things else.

He managed
to escape, not by luck
but by careful
planning and the help
of others who were willing
to put their own
safety in peril.

How lucky he was.

He left not easily,
but accompanied
by pain, pain
profoundly deep with
the loss of friends
who bound him with strong
cords of affection.

How lucky he was.

How lucky he was
to know the difference
between the tender
point and the point
at which he would
be tendering his soul.
A friendship can
be rekindled,
a soul cannot.

An interesting side note for my New Hampshire friends--"The Fugitive's Song," shown above, was written by Jesse Hutchinson. Jesse was a member of the Hutchinson Family of singers who were from Milford, NH.

The picture is from the Library of Congress, which gave it a copyright date of 1845. Douglass and the Hutchinson Family toured together in England during the year 1845.

If you'd like to read another poem about Frederick Douglass, there is stunning one by Robert E. Hayden here.

The Poetry Friday Round-Up this week is being hosted at Becky's Book Reviews.
Posted by Diane Mayr at 12:02 AM