I've been working on profiles of women for a series of books called "America's Notable Women," published by Apprentice Shop Books. In writing these profiles, I've researched many women, most of whom I had never heard of before starting the projects. Have you heard of Abby Smith or Elizabeth Gurley Flynn? They are just two of the women I have written about or am currently writing about. Both are perfect examples of women who were not afraid to stand up and speak out when injustice stood in their way.

Tonight, the History channel will show The People Speak.

Democracy is not a spectator sport. Using dramatic and musical performances of the letters, diaries and speeches of everyday Americans, The People Speak gives voice to those who spoke up for social change throughout U.S. history, forging a nation from the bottom up with their insistence on equality and justice. Narrated by Howard Zinn and based on his best-selling books, A People's History of the United States and Voices of a People's History of the United States, The People Speak illustrates the relevance of these passionate historical moments to our society today and reminds us never to take liberty for granted. 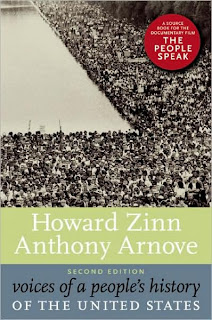 Many of the readings are from unknowns like Elizabeth Gurley Flynn. (I wrote about Flynn on The Write Sisters blog last year, you can read a little about her here.) These were courageous people. People who would probably have preferred to stay at home rather than to speak out, but, they did what they needed to do. It's great that they are being recognized in this television event. I know I'll be watching, I hope you will, too.

Howard Zinn was interviewed on Friday's Bill Moyers Journal on PBS. You can read the transcript, or watch it, here. If Zinn interests you, look for the documentary film, Howard Zinn: You Can't Be Neutral on a Moving Train. (I saw the film at the Coolidge Corner Theatre, near Boston, when it first came out. It's not one of those films that would have been shown here in NH. Fortunately, times change, and NH now has the Red River Theatres, but, I digress...)

Viggo Mortensen, one of the actors appearing in The People Speak, had this to say:

I hope that the Apprentice Shop Books writers will introduce you to some of the women whose stories you haven't heard before.

Early afternoon update: One of the women I profiled for the upcoming Women of the Empire State was Frances Perkins. Perkins was definitely not an unknown, at least not back in the first part of the 20th century, but who today, can tell you anything about Perkins? She was another woman, like Flynn, who fought for justice in the arena of work and workers. Today's Washington Post has a great article about the labor movement, especially as it affects women. You can read it here.
Posted by Diane Mayr at 5:07 AM