Last week I found out that one of my haiku had been given the Mayor of Nagasaki City Award for a haiku in English on the "atomic bomb." The award was one of several given to poems submitted for the World Haiku Festival 2010. The Festival was held in Nagasaki, Japan last month, and was sponsored by the World Haiku Club. The Club publishes the World Haiku Review and the haiku that were honored with awards will appear in the next issue (I'll post a link when is it published). To see the January 2010 issue, click here. (If you have an interest in writing haiku, I recommend the "Guidelines" that appear in the editorial in this issue.)

Before I submitted my "atomic bomb" haiku, I noted the following instructions,

Because of Nagasaki, the special theme is 'atomic bomb'. The term 'atomic bomb' does not necessarily need to appear in your haiku. There is no restrictions except that your haiku must not be submitted for or as an act of political or religious purposes.

I remembered seeing "shadows" in photos of the aftermath of the atomic bomb blasts. These were my inspiration, and I tried to portray the disinterest of the natural world in the machinations of humans.

I have created a haiga using the poem: 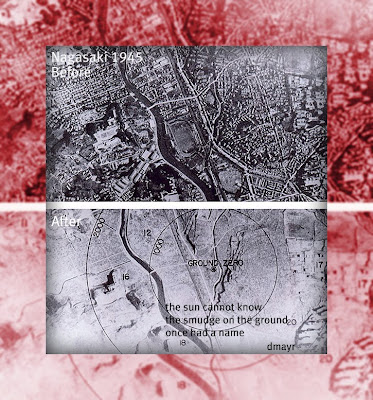 Let me conclude by telling you that Nagasaki has built a beautiful Peace Park near the center of the bomb blast site. A large statue has been installed as "a symbol of the divine love and mercy of Buddha." I hope we can all visit it one day.

This week's Poetry Friday Round-Up is hosted by Tricia at The Miss Rumphius Effect. Tricia is the lovely lady who stretches everyone's poetry muscles each Monday when she gives readers a poetry-writing challenge. I contribute often, but not every week--sometimes the forms are beyond me! I still have a lot to learn...