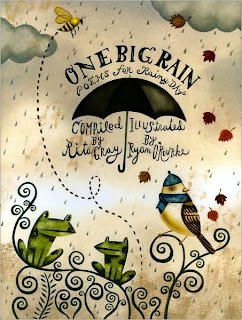 Charlesbridge isn't known for their books of poetry, so when I read that One Big Rain: Poems for Rainy Days compiled by Rita Gray and illustrated by Ryan O'Rourke was recently released by Charlesbridge, I ordered it for the library to see how they handled poetry.

Admirably, I'd say, now that I've had a chance to look at it!

The collection of poems is spare--20 poems spread over 32 pages, but they are well-chosen. Within are many haiku from Japan, a lovely Norwegian poem called "Rain" that should delight children with its wordplay, a poem translated from Spanish, and a sampling of English language poems by a variety of poets.

Here's a haiku by Issa, translated by William Higginson.

a bush warbler...
muddy feet wiped
on the plum blossoms

I am so very pleased that Rita Gray used haiku translated by William Higginson and Patricia Donegan. Both were/are noted haiku experts and their translations do not conform to a 5-7-5 syllable format that you see in so many books for children. They do not use one syllable more than is necessary to detail a moment.

The illustrations are pleasing. The artist uses oil on paper in nice muted tones--mostly grays and greens. (I grabbed the image above from the web, the colors on my book's cover don't pop like they do in the web image, which I think is rather odd.)

The book size is approximately 9" high by 7" wide (would you believe I don't have a ruler?). I guess the smaller size accounts for it's being reasonably priced at $9.95 (list).

All in all, a nice effort from Charlesbridge--I hope to see them publishing more poetry in the future!

Visit Irene Latham at Live. Love. Explore! for this week's Poetry Friday Round-Up.
Posted by Diane Mayr at 12:01 AM