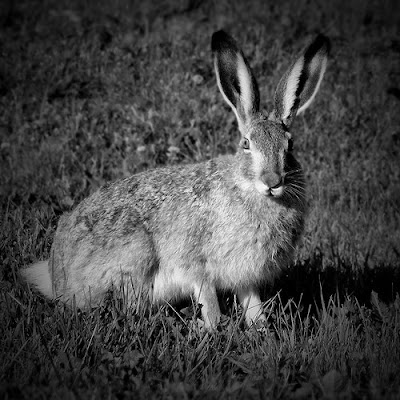 A little poem for the season by Walter de la Mare:

In the black furrow of a field
I saw an old witch-hare this night;
And she cocked a lissome ear,
And she eyes the moon so bright,
And she nibbled o' the green;
And I whispered 'Whsst! witch-hare,'
Away like a ghostie o'er the field
She fled, and left the moonlight there.

What connection do hares have with witches? Here's an explantion from Encyclopedia Mythica:

HARE
Hares were strongly associated with witches. The hare is quiet and goes about its business in secret. They are usually solitary, but occasionally they gather in large groups and act very strangely, much like a group of people having a conference. A hare can stand on its hind legs like a person; in distress, it utters a strange, almost human cry which is very disconcerting to the listener.
Watching such behavior, people claimed that a witch could change her form at night and become a hare. In this shape she stole milk or food, or destroyed crops. Others insisted that hares were only witches' familiars.
These associations caused many people to believe hares were bad luck, and best avoided. A hare crossing one's path, particularly when the person was riding a horse, caused much distress. Still, the exact opposite superstition claimed that carrying a rabbit's or hare's foot brought good luck. There is no logic to be found in superstitions.


This week's Poetry Friday Round-Up is being hosted by Toby Speed at The Writer's Armchair.

Have a great Halloween weekend!

Photo by striatic
Posted by Diane Mayr at 12:01 AM