Last weekend I attended the 2010 Geraldine R. Dodge Poetry Festival in Newark, NJ. The festival has been held every two years since 1986, and this year was its first time being held in an urban setting. Since it was my first time attending, I have nothing to compare it to, but I found the setting easy to navigate, and the whole experience to have been FABULOUS!

My day started at 9 am on Saturday with a discussion of humor in poetry by Kay Ryan and Billy Collins. The day ended, for me, about 12 hours later, after a showcase of poems by Oliver de la Paz, Rachel Hadas, Kwame Dawes and Sharon Olds. I left during the intermission so that I could walk back to my hotel before it got too late, but in doing so, I missed 4 more poets! After hearing only the four, I decided that if ever I were to do a poetry reading, it wouldn't include any poems on cancer, illness, or death! Yikes! That's not to say all the readings included these topics, but, they certainly made up the majority. Olds had a nice mix, though, and her two odes--one to a composting toilet and the other to an anatomical feature of males--were show stoppers! ("Ode to a Composting Toilet" and another can be viewed here.)

What follows is random commentary and quotations taken from my unorganized notes:

Mentioned more than once over the course of the two days was the fact that poets used to be activists and that it seems that poetry and activism have become separated.

Also mentioned several times was the "portability of poetry," therefore it should be a form that is easier to get into the hands of the general public. A few ways of doing just that were offered by the poets and attendees. My favorite was a young woman who mentioned that when she was in high school, she and her friends used to go to a clothing store (which I won't mention other than to say its name has three letters, the first being a "G") and slip poems into the pockets of the jeans! Another was to put books of poetry into waiting rooms. Duh, how simple is that, and how much better than reading through a 2 year old issue of People? Poet Matthew Dickman spoke of bringing copies of his books to his local bar and leaving them for the patrons to look through. He mentioned that the bar now has several books of poetry by him, and others. He drew us a mental picture of a businessman in suit and tie with a martini in one hand and a poem in another.

I've become aware of a growing movement to bring poetry out where it can be experienced by everyone. One of my recent posts about poetry signage can be found here. I also came across a suggestion to write small poems on pieces of paper, fold them into origami figures, and then leave them where they can be found (for example, on buses). Baby steps, but steps all the same.

I'm sure I've talked before about The Adventures of Dr. Alphabet: 104 Unusual Ways to Write Poetry in the Classroom and the Community by David Morice, but it may have been on another blog. In any case, if you haven't heard of it, please look for it, it is full of do-able ideas. 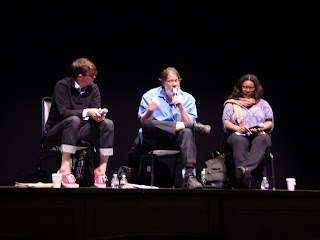 "Do not question the muse." Rita Dove

"Poetry humanizes in the face of dehumanization." Martin Espada

"Hold on to the contraries." Marie Ponset

Kay Ryan mentioned that her poems are meant to be read on the page, but, I think that her poems are even better read aloud, so that you can catch her unexpected use of rhyme. I purchased a copy of her collection, Elephant Rocks, which I had signed. It was the only book I purchased. I found that I have a poet crush on Kay Ryan--she was so down-to-earth and her workshop on craft was so full of humor it was a pleasure to sit through, despite the fact that the venue was a church with hard wooden pews. The major reason I like Ryan's work is its brevity. I'm a big fan of terseness. I found this video from Newshour with Jim Lehrer, if you'd like to learn more about Kay Ryan:

Books and poets to look for (all mentioned in the various talks):

Seriously Funny: Poems about Love, Death, Religion, Art, Politics, Sex, and Everything Else edited by Barbara Hambly and David Kirby (this is relatively new, but I won't consider purchasing it, not even for the library, since its list price is $69.95--are the folks at the University of Georgia Press out of their minds?)

Poet C.K. Williams, of whom Galway Kinnell commented on "the dazzling of his work." It's odd, but I don't believe I've ever come across Williams before, and I'm more than ready for the dazzling. 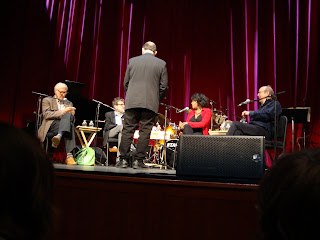 Four ex-U.S. Poet Laureates sat together on stage to discuss the Poet Laureate program of the Library of Congress. They were, Mark Strand, Rita Dove, Billy Collins, and Kay Ryan. Although interesting, it think, overall, the audience found the discussion rather un-enlightening. Ryan best summed things up by saying, "The main function of the Poet Laureate is to be asked 'What is the function of the Poet Laureate?'" Other than being charged with doing two lectures/poetry readings, there appears to be no other official duties. Some laureates tend to be more involved than others, and the group of four ran the gamut from do-nothing to genuinely interested in getting poetry to masses. Of course, money for the position is minimal, but I was encouraged by hearing Rita Dove say, "If you make enough noise, money appears."

I'll share a wee bit more on the Dodge Poetry Festival next Friday, so come back again.

From here, make sure you head over to Liz in Ink for the Poetry Friday Round-Up.
Posted by Diane Mayr at 12:01 AM