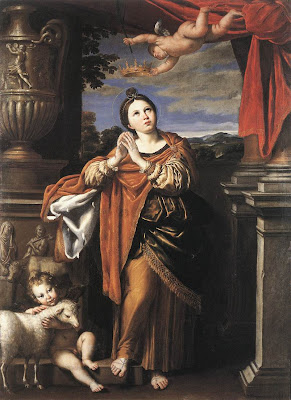 Painting by Domenichino (1620)
Last night was the Eve of St. Agnes.

Stanza VI from the 42-stanza poem, "The Eve of St. Agnes" by John Keats, explains the significance of the night

They told her how, upon St. Agnes’ Eve,
Young virgins might have visions of delight,
And soft adorings from their loves receive
Upon the honey’d middle of the night,
If ceremonies due they did aright;
As, supperless to bed they must retire,
And couch supine their beauties, lily white;
Nor look behind, nor sideways, but require
Of Heaven with upward eyes for all that they desire.

Imagine sending a young girl to bed with promises of dreaming about her one true love--what maiden wouldn't want to go to bed?

So, who is Agnes? Agnes is the patron saint of virgins. Poor Agnes, a mere girl of 12 years, refused to take part in a unwanted marriage since she had already sworn herself to Christ.

Here's the scoop from A History of the Holy Virginity and Blessed Martyrdom of St. Agnes by Honyel Gough Rosedale (1902):

One day, as she was coming from school through the streets of Rome, the son of the chief magistrate met with her; and, casting his eyes upon her countenance fell in love with the maiden. Not knowing who she was, he got his parents to find out, and to ask her in marriage for him. This they did, and at the same time sent her a great many love-tokens, and promised still more. Some most brilliant ornaments the young man bought himself, such as charm the fancies of young girls: but all were thrust aside by the Blessed Agnes, as if they had been so much dross. It was no part of her study, indeed, to please by beauty of body. But she could not but shrink from the thought of being displeasing to her Lord by any uncomeliness of soul, brought on by her own unfaithfulness to Him.

After much effort on the part of the magistrate's son and his family, Agnes still refused to marry the boy. For her refusal, Agnes was put to death on January 21, just a week short of her birthday on January 28.

Here's my take on Agnes:

Twelve years old, just the age
when adolescence begins and
an interest in toys wavers,
eclipsed by a yen for the divine.

Aggie refuses to submit to
the tyranny of hormones
disrupting her dreams and
turning her body against her.

Concerned adults try to mollify
Aggie with baubles. Promises
are made that estrogen dominance
can't begin to reconcile.

Aggie will only refuse! No
trinkets! No! No amity, no
capitulation. Just stubbornness.
Unholy, impure, stubbornness!

Aggie's got a brand new toy.

This week Tara at A Teaching Life is hosting the Poetry Friday Round-Up.
Posted by Diane Mayr at 12:01 AM