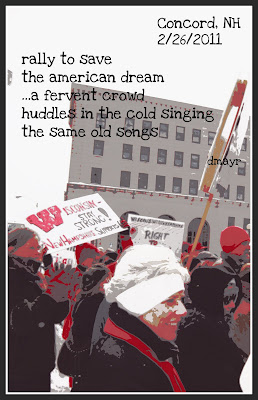 Yesterday, I attended a rally in support of the workers in Wisconsin. Rallies took place in every U.S. state capital, as well as in other cities. MoveOn and partnering organizations called the gatherings "Rallies to Save the American Dream."

Many years ago I worked in a university library in New York City. We were represented by the Teamsters. I was happy to pay my dues. Since moving to NH, where the word "union" is often thought of as a dirty word, I've continued to be a supporter of labor unions, despite not having the opportunity to join one.

I've done a lot of reading about the labor movement for several children's book projects I've worked on over the years, and it has only convinced me that my support of unions is justified. So, I felt it was my obligation to brave the cold and the snow-covered sidewalks of Concord, NH to stand up for my fellow workers in Wisconsin.

Solidarity!
Posted by Diane Mayr at 6:16 AM