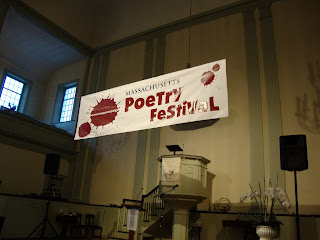 Congratulations to Michael Ansara and all the others who made the Mass Poetry Festival a huge success last weekend! (If you missed last Friday's preview post due to the Blogger problem, you can see it here.)

I had to get up at 5:30 Friday morning to head to Salem State University for the "Student Day of Poetry." Over 400 kids were signed up for a day of readings, workshops, and poetry profusion. Some of the poets appearing, or doing workshops, were X.J. Kennedy (see next week for more about X.J. Kennedy), Regie Gibson, Brian Turner, Jericho Brown, January O'Neil, and a whole bunch more.

One of the high points during the day was the showing of a documentary film Louder Than a Bomb. It is a little out of the ordinary to think of applause in a movie, nevermind applause for a poem in a movie! There was lots of applause! The kids loved it.

After the student program ended, the poetry festival began in earnest in downtown Salem and continued until about 9:30 PM. It was an exhausting day!

Saturday started for me at 10 AM with a fabulous session consisting of a panel of poets who are doing exciting things with poetry besides publishing in books and journals. "The Life of a Poem: Taking Poems Beyond the Page" consisted of four panelists and a facilitator:

Brian Brodeur who has posted interviews with 100+ poets on his blog How a Poem Happens: Contemporary Poets Discuss the Making of Poems.

Carl Carlsen who has set up websites highlighting Poetry of Places (several communities in north shore Massachusetts). This is a project that could be duplicated anywhere!

Kevin Carey who makes films about poets such as this:

The facilitator was J.D. Scrimgeour, Salem State faculty member and poet. Scrimgeour's own nontraditional project is Confluence-Poetry and Music.

Last week's post mentioned the "Bad Poetry" session with Steve Almond that I was hoping to attend. I did attend it and it was laugh-out-loud fun! (Maybe it was just the mood I was in, but I started chuckling as soon as Almond showed up. On his nametag he had written his name as "Steve Almond Joy.") The session was definitely for an adult audience, although "Almond Joy" is definitely 2nd grade humor!

Almond had asked for poets to send in their bad poetry:

Let’s face it even the best poets have some cringe-worthy verse hidden away in the archives. Maybe it was a birthday poem written to your mom when you were seven. Maybe it was your most earnest expression of adolescent angst. Or maybe it was an awkward early effort in a more flourishing poetic life. The time has come to put forward those bad poems with pride. The idea here isn’t simply self-mockery, but a chance to understand how the very worst of our poetry can teach us something about the truth.

At the session he alternated bad poetry "winners" and his own bad poetry with commentary. One of the winning poets was at the session and she was a fabulous sport as Almond is a "no holds barred" type of guy. I'll definitely attend another session if they have "Bad Poetry" again next year!

I heard many people say good things about Sarah Kay and Phil Kaye who appeared at the high school session on Friday, and again on the Main Stage on Saturday. I was doing volunteering stuff on Friday. The Main Stage was outside, and the weather was pretty cool, so I missed them again on Saturday. But, after the festival, I Googled them and found that they started Project V.O.I.C.E.

Young, talented, and enthusiastic--what's not to like? Maybe next year...

Although I appreciated the vast number of session offerings to pick from, I'm wondering if perhaps there were too many. I'd like to see fewer, and the sessions offered in uniform time slots. With fewer sessions the attendance would be greater at each one. With uniform time slots people wouldn't have leave one early to try to catch the beginning of another one. There was too much overlap.

Not every session I attended was a complete success, which I found mostly due to a facilities issue such as acoustics, but, the problems could easily be overcome (especially by insisting that a reluctant poet use a mic).

The festival ended Saturday night with an outstanding performance by two award-winning poets, Mark Doty and Patrica Smith. All I can say is "Wow!" To get a taste of what I experienced, look them up on YouTube and watch their videos. (Use "Patricia Smith poetry" as your search term to narrow down the number of Smiths.)

The festival organizers set up a page on the Mass Poetry Festival site for "Poems of Place." Students and festival participants were invited to post poems about Massachusetts cities and towns.

After I left the reading, I happened upon a walking tour. The "tourists" were all in costume. I wrote the following kyoka (a humorous tanka):

poetry fest ends...
I head back to my car
flying high
there on Essex St.
"witches" on a tour

Salem is a crazy place after dark--even when it's not Halloween!

At The Drift Record Julie will give you the grand tour of this week's Poetry Friday offerings.
Posted by Diane Mayr at 12:01 AM