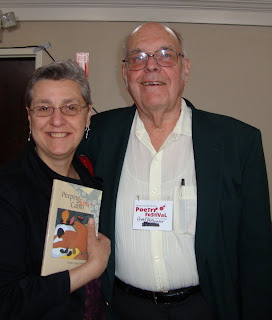 X.J. Kennedy and me at the Massachusetts Poetry Festival.

X.J. Kennedy appeared at the Massachusetts Poetry Festival two weekends ago. I have long been a fan of his, and his wife Dorothy's, Knock at a Star: A Child's Introduction to Poetry, which, as a librarian, I have recommended for years.

I looked up his bio and found that he was born in August 1929, which makes him nearly 82. To someone my age, that's not quite prehistoric, but to a high school freshman or sophomore it surely is! Kennedy's performance at the festival's "Student Day of Poetry" was far from prehistoric, though! His humor made the reading a success.

Kennedy set a poem to the music of an old-fashioned song and sang it in front of the several hundred students. Imagine that--teens whose favorites singers are likely to be Lady Gaga or Will.i.am, enjoying an old guy's song! And imagine standing up in front of a crowd singing! I give Kennedy a lot of credit!

He also conducted a workshop for the kids, "Telling a Story in Poetry." Unfortunately, I wasn't able to attend the workshop as I was a volunteer whose job was directing foot traffic. :-(

The following day, Kennedy was at the main festival for a reading with the Light Brigade, which read a variety of light verse. Much of Kennedy's contribution came from Peeping Tom's Cabin: Comic Verse 1928-2008 [BOA Editions, 2007]. After the reading he signed a copy for me and we had our photo taken.

The book's title surprised me since, as mentioned above, I knew that Kennedy had been born in 1929. The book's "Sort of an Introduction" explains

True, I wasn't born until 1929 and didn't print any verse until 1956; but like the ancient Chinese, I reckon that your age begins at the moment of your conception, almost a year before you emerged. Right away, a fertilized egg starts gestating poems.

Holy cows, I wonder what his mother ate during her pregnancy since most of the poems in the collection are, shall I say, a bit naughty!

Here's one that's suitable for a general audience:

Obligingly, the mild cow lets us quaff
The milk that she'd intended for her calf,
But takes revenge: in every pint she packs
A heavy cream to trigger heart attacks.

For this week's Poetry Friday Round-Up you'll have to head over to Heidi's blog, my juicy little universe. An abundance of delightful poetry links awaits to start off your Memorial Day holiday weekend!
Posted by Diane Mayr at 12:01 AM