Last week I came across several online articles with the title, "Keanu Reeves Plans Haiku Collection." All of the articles basically relayed the same information: Reeves, after the recent publication of his "comedy" book, Ode to Happiness, has decided to try his hand at haiku. (Read a short interview with the book's illustrator, Andrea Grant, here, and a more in-depth article about Reeves and the book, which seems to be the source of all the other short articles, here.)

Here's a memorable quote from Reeves,

Wow, I can hardly wait for this sure-to-be-a-bestseller poetry book. Sounds "interesting," doesn't it? I wonder what's at the end of the tunnel? Or maybe Keanu's a little mixed-up, he's probably looking for the end of the rainbow--a nice little pot of gold. Hmmm, I have my doubts...

I give Reeves credit, though, he at least acknowledges that he is planning to read some traditional haiku. He says,

I'm gonna get deep into haiku, because oftentimes people construe that in English it's five-seven-five syllables, but that doesn't have to hold true, so I want to play with the traditional Basho form. I like that: Haikus of Hope.

I guess I'll have to wait for this next book to be researched, written, and published before I can review it. Until then, I'd suggest that everyone "get deep into haiku." At the very least, read some Basho poems. Here are three that were translated by R.H. Blyth and appear in Haiku selected and edited by Peter Washington, ("Everyman's Library Pocket Poets" series), Alfred A. Knopf, 2003. 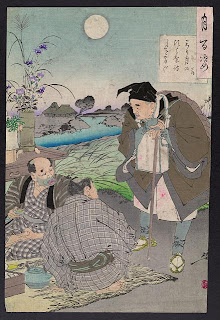 From what flowering tree
I know not,
But ah, the fragrance!


How admirable,
He who thinks not, 'Life is fleeting,'
When he sees the lightning flash.

This week's Round-Up is at Carol's Corner.

Woodcut print of the traveller, Basho, courtesy Library of Congress.
Posted by Diane Mayr at 12:01 AM