There has been lots of poetry news lately, so I thought I would round it up for you this week.

In Kolkata, the city formerly known as Calcutta, the powers that be are supporting the celebration of poetry by broadcasting it aloud. Actually, the real point of the program is an effort to calm drivers in the city's highly congested streets! I guess it's a good thing that they're doing it through poetry, right? Read more here. 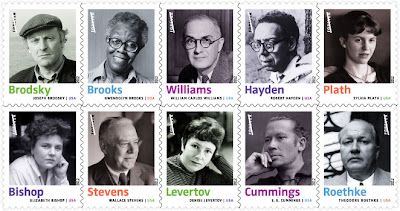 The U.S. Postal Service with be honoring poets with a new series of "forever" stamps! Read about it here. Four out of the ten poets are women! One more would have been more reflective of the United States. In 2010, women made up approximately 51% of the population, but I don't want society to move any faster than it is ready to move. (Who am I kidding? Of course, I do. I want society to acknowledge women artists--do it now!)

The Guerilla Haiku Movement is making tracks to Chicago tomorrow! The movement chalks haiku on city streets. It looks like fun to me, but, I'm slightly prejudiced...

The British poet laureate (the country's first female to be so honored), Carol Ann Duffy, recently said that a poem is "a perfecting of a feeling in language--it's a way of saying more with less, just as texting is." So, texting may be preparing a whole new crop of poets! Here's the report.

Perhaps the most exciting news is the upcoming 100 Thousand Poets for Change worldwide event taking place on September 24. Here's the description from their Facebook page:

Poets in 400 cities representing 95 countries are currently organizing the largest poetry reading in history with over 500 individual events scheduled to take place simultaneously on September 24th to promote environmental, social, and political change.

If you "like" the FB page, you will be updated several times a day with news of new locations, event posters, etc. I especially enjoy seeing the flyers, some of which are collected here.

I'm sure more exciting news awaits you at the Poetry Friday Round-Up being held today at Secrets & Sharing Soda.

Stamps image courtesy Beyond the Perf.
Posted by Diane Mayr at 12:01 AM