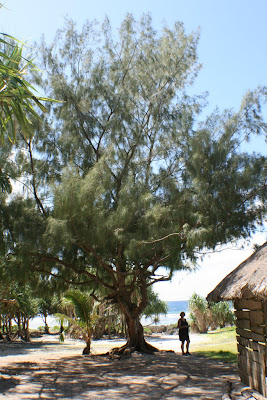 One of my $1.00 finds at the used book store is The Inner Room: Poems by James Merrill. I took a fancy to the poem below because it appeals to the side of me that despite loving books, is easily distracted by what's going on all around.

Scrambling with a book
The hundred-or-so feet
Up the Australian pine
To a slung-rope seat--
The nerve it took!

Why were we here?
To flow. To bear. To be.
Over the view his tree
In slow, slow motion
Held sway, the pointer of a scale so vast,

Alive and variable, so inlaid
As well with sticky, pungent gold,
That many a year
Would pass before it told
Those mornings what they weighed.

And as if to prove the point of my distractedness, after initially reading the poem I found myself looking up an Australian pine. I had never heard of it, but it is true to its name and is found in Australia. Its Latin name is Casuarina, and the Australian National Botanic Gardens tells us that it is "named after the cassowary (Casuarinus) because the long, drooping branchlets were supposed to resemble its feathers."

Then, in researching James Merrill, I found he was born, and I assume, raised in New York City. So now I have the puzzle of how does an Australian pine end up in a poem by a New Yorker? If anyone has a guess, please tell us in the comments below.

April at Teaching Authors is the host of the Poetry Friday Round-Up.

Photo by Arthur Chapman.
Posted by Diane Mayr at 12:01 AM