Yet Another Haiku Miss 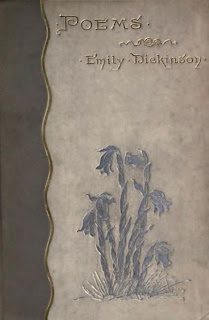 I have a Google Alert set up for the term "haiku," and as a result I get many interesting or odd links in my inbox. Some have to do with the Maui town of Haiku in Hawaii--everything from obituaries to announcements of Unified Field Theory seminars. Others have to do with the Haiku operating system for computers. Some lucky days I get links for haiku poetry!

Over the past two weeks I found several mentions of a new book by Emily Dickinson aficionado and poet, Everett Decker, called haiku Emily! An article about Decker's book mentions that it is an introduction to 125 of Dickinson's poems accompanied by "haiku-style interpretations of the poems based on his own interest in haiku and Japanese philosophy and the similarities he sees between haiku and what he calls the 'hymnal lyric style' of Dickinson's work."

Now, before I go any further, let me say that I have not seen the book, so, I shouldn't really be making a judgment on it on the basis of one or two articles, but, I do have some strong opinions about the way haiku is being promoted to the general public as a way to make cute and clever commentary* without regard for its long and revered history as a poetic form in Japan and elsewhere in the world--it's just not right!

The writer of the haiku Emily! article tells us that Decker, in the preface to his book, says, "I may have had to make her less reverent to make her more relevant..." The article's only sample of a Decker interpretive "haiku" is the following, written about the poem known as "267 Did we disobey Him?":

okay
there was the whole Eden thing -
get over it

Emily probably wouldn't have minded the irreverence, and I don't mind it either, but PLEASE, don't call the vehicle for it haiku! Rant officially over!

haiku Emily! did get me thinking about using Dickinson as a starting point for writing haiku. Her poetry is saturated with images of nature--both natural and human. So, here are a few Dickinson-inspired haiku, and the stanzas from which they came:

a drop of rain--
an eruption of giggles
under the eaves

summer wake
the buzzing of a fly
between sobs

cloudless sky
the blue goes on forever--
my thoughts of you

The Poetry Friday Round-Up this week is being held at A Teaching Life.

*Examples of what I'm talking about when I say "cute and clever commentary" are the haiku computer error messages that circulate periodically via email, SPAM-ku, or any of the various haiku contests held online--click here, here, or here for examples.
Posted by Diane Mayr at 12:01 AM