Poetry Friday--And the Winner Is...

This past Tuesday the winners of the 2011 Cybils: Children's and Young Adult Bloggers' Literary Awards were announced on the Cybils site.

Congratulations to all the winners!

I was extremely fortunate to be a judge of the 2011 award for poetry, Requiem: Poems of the Terezin Ghetto by Paul B. Janeczko. Working with four others, and our mediator, we read and reread the finalists, had lots of online discussion, and came to a well thought out conclusion--Requiem was a book worthy of the prize. 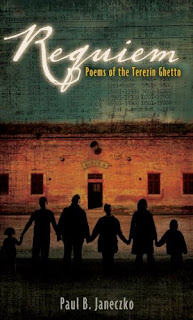 Considering that the six finalists ran the gamut from the humorous treatment of everyday items, such as a toothbrush, to the portrayal of the hatred and despair experienced during the holocaust, and, that the intended audiences ranged from kindergarten to teen, how did the committee decide upon a winner?

I'm glad you asked. We devised a system whereby we judged each book on its own according to certain criteria, these being "kid appeal," originality, musicality, technical skill, and total package.

Kid appeal is obvious. Does the book appeal to its intended audience, as opposed to its appeal being primarily to the adult gatekeepers--teachers, librarians, parents, critics?

Originality, too, is obvious.

Musicality? We decided to look at the language used by the poet. How did it sound to the ear? Was the word choice ordinary or unexpected? This can be rather subjective!

Technical skill had to do with things like line breaks, rhyme, form, and other mechanics of poetry.

Finally, we looked at the total package. Since these books are intended for children, they were illustrated. Did the illustrations add to or detract from the poetry? Were they appealing? Was there enough white space? Too much clutter? Problems with the design? Etc.

It's funny, but none of the criteria listed above had to do with how the poems made the reader feel, and yet, after all the finalists had been studied and judged, it was how the winner affected us that became the deciding factor. Here's how the committee described the winner:

"I am a watcher/sitting with those about to die." These are the words of Elisha Schorr/25565 as imagined by poet Paul Janeczko. In Requiem: Poems of the Terezin Ghetto, we all become watchers, viewing snapshots of the Holocaust, one after the other, each one deepening the grief and raising questions to which there are no answers.

We watch, but we also hear the story of Terezin, voice by voice, insistent and haunting, so that the effect by the end of the collection is almost choral. For each song of despair, there is a concordant and essential song of anger, tenderness or resignation; like a recurring melodic theme, the voice of one child appears and fades and appears again. We hear the violin of one victim playing "as only the heartbroken can play."

Cybils committee members agreed early in the deliberations that this slim volume of poems was a strong contender for the prize, with words like "stunning" and "haunting" coming up repeatedly in our conversation. Ultimately, the voices Janeczko created could not be forgotten.

I could share one of the poems from Requiem, but I'd rather you take a look at the book as a whole. Its illustrations taken from the sketches of the artists who lived in the ghetto, the choice of font, the choice of titles, the layout and design, and the poems themselves--titled with the names of the narrators (and in some cases, their "numbers"), interspersed with snippets of poems set in italics--make for a well-conceived, total package. And I doubt you will be left unmoved...

Myra will be hosting the Poetry Friday Round-Up at Gathering Books. Stop by!
Posted by Diane Mayr at 12:01 AM