Last weekend I had a poetry immersion at the Mass Poetry Festival, which took place in Salem, MA. What follows is a brief summary of the some of what I was able to partake in--there was so much more that was going on, the decision-making process of what to attend was tough.

As I look back, I find I was drawn several of the events that incorporated music (also dance) and verse. I'm a haiku fan, as you may have noticed, so I attended "The Haiku(s) of Jack Kerouac." Kerouac's haiku were read aloud by Raffael de Gruttola with cellist, Peter Zay, improvising a jazz accompaniment. It was funny how the musician produced sounds (strings were bowed, plucked, the body was slapped or tapped) that were different from the ones I imagined to go along with the poems. I have a book of Kerouac's haiku somewhere, I'll have to dig it out, read it again, and try to imagine music to go with it.

"Hoop Suite" was a performance by young people, combining poetry, music, and dance. I've only recently become accustomed to seeing poets read from their laptops, but at this performance, the readers were reading from their iPhones! It was a little disconcerting watching them stare at their palms! It's a new world! 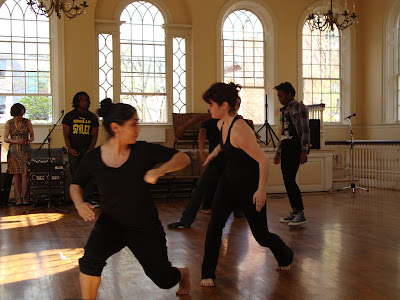 The troupe consisted of modern dancers and krump dancers. (If you're like me and behind the times, Krump, according to Wikipedia, is "characterized by free, expressive, exaggerated, and highly energetic movement involving the arms, head, legs, chest, and feet.") 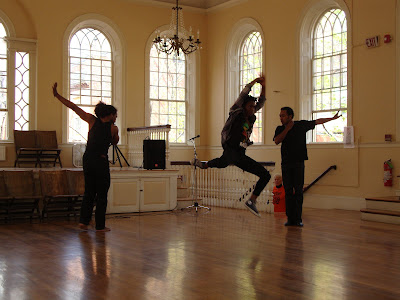 Related to music and dance was a session on villanelles, "Dancing with the Villanelle." A villanelle has its origins in community dance according to the editors of a new "Everyman's Library Pocket Poets" volume called Villanelles. The editors, Annie Finch and Marie-Elizabeth Mali, were joined by two poets whose work was included in the book, Rhina P. Espaillat and Tara Betts. They each read their own work, and several poems by others. What a fabulous introduction to the form! 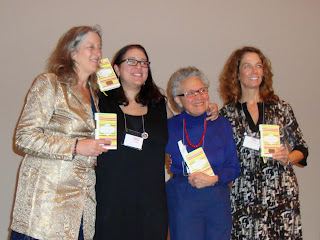 I purchased a copy of Villanelles and all four women signed the book. I later found myself near to Martha Collins, and I asked her to sign her villanelle, which was included in the collection.

Over the course of the weekend, I heard many, many poets read their work, including Frank Bidart, Martha Collins, Stephen Dunn, Nikky Finney, Joy Harjo, Wesley McNair, and Gail Mazur. 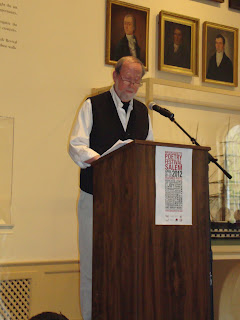 I particularly enjoyed the winners of the "Bad Poetry Contest" hosted by Steve Almond, himself a bad poet with a book to prove it! The poems were hysterically bad, with more than a little salty language employed! The session was held in the atrium of the Peabody-Essex Museum, not exactly the best location for such "sensitive" work!

A session titled, "Amy Lowell and Robert Frost Started It," was about the New England Poetry Club, which began nearly 100 years ago. Several long-time members of the Club, including X. J. Kennedy, spoke about the Club's history. I enjoyed learning that Robert Frost didn't attend the Club for the first four years and that he only ended up becoming an active participant AFTER he was elected president of the group! Kennedy commented on the Club's approaching 100 years and compared it to two other 100 year anniversaries, "The Red Sox and the Titanic are both at the bottom, but the New England Poetry Club sails on."

With any luck, the Mass Poetry Festival will continue for a hundred years. I sure hope so! To learn more about last weekend's events, click here.

Please visit Tabatha Yeatts for this week's Poetry Friday Round-Up and enjoy your weekend!
Posted by Diane Mayr at 12:01 AM