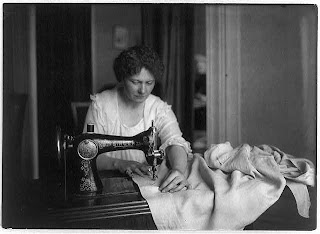 The contest requires that students write a letter to an author about how a particular book has affected them. On its website, the Library of Congress has winning letters back to 2000. One of the letters was written by Amelia Leuer to poet Linda Pastan about her poem, "Caroline." I direct you to the letter with the instructions: bring a tissue.

She wore
her coming death
as gracefully
as if it were a coat
she'd learned to sew.
When it grew cold enough
she'd simply button it
and go.

Such a simple poem had the power to relate to the life a young woman, and to inspire her to create a moving tribute.

Tara at A Teaching Life is this week's Round-Up host.

Photo courtesy Library of Congress.
Posted by Diane Mayr at 12:01 AM