Poetry Friday--On the Day I Was Born

Happy Birthday to me! Tomorrow is my birthday, but I have so many obligations tomorrow, I thought I'd celebrate on Poetry Friday instead.

I had an idea that I would check newspapers for the day I was born and see if I could find a poem to share. I have a subscription to the online site, NewspaperArchive.com, so I did a search on "poem" and restricted it to September 22, 1949. (Yes, I'm that old!)

The first thing I noticed was the number of social events that were marked by the reading of a poem. The Newark Advocate (OH) reported that the Junior Women's Club met the previous Friday evening, and "Mrs. Harold Newkirk read an original poem 'September.'"

The Cullman Banner (AL), gave the complete details of the The Women's Society of Christian Service of the First Methodist Church's celebration of Kitty Holmes' 80th birthday,

Mrs. J. G. Daves made a talk honoring Aunt Kitty, concluding with a poem, 'A Friend's Greeting' by Edgar A. Guest.

Bob Wood, "chalk artist," on a tour sponsored by the Antrim Lyceum bureau, Philadelphia, entertained at the Littlestown Rotary club "when Ladies night was observed." Mr. Wood made "a sketch of Longfellow's 'Skeleton in Armor,' which poem he also recited and added colored lights," the Gettysburg Times (PA) related.

Predictably there were a number of school activity reports that noted the inclusion of poetry, for example, the Tintonka Topic (IA) "School News" contained this item from the first grade: "We learned the poem The Swing because we have been having so much fun on the swings on our own playgrounds. We also drew pictures of the swing."

A syndicated puzzle, Daily Crossword, had as a clue for 30 DOWN, "Metrical division of a poem." There were 5 boxes to fill in.

The Kingsport News (TN) had a page [the] "Associated Press in Pictures" with a photo captioned, "GERMANY REMEMBERS LONGFELLOW Opening lines of Longfellow's poem, 'Bells of Geisenheim' are inscribed on this fountain dedicated to him in Geisenheim, Germany."

Actually, I found that the lines are part of Longfellow's lengthy dramatic poem, "The Golden Legend."

In my search I came across the text to two complete poems, one called "A Prayer," and the other, "Red Roses," but both were horribly sappy and I couldn't bear to include them! So, I will share Robert Louis Stevenson's little poem that delighted the first graders in Iowa, and, I believe, continues to delight children to this day! 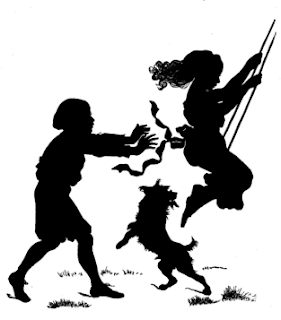 How do you like to go up in a swing,
Up in the air so blue?
Oh, I do think it the pleasantest thing
Ever a child can do!

Up in the air and over the wall,
Till I can see so wide,
River and trees and cattle and all
Over the countryside--

Today, the Poetry Friday Round-Up is being hosted by Renee at No Water River.