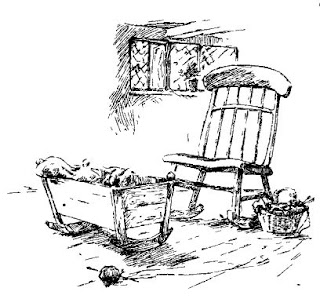 I had to make a momentous decision last weekend. My first grandchild, Julian, was born nine days early. I was forced to decide what it was I wanted my grandchild to call me. I had been thinking about this for a long time. Even before I learned of the pregnancy. I knew I didn't want to be grandma, nor a granny, nor a gram. I have Polish, but also some Austrian, Scots, and Irish roots. It felt pretentious to use Babçi (Polish for grandmother), since I don't speak Polish, nor do I follow many Polish traditions. But, on the other hand, since my paternal grandmother was Babçi it would be nice to pass on some personal connections to the "old country." I decided to go with Babçi (pronounced Bahb-chee) or Babka (another Polish word for grandmother and also a coffee cake). I kind of like Babka--what's not to like about coffee cake?--but, Babçi slips off my tongue more easily. For now, it's Babçi, if Julian ends up calling me something else (like Crazy Cat Lady?), then it may be up for discussion again.

I went looking for a poem about decision-making and I found this one:

The Decision
by Jane Hirshfield

There is a moment before a shape
hardens, a color sets.
Before the fixative or heat of   kiln.
The letter might still be taken
from the mailbox.
The hand held back by the elbow,
the word kept between the larynx pulse
and the amplifying drum-skin of the room’s air.
The thorax of an ant is not as narrow.
The green coat on old copper weighs more.
Yet something slips through it--
looks around,
sets out in the new direction, for other lands.
Not into exile, not into hope. Simply changed.
As a sandy track-rut changes when called a Silk Road:
it cannot be after turned back from.

It's not hard deciding to head over to Mainely Write--the Poetry Friday Round-Up is in full swing!