Happy New Year! Once again I'm participating in a New Year's haiku postcard exchange, a nengajyou in Japan where the custom originated. (See past posts here, here, and here.)

I've already received about a dozen New Year's greetings and I expect more will be trickling in over the next few weeks. This year I sent about three dozen cards to 16 states, the District of Columbia, Canada, India, Ireland, the Sultanate of Oman, Trinidad & Tobago, and the United Kingdom. 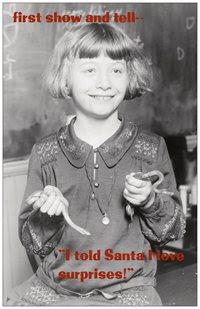 © Diane Mayr, all rights reserved.
The year 2013 is the year of the snake, so I've included a photo with not one, but two snakes! The photo is from 1927 and comes courtesy of Library of Congress. To learn about the characteristics of the zodiac symbol, the snake, click here.

The text on the postcard did not reproduce well on the blog, so if you're having trouble reading it, here is the haiku:

first show and tell--
"I told Santa I love
surprises!"

"First" is a kigo, that is, a word that is used to imply a season or time, in this case, the new year, without coming right out and saying it! For example, if I wrote "pumpkin," you would automatically know it was fall. "Snow" = winter. "Robin" = spring. "Fireworks" = summer (for the 4th of July in the U.S., in another country, fireworks might imply something else).

The last Poetry Friday Round-Up of 2012 is being held at Carol's Corner. Have a safe and happy New Year!