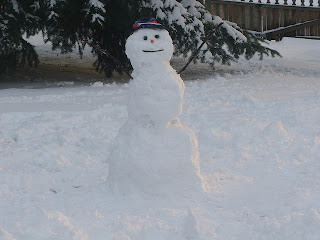 The past two weekends have brought us snow. We'll see what happens this coming weekend. However, it is still February and snow can come as late as May here in southern New Hampshire, so, rather than rail against it, I think it best to celebrate the white stuff. I won't fall back on Robert Frost, although his "Dust of Snow" is a favorite, instead I'll share a poem by Wallace Stevens:

One must have a mind of winter
To regard the frost and the boughs
Of the pine-trees crusted with snow;

And have been cold a long time
To behold the junipers shagged with ice,
The spruces rough in the distant glitter

For the listener, who listens in the snow,
And, nothing himself, beholds
Nothing that is not there and the nothing that is.

The snowman is indifferent to the winter, but, he can't afford to be indifferent, for without winter, where would he be?

If you'd like to see how fine artists have been inspired by snow, the Museum of Fine Arts, Boston, has put together a Pinterest board called "Let It Snow!" The board also contains a few photos of the MFA after the February 8-9 blizzard.

Sheri Doyle will be hosting this week's Poetry Friday Round-Up. See you there!