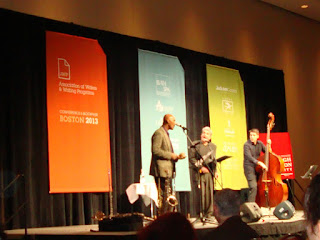 I took this photo from a distance, in poor lighting, so it's not good.
I was, however, able to crop most of the audience heads out of the picture!
Two weekends ago, I had the pleasure of attending "POEMJAZZ: A Conversation and Performance" by Robert Pinsky and three jazz musicians.

He also included a poem by Ben Jonson, a poet and playwright who was a contemporary of William Shakespeare. Someone who lived long before the development of jazz! Pinsky introduced the Jonson poem by telling us that Jonson was like a musician in his use of words, and that his poetry was "ear candy." I neglected to make note of the title of the poem Pinsky performed, but in looking for it afterwards, I found that it may have been "His Excuse for Loving," which Pinsky also performed as part of this Valentine's Day production at Boston University:

In browsing some of the Jonson poems posted online, I came across this one, which I like for its brevity, and for the point it makes about simplicity and beauty:


The Noble Nature
by Ben Jonson

It is not growing like a tree
In bulk, doth make man better be;
Or standing long an oak, three hundred year,
To fall a log at last, dry, bald, and sere:
A lily of a day
Is fairer far in May,
Although it fall and die that night—
It was the plant and flower of Light.
In small proportions we just beauties see;
And in short measures life may perfect be.

Here's a short introduction to Jonson from the Kennedy Center:

You gotta go to GottaBook where Gregory is hosting the Poetry Friday Round-Up for this week.
Posted by Diane Mayr at 12:01 AM