Please click on the image to view it larger. 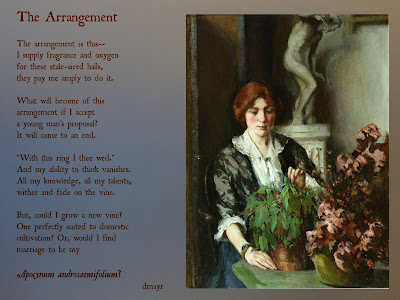 Like Ricky Ricardo, I've got a little 'splainin' to do with this one! First, about the artist: Mary Bradish Titcomb was born 1858 in Windham, NH, the town in which I work. I wrote a profile of Titcomb for Women of the Granite State from Apprentice Shop Books, so I have some information about her. She is a relatively unknown American impressionist, who once sold a painting to President Woodrow Wilson. "Portrait of Geraldine J." still hangs in the Woodrow Wilson House in Washington, D. C.

At age 17, Mary started teaching school in Windham. After her mother died in 1885, Mary moved to the Boston area and taught art and took classes. One of her teachers was the famous painter, Edmund C. Tarbell.

By the time Mary left Windham, she was already considered a spinster, and, she never married. I don't know if she was single by choice or by lack of a suitable soulmate, but, I know she would never have been able to teach, or later paint full-time, if she had married. (Rather surprisingly, it wasn't until the mid-20th century that women in some parts of the country could teach after they married!) I think you can see why I chose the voice I did for "The Arrangement." 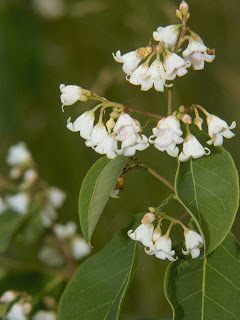 Photo courtesy Wildflower Center Slide Library.
Another bit of explanation: Apocynum androsaemifolium is commonly known as Spreading dogbane (and is also known as Bitterroot). It grows in most of the U.S. and is found around here. The reason I chose it is because it has delicate, pale pink flowers and attracts butterflies, but, it's toxic and its fibrous stems can be used to make rope. You could consider it a plant that would harm or tie one down! (Have I ever mentioned HOW MUCH I LOVE THE INTERNET?)