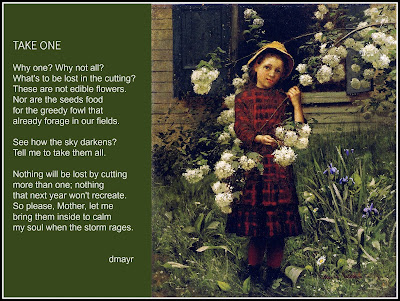 © Diane Mayr, all rights reserved. "Take One" by Gilbert Gaul courtesy The Athenaeum. Click on image to enlarge.

Although the painting "Take One," by American artist, [William] Gilbert Gaul, painted circa 1881, is full of flowers, the feeling I get from the painting is more dark. I thought perhaps there was a storm coming. I wrote the poem as it appears here, using the title as my launching pad. After I had finished it, I decided to research a little (I know--a backwards way of doing things). I was off from one thing to the next and spent several hours (sort of like I did with last week's ekphrastic poem) skipping around cyberspace.

First I tried to figure out where, and what time of year, the scene took place. Gaul lived in the New York/New Jersey area for a good part of his life, so, that seemed like a good fit. I looked at the flowers pictured. Purple iris blooms in the spring (I have photos of irises that I took in late spring here in NH, so you have to figure they would bloom a few weeks earlier in the NY area). At first I thought the white flowers might be lilacs, since they also bloom around that time. But, I dismissed them, since the white flowerheads shown are more ball-like than lilac flowerheads, and the branches seem to be long and supple. The larger lilacs I've seen have tough, woody branches without much bend to them. So I googled around looking for other round flowers that grow on bushes. Hydrangeas were dismissed--the leaves and branches were all wrong. Then I found the Chinese Snowball, which is a type of Viburnum. A description I found online seemed to fit the bill--blooms in April-May, has round flowers, grows to be a large bush. The most amazing thing I found was this, "The flowers are sterile on the shrub so it won't produce fruit." That made it fit perfectly with what I had written nor are the seeds food.

So, my setting is New Jersey in early May. Then I went looking for weather-related things. I used as a search term, "weather in 1881," and damn if I didn't find a New York Times article from December 31, 1881, titled "The Weather of a Decade: The Temperature of 1881 as Compared With Other Years." And here's the first sentence, "The weather of 1881 has been peculiar..." Peculiar in that there were massive thunderstorms in May? Perhaps...
Posted by Diane Mayr at 6:02 AM