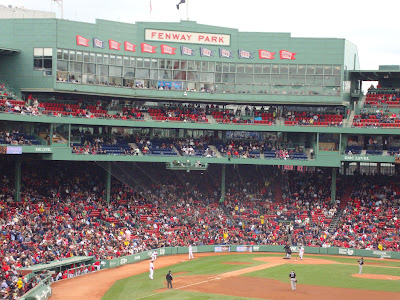 The Red Sox will be back at Fenway on Monday! And, due to the horrible past few seasons, this year, we may be able to get tickets for a game (we can hope).

I'm not a rabid fan, but I am convinced that baseball is THE American game. I know for a fact that I have written more baseball haiku than on any other sport! The only other one that comes close is fishing (and I don't fish). I did write one about the World Cup a few years ago, but it didn't come from inspiration, it was an assigned topic. I digress...

To celebrate the opening of the 2013 MLB season, I'm going to share a few of my baseball haiku (some have been posted before).

This first one was written back in 2009 on a visit to Florida. Back then it was easier to get tickets at an away game than it was to get tickets for a home game in Boston. In Florida, it seemed that more than half the spectators wore Red Sox jerseys! This photo was from before the game, still, the Red Sox red clearly beats out the Tampa Bay Rays blue! 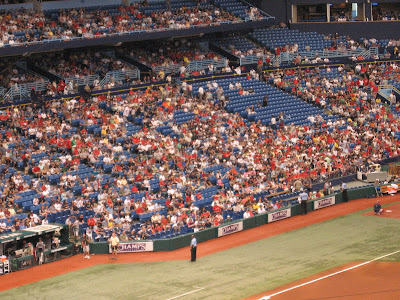 In 2009 I also went to a number of New Hampshire Fisher Cats games, resulting in these: 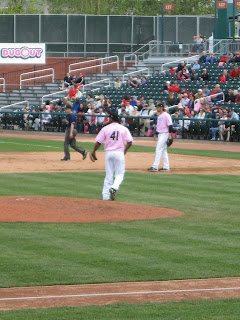 seventh inning stretch
all around me not one
voice in tune

Who would have guessed there was so much music at minor league ballparks?

This photo was taken before a game in Fenway Park back in 2010: Another Fenway poem from the bleachers. It's like a giant party up there, and since it's so high up, it's easy to lose track of what's going on on the field!

rain delay
only the cheapskates
stick around

2011 and 2012 Red Sox tickets were still difficult to obtain, but they were playing lousy ball, so we didn't think it was worth pursuing them. As I said, maybe this year we can head down to Boston. I've got "Sweet Caroline" running through my head right now. This is just what it feels like up in the bleachers:

I'd be remiss if I didn't mention one of my favorite haiku anthologies: Baseball Haiku: American and Japanese Haiku and Senryu on Baseball, edited by Cor van den Heuvel and Nanae Tamura (W. W. Norton, 2007). I urge you to look for it if you're at all interested in haiku.

Visit my haiku-loving friend, Robyn Hood Black, for the Round-Up today. Next week, I'll be hosting the Poetry Friday Round-Up right here! I think I'll post a short baseball poem that's not a haiku, and is not really about baseball, so come back!

All haiku and photos © Diane Mayr, all rights reserved.