Poetry Friday--"Poetry Is Not Drowning"

"Poetry is not drowning, but swimming into new territory," is a post by Billy Mills on a blog run by the British newspaper, The Guardian. The gist of the article is this: the amount of poetry currently being published in book form may be diminishing, but, poetry will continue to live online. Here is what Mills had to say,


So, where some see poetry as a dying art, I see it as an early and enthusiastic adopter of new technologies, partly because it has to be. Why? Well, if selling what you're making isn't going to make anyone rich, but you want to share it with those people who are interested, then you have to work out the cheapest way to do so. And right now it looks like that way is a mix of online, performance and print, with each supporting the other in a new model of publishing, one in which the printed collection is no longer the only accepted mode of publishing but remains a key part of the package.

I have to agree with Mr. Mills. I would have liked to have sold my Kids of the Homefront Army: Poems of World War II America manuscript to a regular print publisher, but after a few unsuccessful attempts, I decided that it wasn't all that important to me to make money. The important thing was to share my work, especially with those who were so generous in sharing their memories of WW II. Several of these people had passed away, and I didn't feel I had the luxury of shopping the manuscript around any longer.

The cheapest and easiest way for me to publish the poems was on a blog, HomefrontArmy.com. I posted poems several times a week from June 2011 to May 2012. I have recently changed the posting dates so that the entire manuscript can now be read from top to bottom in roughly the order in which the war occurred.

I thought I would share one of the poems today to encourage you to visit Kids of the Homefront Army if you haven't been there before. 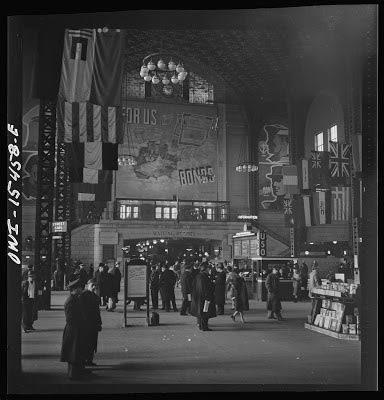 Things have always
been rough, after all,
there are eight kids
in the family. Father
worked days while
mother worked nights,
and we barely got by.
Now mother is working
at the railroad station.
She cleans out the cars
that carry the troops
on their way to the war.
I never would have thought
that a war could be good,
but for us, it has been.
Mother brings home
sandwiches and candy
bars left behind by
the soldiers, and now
even she gets to eat.

I like this one because we get to see that for some, the war had a beneficial side to it. Those who barely made it through the depression were able to find jobs once the war began. One of the individuals who sent me his memories of the war years told me that when people were out celebrating the end of the war in 1945, the only thing he, a teen, could think of was that he'd soon be out of a job.

I'm thinking that I would like to turn Kids of the Homefront Army into an ebook, but that's a project for another time...

Stop by Teaching Young Writers where Betsy is hosting the Poetry Friday Round-Up AND a Chalk-A-Bration!
Posted by Diane Mayr at 12:01 AM