Back in April, my daughter became engaged and started planning a wedding for August.

In May, I went to a local flea market. I have a love/hate relationship with flea markets. I love finding cool stuff, but I hate bringing my finds into an already cluttered home. I went to the flea market that day with a specific mission in mind--to seek out rhinestone brooches or buttons so that my daughter could make a brooch bouquet. (If you haven't come across the brooch bouquet, do a Google image search!)

I had planned on looking at nothing else, but, I went with a friend who spotted a box of Haikubes, which looked to be brand new (in fact, upon inspection, two-thirds of the cubes were still sealed in plastic). 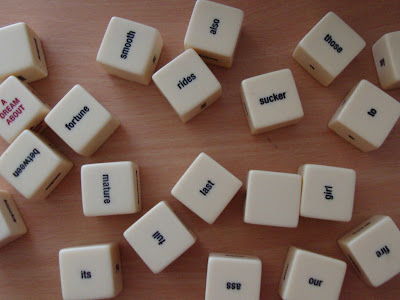 "You have to get it," she said. "You're probably the only person here who writes haiku, or even knows what haiku is. It's only two dollars..." That was it. I purchased the Haikubes and brought them home, where they have sat, untouched, until this week.

I finally decided to take a look at the game. There are 63 six-sided cubes. Most cubes have five sides containing different words; the sixth side is blank. After looking through the cubes, I had my doubts about their usefulness for writing haiku. Some of the words were downright odd, "wicked," "yelled," "dilemma," or "#@&*#!!." A couple of the cubes are "thematic" and are used to give the player a goal in creating a haiku, for example, "a desire for" or "my family."

Haikubes were created as a game, and as such, would probably be fun with a few people trying to create poems in the 5-7-5 syllable format as required by the instructions. However, there are several reasons why the game is not suited to writing "real" haiku: 1. The whole 5-7-5 thing! 2. Many of the words are in the past tense, whereas haiku should take place in the here-and-now. 3. Nature or seasonal words are definitely lacking. 4. If you subscribe to a definition of haiku as "the essence of a moment keenly perceived," then it's going to be difficult to find that moment in the choice of words found on the cubes.

Since my parlor game days are few and far between, I decided to use the cubes as prompts to writing haiku. Since 63 cubes are too many to roll, I grabbed ten at a time to see what I could come up with. Here is the result of my first roll (any blank sides were rolled a second time):

Wow, not much haiku material here. I picked out three words and came up with:

late August swim
my foot in a tangle
of tourist trash

I dropped the "ing" from swimming, but, since I'm making up the rules as I go along, it's allowed!

I next used one of the words, and ideas implied by some of the other words, to come up with this senryu (a senryu is like a haiku, but about human nature, instead of Nature):

in a speedo
...her prince has lost
his charm

Attempt #3 is a non-Japanese style poem, again with a Prince Not-So-Charming bent, and, a lot of punning:

She screwed up
her courage to ask
him to go to the shore.

But the growing
swell precluded any
thoughts of swimming safely.

Better to be left
on shore than to tangle
with the waterfront's charms.

This relatively long poem used seven out of ten words.

I was challenged, I had fun, and I certainly got my $2.00 worth from a flea market find!

For the Poetry Friday Round-Up this week, head over to No Water River, where's there's plenty of poetry, but without water, not much swimming!