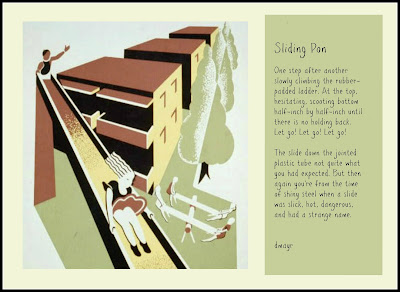 © Diane Mayr, all rights reserved. WPA poster courtesy Library of Congress. Click on the image to enlarge it for easier reading.

I was thinking about the quick slide from Labor Day until Christmas and ended up with this poem that has nothing to do with either holiday, but instead, playground equipment from the past!

I'd like to know if any of my readers called a playground slide a "sliding pon" or "sliding pond"? I believe it's a name used in the New York City area years ago. In my mind I saw it as stemming from "slide upon," but I thought I would look to see if I could find its origins. The Word Maven dismissed my guess: "Two problems with this are that upon is a more formal word than children would normally use, and also of course that slide-upon is not known to have ever been used." Then, I found an entry at Wordwizard, "At the turn-of-the-century (Twentieth!)a company named 'SLIDE-UPON' manufactured the original slide that appeared in many of New York's great playgrounds." It looks like I was at least partially right!

Hey, does anyone remember throwing dust or fine sand on the slide to make the downward ride even faster?

Head over to Teach Mentor Texts for today's Round-Up.
Posted by Diane Mayr at 12:01 AM