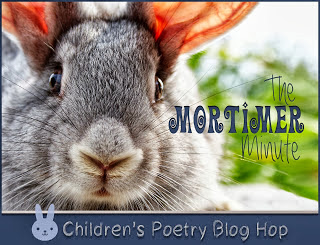 I was tagged by Julie, who last week posted a lively exchange with Mortimer the rabbit.

Here are the "rules":

1. Answer three short questions, one of them taken from the previous Mortimer Minute.

2. Invite another blogger (or two or three) to take part on the following week--writers, teachers, or anyone who loves children's poetry is the perfect choice.

3. Link to the previous Mortimer Minute and to your choice for next week.

I've followed #3 and will do #1 next, but, sadly, Mortimer appears to have reached the end of the road here in New Hampshire. I haven't been able to find another blogger who hasn't already been tagged, or who is willing to take on the task of being questioned by a rabbit. (Perhaps it's a problem of rabbit allergies? Or not knowing the language?) If anyone wants to take part next week, please comment below and I'll add your link.  Update:  Donna J. T. Smith of Mainely Write has graciously volunteered to be tagged! Yay, Donna! Check out her beautiful poem for today, "Days of Roses."

By the way, Mortimer speaks English, although he does speak very quietly, so you have to listen carefully. Mortimer told me he is multilingual and he taught me the word for rabbit in several languages: Spanish = conejo; German = Kaninchen; Indonesian = kelinci; Afrikaans = haas; Czech = králík; Swahili = sungura; Hindi = खरगोश. Rabbits are found on every continent except Antarctica! They are not native to Australia, but after they were introduced there by the Europeans in the mid-19th century, they multiplied like...like rabbits!

Mortimer:
Do you have a pet rabbit?

Me:
No, I have two cats. I did, however, have a grandbunny by the name of Miles. Sadly, he moved into that big hutch in the sky. Miles is featured in a haiku I wrote, which you can see here. Here's a photo of Miles in 2009 when he lived in the Bronx (before he moved back to Massachusetts, and then to his final home): 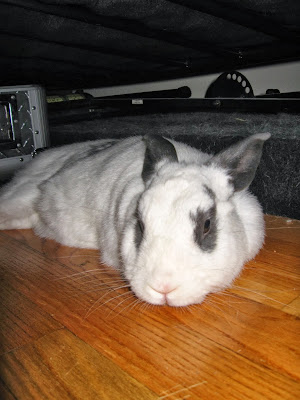 Resting under a non-edible piece of furniture, alongside some pieces of DJ equipment. FYI: Miles was named after Miles Davis.

Mortimer:
He's a fine looking rabbit! Do you have any human grandchildren?

Me:
Yes, I do! A little grandson who will be one at the end of this month. Here's a photo of him saying, "Cool." It's a handy word--it can mean temperature, as in the weather, or, awesomeness, as in "Mortimer, you're one, cool, coney." 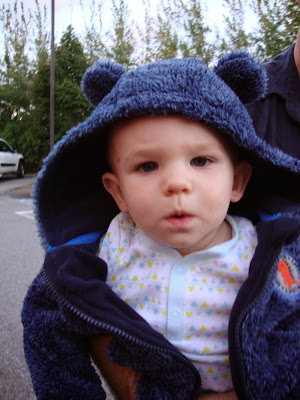 Mortimer:
I also asked this of Julie: what children's poem do you wish you had written?

Me:
Last Friday I mentioned "Ducks' Ditty," by Kenneth Grahame. I also wish I could have written this one by Aileen Fisher:

Don't you think it's probable
that beetles, bugs, and bees
talk about a lot of things--
you know, such things as these:

The kind of weather where they live
in jungles tall with grass
and earthquakes in their villages
whenever people pass!

Of course, we'll never know if bugs
talk very much at all,
because our ears are far too big
for talk that is so small.

Mortimer:
Oh, I love it! I know just what she means when she's talking about the jungles and the earthquakes!

Me:
I'm glad you like it. Both "Little Talk" and "Ducks' Ditty" are found in an older (1965) anthology called Piper, Pipe that Song Again: Poems for Boys and Girls, selected by Nancy Larrick.

Mortimer:
Thanks, I'll look for it.

Me:
It's no longer in print, but you should be able to find it from a used book vendor. I looked at AbeBooks the other day, and there were several copies available for less than $4.00, and that included shipping!

Mortimer:
Well, it's time to go! Which way to the highway?

Me:
I-93 is less than a mile from here. Head south if you want Massachusetts, go north if you're headed for Canada! And, if you're looking for the Round-Up, hosted by Laura Salas, click here.
Posted by Diane Mayr at 12:01 AM