Today is the last Monday of National Poetry Month, and the last ekphrastic poem for April. Thanks for stopping by to read poems inspired by visual art!

I wasn't able to find anything about Kinder und Hund ("Children and Dog"), other than it was painted by Paul Klee and dated 1920. Klee, of German-Swiss descent, wasn't in Paris in 1920, but I took the liberty of setting the family there and of giving the children names, and of course, naming the dog. (I think he looks like a Sandro, don't you?) 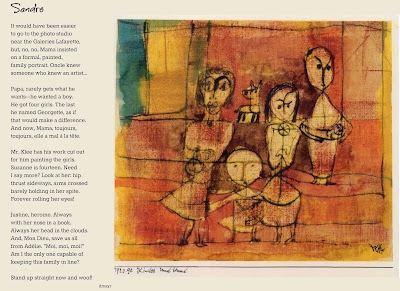 You can click on the image to enlarge it, or, the text is below.

It would have been easier
to go to the photo studio
near the Galeries Lafayette,
but, no, no, Mama insisted
on a formal, painted,
family portrait. Oncle knew
someone who knew an artist...

Papa, rarely gets what he
wants--he wanted a boy.
He got four girls. The last
he named Georgette, as if
that would make a difference.
And now, Mama, toujours,
toujours, elle a mal à la tête.

Mr. Klee has his work cut out
for him painting the girls.
Suzanne is fourteen. Need
I say more? Look at her: hip
thrust sideways, arms crossed
barely holding in her spite.
Forever rolling her eyes!

Justine, heroine. Always
with her nose in a book.
Always her head in the clouds.
And, Mon Dieu, save us all
from Adélie. "Moi, moi, moi!"
Am I the only one capable of
keeping this family in line?

Stand up straight now and woof!

© Diane Mayr, all rights reserved. Painting by Paul Klee (1920), courtesy The Athenaeum.
Posted by Diane Mayr at 5:59 AM