Last Friday, on my library blog, I wrote about an new anthology of baseball poems titled, Heart of the Order: Baseball Poems: An Anthology edited by Gabriel Fried. The anthology contains more than 70 poems about baseball.

Before I share a poem from the book, I'd like to tell you about an interview Robert Pinsky did with WBUR's Bill Littlefield, the host of Only a Game. In it, Pinsky said,

The family tie is a strong one and it appears again and again in Heart of the Order. Here's an example:

Most were married teenagers
Working knockout shifts daybreak
To sunset six days a week--
Already old men playing ball
In a field between a row of shotgun houses
& the Magazine Lumber Company.
They were all Jackie Robinson
& Willie Mays, a touch of
Josh Gibson & Satchell Paige
In each stance and swing, a promise
Like a hesitation pitch always
At the edge of their lives,
Arms sharp as rifles.
The Sunday afternoon heat
Flared like thin flowered skirts
As children and wives cheered.
The men were like cats
Running backwards to snag
Pop-ups & high-flies off
Fences, stealing each other's glory.
The old deacons & raconteurs
Who umpired made an Out or Safe
Into a song & dance routine.
Runners hit the dirt
& slid into homeplate,
Cleats catching light,
As they conjured escapes, outfoxing
Double plays. In the few seconds
It took a man to eye a woman
Upon the makeshift bleachers,
A stolen base or homerun
Would help another man
Survive the new week.

I'm probably the most un-sporty person I know, but, somehow I've managed to post a number of times about baseball. Click here, here, or here. However, the poems I write generally have little to do with the playing of the game!

I'll finish with an original poem, which is only tangentially about baseball: 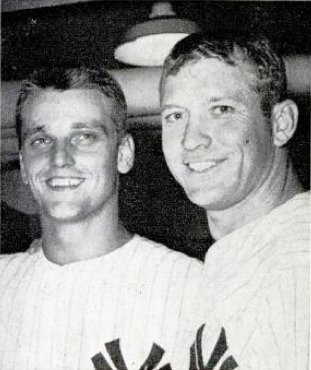 We never went on cruises
or stayed at vacation resorts.
Our vacation spots were
cheaply rented or borrowed
bungalows, often shared
with aunts, uncles, and cousins.

One night we all went to dinner.
Nothing fancy, not expensive,
but the food must have been
good, because two men of
some renown came in to eat--
Mickey Mantle and Roger Maris.

I'm sure you've heard of them.
They were gods--baseball gods!
We got their autographs on
the greasy spoon's cheap paper
napkins. If only someone had
had a camera to take a family shot.

Violet Nesdoly / poems is where all the cool kids are hanging out today--see you there!