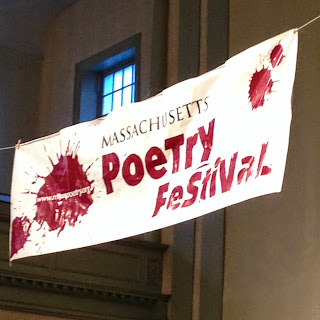 Is it just me, or is anyone else bothered by a poetry banner that looks like it's been splashed with blood?

I'm writing this within hours of the close of the 2014 Mass Poetry Festival. It was fabulous. A poetry-filled weekend that had me scribbling down quotes. Now, I hope my handwriting is legible, and my memory good enough, for me to interpret what I wrote down!

One session that I particularly enjoyed was a panel discussion of some of the poems included in the Mass Poetry Festival's "Common Threads" program. The program brings a pre-selected group of poems into libraries, nursing homes, and other places. People who don't necessarily come in contact with poetry on a daily basis are introduced to the poems and a facilitator leads a discussion. One of the panelists was tasked with presenting Stanley Kunitz's "Halley’s Comet." By way of introduction, he told us that Kunitz's father had committed suicide prior to Stanley's birth, then, he read the poem. It had the immediate effect of reducing me to tears. It was all I could do, to keep from sobbing out loud. It reminded me of the elderly nun who had explained to my daughter that she didn't mind dying because she would finally get to meet her mother who had died in childbirth. The woman had been in her 80s or 90s and still felt the loss. The poem is here if you, like I was, are unfamiliar with it. For me, the longing in it is palpable, and, if I had taken nothing else away from the weekend, that poem would have been enough.

Another session was called "The Sense of an Ending," and in it, four poets discussed writing endings for poems. One brought up the idea of what she called her "personal cliche." For her it was ending a poem by "throwing in a stray cat, or a bird flying by." These images are powerful for her, and, therefore, have become overused in her work. Do you have a personal cliche? I sometimes think I write too many poems that go along dum-de-dum-de-dum-de-dum then BAM! I think I need to mix up my endings a bit. Not every ending has to grab the reader by the [fill in your favorite cliche here--throat, balls, whatever]. Another panelist said an ending is "a decision with lots of levels of consciousness."

I heard many well-published poets read from their work. Friday night we listened in awe to Philip Levine and Carol Ann Duffy. I've heard Levine at the Dodge Festival, so I knew how good he was going to be. Duffy, with her accent was fun to listen to, and, she read some really funny poems! "Mrs. Midas" is one (the video is from another festival, however):

Oliver de la Paz and Susan Rich read Saturday afternoon. They were supposed to have been joined by Marge Piercy, but she couldn't get off the Cape due to the Bourne Bridge being closed. I enjoyed both de la Paz and Rich. At one point de la Paz was reading some pretty heavy stuff and he turned to the audience and said, "I'm a poet, I'm allowed to wear black!" 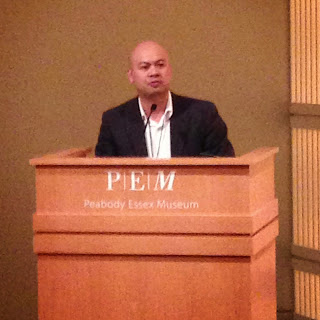 One of Saturday night's line-up, a poet I had never heard read before, was Li-Young Lee. Afterwards, I was asked what I thought of his reading. I said it was "interesting." As you probably all know, "interesting" is code for "not so great, but if you liked it, I don't want to offend you by saying so." The two women I spoke with had seen him on a number of occasions and found Saturday's performance off-putting and completely out of character. One even suggested he might have had a little too much liquid refreshment before the performance. He conducted himself, throughout the reading of three love poems, with head down, hair covering his face, and not at all engaged with the audience. Odd.

Lee was joined by Kim Addonizio, who was a hoot. And, someone I would definitely look forward to seeing/hearing again.

Cornelius Eady rounded out the headliners on Saturday night. I had seen Eady earlier in the day when he performed along with members of his band. (The photo is from the earlier session.) 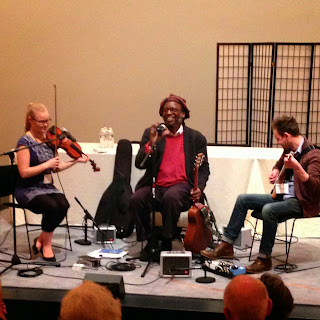 I was pleasantly surprised by the light-hearted poems read by Rhina Espaillat on Sunday. David Ferry read a bunch of classical poems he had translated, and, I was a little disappointed in not hearing some of his original work. Lucie Brock-Broido also read, and I'll have to get back to you on her work, I'm undecided as to what I think. (She definitely wore the poet-black, though.)

Here's a poem that is based upon what happened to me at one of the sessions:

"We Listen With Our Ears, Dear, Not Our Mouths."

I want to yell: Shut up! Shut up!
I stop, though, when I realize

this anger is the one thing
working to keep me awake.

I wasn't as enamored of the readers as she seemed to be!

Jama Rattigan is the hostess with the mostess for this week's Round-Up.

Photos and poem © Diane Mayr, all rights reserved. The lighting was awful and, thus, the resulting pictures were awful, so I didn't include most of what I had taken. :-(