Poetry Friday--Who's Up for a Challenge?

One day, while reading through Facebook, I came across a comment on an illustrator friend's post. The commenter had mentioned receiving her "Sketchbook Project" blank book in the mail. Being a curious person, I took a trip via the Google and found a website for The Sketchbook Project 2015, described as "A crowd sourced library of artists' books."

I read through and learned about the Mobile Library and the permanent Brooklyn Art Library.

We use 'sketchbook' as [a] loose term for experimentation in creativity. You can write, draw, collage, share photographs, list, document, record, tell a story, or any other way of filling a page.

In other words, as a writer, I can participate!

I signed up, paid my fee, and shortly thereafter my sketchbook arrived in the mail! The project deadline is January 31, 2015, so I have plenty of time for pre-planning and execution. When I signed up, I checked off "History Book" as my theme. I'm considering using public domain Library of Congress photos as a jumping off point and writing more poehistry. Something like what I did with many of the poems in Kids of the Homefront Army. (An old post on writing from photos, which is archived at The Write Sisters blog, explains in more detail.)

The sketchbook is only 32 pages--I think I can come up with enough to fill it. (I'd better be careful. My late mother used to say, "Famous last words!" whenever someone made a cock-sure pronouncement.)

The 2014 tour has begun. The stop closest to me is Portland, Maine (by closest I mean a 2+ hour drive), but it won't occur until October 2. A Thursday! From 11 until 3. I'm guessing I won't make it, but maybe you can catch one of the stops near you. Here's the schedule.

Perhaps you would like to fill a 32 page sketchbook with your poems and share it with the world. Be aware: there are some copyright stipulations you must agree to. For me, there's not enough time left in my "career" as a poet, to worry about granting nonexclusive rights to the Project, however, you may disagree.

You didn't expect a P.F. post without a poem, did you? I looked through some photos and found this one: 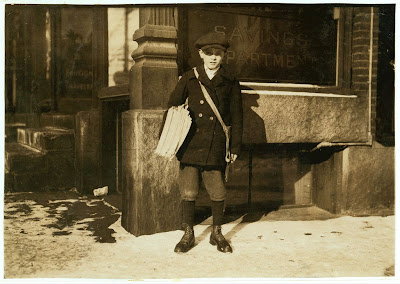 This photo had a date and specified the papers were from Boston, so, I did a little research and found a copy of the morning edition of the Boston Daily Globe for December 18, 1916, which was a Monday. The headline for that day was "Bomb Blows Hole in Police Station Wall." Anarchists were blamed and the bomb was suspected to be made of dynamite. And that was just the main headline! Holy cows! I will start my book with this poem about young Alfred:

I never spend much time
in school what with money
to be made on the street
hawking the Boston papers,

but I know enough words
to make passersby hungry
for what's in the 16 pages
of the Boston Daily Globe.

dressed only in nighties!
Wouldn't you want to find
out more? Sure ya would!
Only two cents, Mister.

I imagined Alfred talking to the man taking his picture and demonstrating a talent for melding front page stories to make one, sensational, paper-selling, tale.

I could go many ways from here. More poems about the unique, and long-forgotten, events reported on Monday, December 18, 1916? More about newsies? Headlines from other days in the early 1900s? Poems about working kids, and the variety of jobs in which they were employed (exploited), who were photographed by Hine for the National Child Labor Committee? What would interest you as a reader?

Come back again--I imagine I'll be sharing more on the project down the road.

Katya, at Write. Sketch. Repeat. is our host for this Friday's Round-Up. I'm going to apologize ahead of time for not answering comments, and not commenting on others' posts today. I'm heading out to the Mass Poetry Festival taking place this weekend in Salem, MA.