I headed to the Peabody Essex Museum in Salem, MA last Saturday to see the Sketchbook Project mobile library. I was hoping to get some idea of the type of end product I should expect to turn in. (For more information about my participation in the Project, click here.)

But first, this rant! Whoever thought it would be a good idea arrange for a mobile library to visit Salem, MA on a Saturday in October, should have their head examined. Salem is an absolute circus in October. It seems to be a mecca for anyone who wants to don a costume, and for those who want to gawk. It took me forever to get through the traffic jam going into the city, and an eternity to find a parking spot. I ended up about a mile away from the PEM. Walking is normally okay, but, it was raining. And it was chilly.

When I got to the PEM, I found that the mobile library was set up outdoors. Yes, I understand how a trailer would require an outside location, but with the huge PEM lobby, there was no reason why the picnic table reading area couldn't have been indoors. It certainly would have been safer for the books! In the rain, there was no way I was going to sit outside, juggle my phone to request a book to "borrow," and sit at a picnic table that had a tendency to tip if two people were sitting at opposite ends and one got up!

Fortunately, I had borrowed my public library's pass to the PEM, so I went into the museum instead. It was a fantastic day to visit the PEM! The atrium floors and walls were covered with painters' tape art created by the visitors. Here's a photo, and a haiku I wrote after observing a child while I sat in the cafe area: 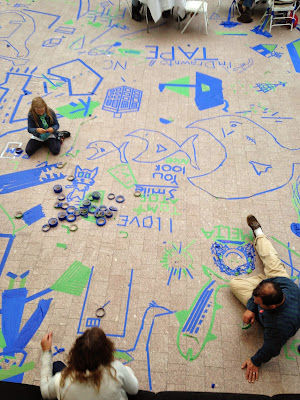 street art:
the girl playing hopscotch
between the lines

There was also a 30-minute sequence of animated films, one of which was Harold and the Purple Crayon. Another was Catson Pawlick, which I posted at KK's Kwotes on Sunday.

The best part of my visit was viewing the Alexander Calder exhibit of mobiles and stabiles. After walking around, I sat in the Calder exhibit area and wrote a few haiku. I suppose they could be labeled ekphrasis--art about art--but, since they are more reflective of viewing an exhibit, I wonder if the term still applies?

I would have liked to take a photo of some of the objects, but, photography of that particular exhibit was forbidden. This is a photo from the PEM site, it shows "La Demoiselle," but what you miss is the exhibit area lighting and the shadow play, which is outstanding, adds a whole other dimension to the viewing, and is what really inspired my haiku. 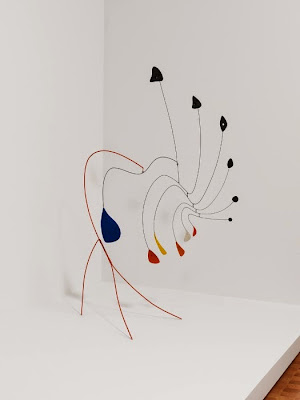 museum guard
his toupee shifts
in the light

When I left the PEM, I found that the rain had stopped and the sun had made an appearance. I was able to borrow several sketchbooks before the library closed. I snapped a photo of two very different sketchbooks. One, from Japan, was primarily manga characters, but, it also had a variety of interesting collage embellishments, for example, the cover and an inside illustration, used crocheted doilies. The other sketchbook, I believe it was from Baltimore, was an incomplete volume of verbal musings and pencil sketches. It ended a few pages before the end of the 32 pages with something like this: Once again, I've run out of time. 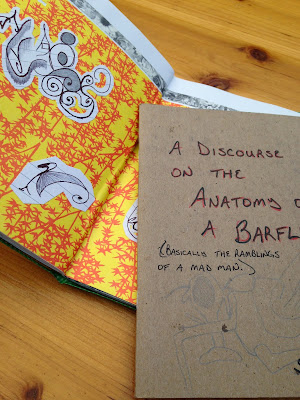 At this point, I'm still not completely comfortable in the direction I'm taking with my project, but, from what I saw on the shelves of the mobile library, anything goes.

To be fair, I think the Sketchbook Project folks must have been pleased with introducing the Project to vast numbers of people who floated by as part of the street show, so my earlier rant is to be taken with a grain of salt! However, to give you the flavor of Salem during October, take a look at this trailer for a 1997 documentary film called Witch City:

Michelle of Today's Little Ditty is today's host of the Round-Up, and, she is currently challenging readers to create a zeno! Visit her blog to learn more about the zeno challenge.

Photos, except for the Calder mobile, and haiku, © Diane Mayr, all rights reserved.