I recently listened to an audiobook of A Moveable Feast by Ernest Hemingway. Hemingway's novels didn't interest me, but I developed a desire to learn about him as a person three years ago after reading The Paris Wife by Paula McLain, watching Woody Allen's Midnight in Paris, and hearing someone speak about Hemingway's letters in a program at the John F. Kennedy Presidential Library--all within a short time.

I came across Z: A Novel of Zelda Fitzgerald by Therese Fowler about a year later. Z presents Hemingway as a cad. I use the word "cad," because in A Moveable Feast Hemingway relates a whole conversation he had with Ford Maddox Ford about gentlemen and cads. Ford, assured Hemingway that he was not a cad. Then last year I saw the HBO movie, Hemingway and Gellhorn. Each of the works presented a look at the man. Who was the real Hemingway? Could a guy who loved cats really be all that bad? 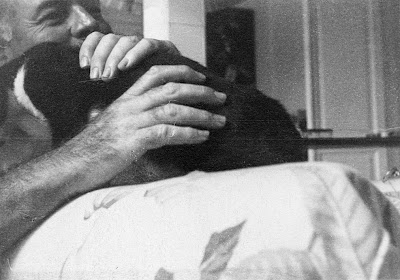 Courtesy John F. Kennedy Presidential Library and Museum, Boston, MA. The Library's Ernest Hemingway collection has a number of photos of Hemingway and his cats.

I thought A Moveable Feast, being written by him and not about him, might provide some insight.

The first thing I realized was that Hemingway was a funny guy! A Moveable Feast was so damn funny I often laughed out loud! The scene in which F. Scott Fitzgerald demands that Hemingway take Scott's temperature was a hoot. (Scott was sure he was on death's doorstep.) Another funny episode involved Ralph Cheever Dunning. Hemingway said, "...Ralph Cheever Dunning, a poet who smoke opium and forgot to eat." He then related a rather odd story of Ezra Pound, who, being fond of Dunning, left Hemingway in charge of a for-emergency-use-only jar of opium in case Dunning went a little crazy in Pound's absence. Dunning ended up throwing the jar at Hemingway, as well as a few milk bottles.

I only know that Ezra tried to be kind to Dunning as he was kind to so many people and I always hoped Dunning was as fine a poet as Ezra believed him to be. For a poet he threw a very accurate milk bottle. But Ezra, who was a very great poet, played a good game of tennis too.

I loved the line, "For a poet he threw a very accurate milk bottle," and it started me on a search for Ralph Cheever Dunning. I found almost no information about Dunning, other than he was born 1878 in Detroit, moved to Paris in 1905, and died there 25 years later (tuberculosis and starvation). There isn't even a Wikipedia entry for him!

A little of his work can be found online. There is a dramatic piece titled Hyllus, published in 1910, and "The Home-Coming" published in Poetry magazine, January 1916, which is short play-poem (I don't know how else to describe it). A sequence of poems appeared under the title, "The Four Winds," in Poetry, April 1925. 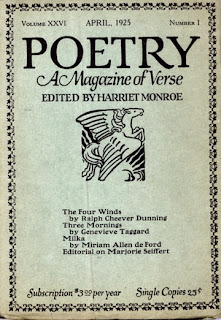 "The Home-Coming" was an interesting little ghost story, but the dozen poems from 1925, didn't do anything for me. I'll leave it to you to read them and decide for yourself! I think Hemingway, in writing "I always hoped Dunning was as fine a poet as Ezra believed him to be," avoided coming right out and saying he considered Dunning to be considerably less talented.

So, what kind of poet was Hemingway? Actually, he wrote short and irreverent verse, generally the type of stuff I like to read. I'm not claiming that they're good, and it seems he never broke free of second grade potty humor (I can't remember ever having read the word "fart" in a poem, but I discovered Hemingway loved to use it.) Before I can decide if he was a fine poet, I'll have to locate a copy of 88 Poems (Harcourt Brace, 1979). Here are two Hemingway poems, which I found online, that make sense to me after just having read A Moveable Feast:

For we have thought the longer thoughts
And gone the shorter way.
And we have danced to devils’ tunes,
Shivering home to pray;
To serve one master in the night,
Another in the day.

There are never any suicides in the quarter among people one knows
No successful suicides.
A Chinese boy kills himself and is dead.
(they continue to place his mail in the letter rack at the Dome)
A Norwegian boy kills himself and is dead.
(no one knows where the other Norwegian boy has gone)
They find a model dead
alone in bed and very dead.
(it made almost unbearable trouble for the concierge)
Sweet oil, the white of eggs, mustard and water, soap suds
and stomach pumps rescue the people one knows.
Every afternoon the people one knows can be found at the café.

Visit Cathy at Merely Day by Day for the Poetry Friday Round-Up.