For many years I participated in Laura Salas's "15 Words or Less Poems" weekly photo challenge. This past year it has been taking me longer to get moving in the morning. However, I couldn't leave the house without posting my challenge poem! As a result, I was getting to work later and later on Thursdays!

After much internal conversation I decided to stop posting poems on Laura's blog, but to continue to be challenged to write a Thursday poem from her photo prompt. What this did for me was allow me to get to work fairly close to "on time," take more care in writing a poem, and, it freed me from the 15 words restriction. Most weeks since January 15, it has worked fairly well, although one haiku took me a week and a half to finish!

After Bathing a Dog

A dog shakes.
Water is flung.
This motion
is explained
by physics
instructors
using words
like centripetal
forces,
frequency,
and mass.
This precision
leaves unanswered
the question of
why the dog does
it with such a
look of vengeance. 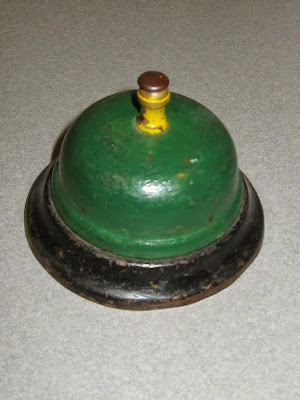 "Please ring the bell for service."

to shattering
the silence.

the floor open
up and swallow

supermarket
iris in a bucket
its wry smile...
royal symbol reduced
to a cheap commodity

his eyes--were they
green-brown or brown-green?
...Valentine's Day

gnarly oak
...the healing hurts more
than the injury

Last week's poem, another tanka, I've made into a haiga. It will be posted on Sunday, so please come back!

I hope to continue with the non-posted weekly challenge poem, and will probably do periodic postings here. I think all the poems can stand alone without the prompt pictures, but if you're curious, click here, then find the date.

The counter bell seen above is one we used for many, many years at the library I work in. It is from a time before we needed two people on the front desk at all times. Despite rumors of public libraries' demise, we're busier than ever. Sadly, though, it's all about the entertainment, not so much about the reading.

The Round-Up for today is found at Robyn Campbell's blog, be sure to stop by.

Photo and poems © Diane Mayr, all rights reserved.
Posted by Diane Mayr at 12:00 AM