Kobayashi Issa, known as "Issa," is one of Japan's haiku masters. He lived a poor and childless life from 1763 to 1828. The Kobayashi Issa website has a brief synopsis.

Issa's haiku deal with the little things in life, including all manner of insects and animals. His compassion for creatures is evident in his work. He also finds humor in his impoverished condition and helps 21st century readers to put their lives in perspective.

Over his lifetime, he wrote more than 20,000 haiku! David G. Lanoue has translated half of them and has them archived here. Please take a little time to browse through. Pick a topic, such as "sparrow" or "frog" or "cat" and settle in.

Here are a few sample haiku from the archive. All of them portray an element of play:


new grass--
a sparrow and I
just playing


the kitten dances
round and round...
falling leaves


the children
make it a playground...
burnt field


just for fun
a game of cards...
clear fall weather

The archive is interesting in that Lanoue presents the poem in Japanese characters, transliterated, and translated. Also included is contextual information so that we can better understand Issa's words and intent.

the old dog
looks as if he's listening...
earthworms sing

One Japanese saijiki, a book of season words with examples, says the following about the expression "earthworms sing" (mimizu naku): "Earthworms don't sing. On autumn evenings, when one says one is hearing the 'jii-jii' song of earthworms, in fact they are referring to mole-crickets"; Kiyose (Tokyo: Kakugawa Shoten, 1984) 296. Shinji Ogawa notes, in modern usage, the expression can refer to any "unknown bugs" singing in the autumn.

This month Michelle Heidenrich Barnes has a clerihew challenge. A clerihew is a simple four-lined poem with a rhyme scheme of AABB. The first line mentions a famous person and the other three usually poke fun at that person. I contributed a clerihew about Issa. I go easy on him and don't ridicule his life, although some people might think a life spent living among, and writing about, bugs is a bit funny! (Please note, I changed one word between the version posted on Michelle's page, and the version I illustrated.)

I've illustrated the clerihew. On my photo editing software, the background has a lovely weathered copper and coral coloring. When I posted it here on blogger, the color is green and orangey. Not at all attractive. What's up with that? Different programs, but the same monitor. Why do the colors change? If anyone can explain it to me, I'd sure appreciate it! 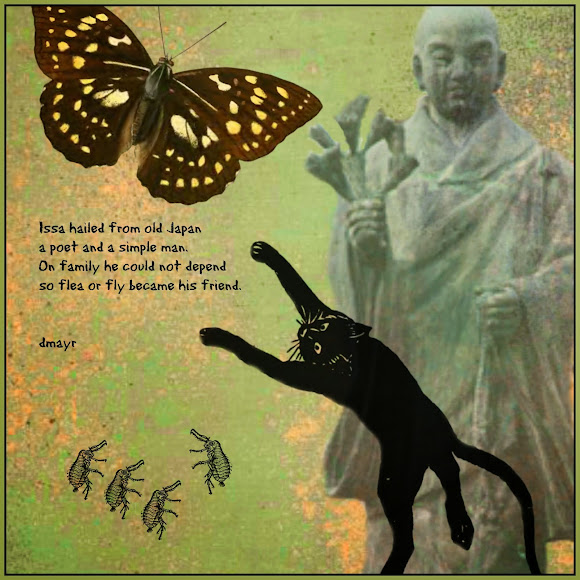 Poem © Diane Mayr, all rights reserved. Photo of Issa statue courtesy Issa Memorial Museum. I have edited it for the illustration.

I'll finish by recommending two children's picture books, which cover Issa and his work: Cool Melons--Turn to Frogs!: The Life and Poems of Issa by Matthew Gollub, and Today and Today: Haiku of Issa illustrated by G. Brian Karas.

Renée is hosting the Round-Up at No Water River. See you there!
Posted by Diane Mayr at 9:00 PM