Last Saturday, on a beautiful late summer day, the first NH Poetry Festival was held in Manchester, NH. Overall, I'd say it was a success!

I'll get the not-so-successful part out of the way first--Charles Simic's reading. Sadly, I was only able to catch about every fourth word. The sound system was not adjusted properly to project Mr. Simic. He tended to step back from the mic when he wasn't reading, but still talking, rendering his humorous asides unintelligible to most. Plus, something that sounded like a giant fan droned continuously in the auditorium. It could be that the poet, at 77, is not as strong on stage as he once was, however, the venue played more of a role in the failure of the reading.

That being said, here is a remark I did catch, "any kind of excess [of one sort or another] in poetry is dangerous." (The bit in brackets, I'm not sure I quoted correctly.)

On to the the workshops:

One, run by NH Poet Laureate, Alice Fogel, "Form & Essence in Poetry," dealt with a poem's look on a page. Alice handed out three poems. She presented them as they originally appeared, and reformatted them (adding white space, eliminating punctuation, changing line breaks). We weren't told which was the original, and so we discussed how the two formats "read." We had to guess which was the original. It was quite an eye-opening exercise. It also pointed out how very differently two people read the same poem!

After the initial discussion of appearances on the page, we had a small writing exercise. We selected one of the poems we had before us, pulled out words from the text, and wrote a new poem. Not surprisingly, I ended up with a haiku sequence. Another person wrote in iambic pentameter, which is the way he most often writes. We are creatures of habit!

The poem I used was by Amy Lowell, "Summer Rain."

All night our room was outer-walled with rain.
Drops fell and flattened on the tin roof,
And rang like little disks of metal.
Ping!--Ping!--and there was not a pin-point of silence between
them.
The rain rattled and clashed,
And the slats of the shutters danced and glittered.
But to me the darkness was red-gold and crocus-colored
With your brightness,
And the words you whispered to me
Sprang up and flamed—orange torches against the rain.
Torches against the wall of cool, silver rain!

I wrote haiku and I set it up so that it follows the seasons--winter through fall.

dead of night
dreams rattled by the ping
of cold rain


whispers
under the covers
...silver rain


Just an aside: Alice Fogel was a wonderful workshop leader, and she is a fine representative for NH as our poet laureate!

Another workshop I attended had to do with Robert Frost's poems of the New England landscape. We had an interesting discussion about the line "I'm going out to fetch the little calf" that appears in the poem "The Pasture." I know I wasn't the only one to learn that to "fetch" a calf on a farm means more than simply bringing the calf back to the barn. Our workshop leader told us it means to separate a nursing calf from its mother so that the mother could be returned to the milking herd. Yikes, that puts a whole different spin on things. (Imagine reading "The Pasture" as a lovely illustrated poem for children after learning the other meaning of fetch.) I looked up the word in my dictionary, which didn't list the definition. I also checked my unabridged dictionary. I'm now wondering what is the real story? I went to Internet Archive: Open Library and found Domestic Animals by D. H. Jacques, published in 1858. It did not use the word fetch when talking about removing a calf from its mother. Nor did John Michels in Dairy Farming from 1907: 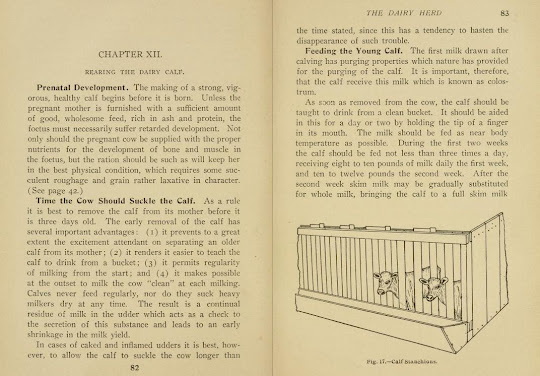 None of my quickly executed research eliminates the possibility that in New Hampshire, it was common to refer to removing a calf as fetching. And it is reasonable, that in his poem, Frost was referring to the removal of the calf at the tender age of three days! More research to be done...

A workshop, titled "The Poetry of Lost Voices," was described,

What role can poetry play in recovering and preserving voices that have been swallowed by the past or made invisible in the present? Voices from history, voices from vulnerable populations—the forgotten, the abused, the enslaved, the neglected. How can we render them alive in our poetry and what are the ethical considerations in doing so? Who has the right to speak for those who can’t speak for themselves? What part should factual, secondary source material play? Where is the line between empathy and appropriation? Three poets read and discuss their process and practice.

It was fascinating workshop, but, I don't think I'm any closer to finding the answers to all the ethical questions (like, "can you write outside your own ethnic group?" or "if I'm writing about lost voices, am I guilty of preventing those who are still living from using their own voice to tell the story?"). However, it is my opinion that a writer needs to make sure that the reader knows, without a doubt, that the voice of the person being written about is strictly the result of the imagination of the writer. Admittedly, this is easier to do with people who are long dead! 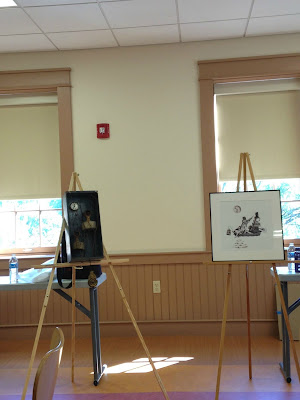 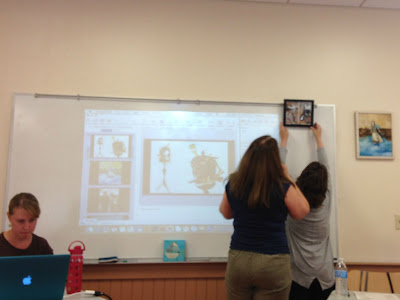 Some of the art used in the collaborative program. Photo by Diane Mayr.

The final workshop I attended was "Ekphrastics and Collaboration," which was a presentation and discussion of a special project undertaken by three poets and three artists. Ekphrastic, is one of my favorite types of poetry. (If you aren't familiar with ekphrasis, it is art about art. Here's a link, which was on the workshop handout; it has many examples http://cunydictspring2010.wikifoundry.com/page/More+Ekphrastic+poetry. Or, you can click on this link where you'll find examples from my work.)

Bravo to the festival organizers! I look forward to the second annual NH Poetry Festival.

Also, if you live in NH, you may want to attend "A Granite State Evening With Laureates Three," a benefit fund raiser, with plenty of poetry! Click here for more information.

Janet will be hosting the Poetry Friday Round-Up this week at Poetry for Children.

I'm on vacation, so I may take a bit of time to respond to comments or other peoples' posts.