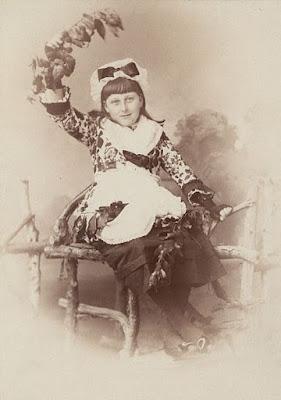 Last month, I wrote a haiku sequence using words from an Amy Lowell poem. It led me to take another look at Lowell's poetry, and to reaffirm that Amy Lowell is one of my favorite poets! Here are two reasons that come immediately to mind: 1. She wrote small poems, and even some "hokku." Of course, she wrote long poems, too, but those I do not read (hey, just being honest). 2. She was obsessed with color and ways of describing them (see "Thompson's Lunch Room: Grand Central Station"). In a world full of color, why not take the time to appreciate it?

When night drifts along the streets of the city,
And sifts down between the uneven roofs,
My mind begins to peek and peer.
It plays at ball in odd, blue Chinese gardens,
And shakes wrought dice-cups in Pagan temples
Amid the broken flutings of white pillars.
It dances with purple and yellow crocuses in its hair,
And its feet shine as they flutter over drenched grasses.
How light and laughing my mind is,
When all good folk have put out their bedroom candles,
And the city is still.

Throw the blue ball above the little twigs of the tree-tops,
And cast the yellow ball straight at the buzzing stars.

All our life is a flinging of colored balls
to impossible distances.
And in the end what have we?
A tired arm--a tip-tilted nose.

Ah! Well! Give me the purple one.
Wouldn’t it be a fine thing if I could make it stick
On top of the Methodist steeple?

This afternoon was the colour of water falling through sunlight;
The trees glittered with the tumbling of leaves;
The sidewalks shone like alleys of dropped maple leaves,
And the houses ran along them laughing out of square, open windows.
Under a tree in the park,
Two little boys, lying flat on their faces,
Were carefully gathering red berries
To put in a pasteboard box.

Some day there will be no war,
Then I shall take out this afternoon
And turn it in my fingers,
And remark the sweet taste of it upon my palate,
And note the crisp variety of its flights of leaves.
To-day I can only gather it
And put it into my lunch-box,
For I have time for nothing
But the endeavour to balance myself
Upon a broken world.

Amy Lowell died in 1925, so most of her work is in the public domain. Check out Open Library to read it online or download as an ebook.

Now it's time to see what Jama's got cooking for the Round-Up at Jama's Alphabet Soup.